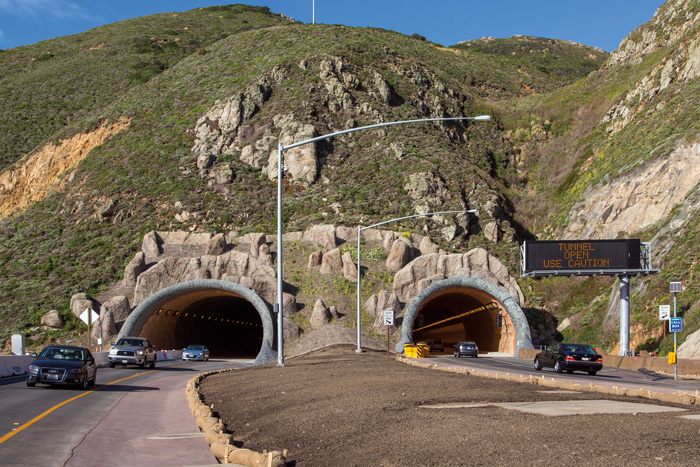 After a heavy winter rain, residents of Pacifica and Half Moon Bay, Calif., would wake up wondering if the highway they depended on daily still would be there, or if it had slid once again into the Pacific Ocean.

Notorious for rock slides and collapse, a section of scenic State Route Highway 1 — aptly named the Devil’s Slide — had been closed nine times in the past 28 years with the longest closure lasting 158 days. Commutes between the two cities, an easy 7.5 miles normally, became 45-minute slogs for the 20,000 motorists who traveled the route daily.

When twin, state-of-the-art tunnels opened on March 26, 2013, providing safe passage from the Devil’s Slide, they were dubbed the people’s tunnels and hailed as an unprecedented grassroots victory because no highway tunnel had been constructed in California since 1964.

Better than the Alternative
In 1995, public opposition to a proposed four- to six-lane highway bypass prompted a federal mandate for the California Department of Transportation to reconsider a tunnel alternative.

“Following a reaffirming feasibility study, San Mateo County voters approved by 74 percent a ballot measure in 1996, requiring adoption of the tunnel alternative,” said Moe Amini, Caltrans’ design contract manager/task manager for the tunnels project. “It is one of only a few projects ever determined by popular referendum in California.”

In 2001, Caltrans retained HNTB to serve as lead tunnel designer and introduce the department to modern tunneling practices. HNTB worked with Caltrans to prepare plans, specifications and estimates and supported an extensive public outreach campaign. The solution, one of the largest and most complex projects in California’s history, would include: 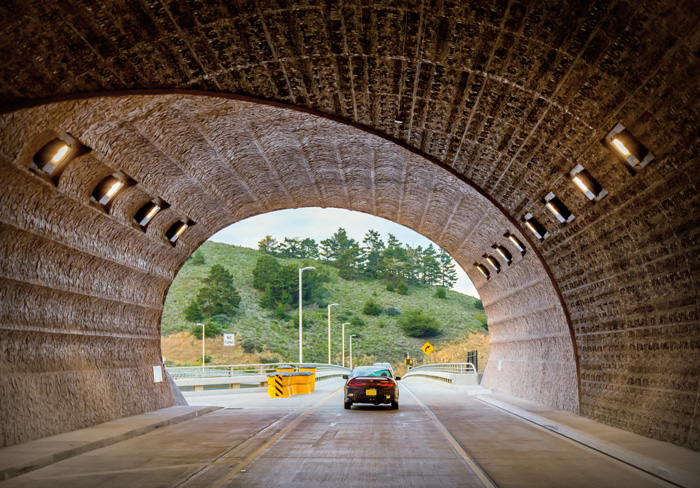 Devil of a Job

1. Underground hurdles.  The alignment proceeds south from Pacifica, departs from existing State Route 1 along a 7-percent uphill grade, crosses a valley at Shamrock Ranch, passes through a small ravine, enters the horseshoe-shaped tunnels 650 ft below San Pedro Mountain and exits the tunnels just south of the Devil’s Slide area where it rejoins the highway.

As part of an extensive geologic baseline report, the project team drilled several bores along the proposed alignment and extracted rock cores. Laboratory tests performed on the rock cores provided engineers the data necessary to identify and categorize several rock types that would be encountered during excavation.

In addition, studies indicated there was significant groundwater flows. In the north side of the tunnel, for example, crews encountered excessive water flow from a fault acting as a drain, collecting groundwater from the rock mass. Three holes were drilled through the fault, draining more than 10 million gallons of water to keep the tunnel headings dry.

2. High seismicity.  Because they lie along the active San Andreas Fault and four inactive fault lines, the tunnels had to withstand a 7.5 to 8.0 magnitude earthquake, the maximum movement estimated for this arm of the San Andreas Fault.
After a design seismic event, the tunnels were to remain serviceable and have experienced only “repairable” damage, completed within 90 days and with lane closures during off-peak traffic periods only.

3.  Environmental sensitivity. Federally protected Peregrine falcons nested above the alignment and California’s endangered red-legged frogs were found living in the Shamrock Valley wetland area. The tunnels’ alignment was carefully chosen to respect these environmental concerns. In addition, no equipment was allowed to enter the wetland area. Crews cordoned the area with frog fences and conducted extensive wetland monitoring to ensure the animals’ safety.

To further minimize the project’s impact to the environment, twin, balanced, cantilever cast-in-place segmental concrete box girder bridges were constructed over Shamrock Ranch. Designed in-house by Caltrans, they are the first bridges of their kind in California.

California’s First NATM Highway Tunnels
The tunnels’ length and the challenging ground conditions did not lend themselves to a tunnel boring machine technique. Instead, the New Austrian Tunneling Method, a sequential excavation and support tunnel-mining technique, was chosen.
This flexible, adaptable method relies on observation of ground behavior during excavation, which facilitated unprecedented in-field team collaboration. Based on instrumentation and monitoring of the rock deformation, geologists and engineers adjusted the rock supports on the fly. This allowed the tunnel to be constructed safely, timely and at a reasonable cost.

NATM incorporates the strength of the surrounding rock during construction and uses a double-shell support system. The system consists of an initial lining of sprayed fiber-reinforced shotcrete, rockbolts and lattice girders. Once a section was excavated, crews installed lattice girders and then quickly applied an initial 6-in. layer of shotcrete. The shotcrete included structural synthetic fiber to meet specified deflection requirements, a novel approach in the United States. The final lining, designed to accommodate seismic forces, was constructed from reinforced concrete. It was applied after rock dowels and other pre-support measures were implemented. The initial support and final lining are separated by a waterproofing and tunnel drainage system.

Tunnel excavation was accomplished using top heading, bench and invert. Both tubes were excavated 60 ft apart and simultaneously, beginning at the southern portals. Each time crews encountered a different rock type, they had to swap out an entire set of machinery. To improve excavation efficiency, the bench was excavated the full length of the reach prior to the installation of the invert.

In addition to two-dimensional numerical models of tunnel cross-sections, the HNTB team prepared 3-D structural analysis models for a typical cross-passage and the transition of the tunnel to the north portal. Construction of the 10 cross-passages, which connect the two tubes, changes the rock stress field that impacts both tubes; therefore, to assess the impact of constructing the cross-passages on the stresses in the rock and, subsequently, the stresses in the tunnel liner, 3-D numerical modeling was required.

Tunnel Vision
The new $430 million Tom Lantos Tunnels, named after the late Congressman who secured the emergency federal funding, are among the safest in the nation, meeting every requirement of the National Fire Protection Association’s 502 Code and the Americans with Disabilities Act.

In addition, Caltrans will have a greater level of confidence going into the next tunnel project. “With modern specifications now in place, the next tunneling project should be much easier, comparatively,” Amini said. “The tunnels set the standard for the state. Caltrans simply can tell future designers and contractors to follow the design standards and specifications developed for the Tom Lantos Tunnels.”

As one resident put it, “Having tunnel vision is sometimes the broadest vision of them all.”

This article was contributed by HNTB Corporation.