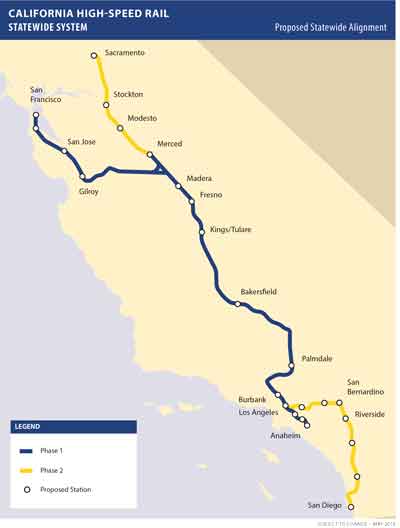 As part of the effort to advance the Silicon Valley to Central Valley Line of California’s high-speed rail program, the California High-Speed Rail Authority (Authority), along with its geotechnical consultants Kleinfelder Inc. and Fugro Consultants, have been conducting geotechnical explorations in the City of San Jose and Santa Clara County starting in January and continuing into the spring.

This work – which will result in over 60 test locations – is a continuation of the work that began in 2016 in the Pacheco Pass along State Route 152 that will assist the Authority in determining geological and hydrological conditions near locations close to the proposed alignments in the San Jose to Merced project section. A final alignment alternative through this area has not yet been selected, and will be done so through a public environmental review process.

Unique to this work, Fugro crews performed geophysical surveys to measure surface wave velocity, also known as Rayleigh Waves, at three locations in the project corridor. Rayleigh Waves are track and ballast movement resulting from train-induced vibrations. The track ballast forms the bed upon which the train rails are laid. These tests will help in determining if the ground and embankment could be subjected to these Waves and whether the ground is strong enough to avoid the Raleigh Wave phenomenon.