You are at:Home»Featured Stories»Cement Grout vs. Chemical Grout: Which One to Use, When, and Why 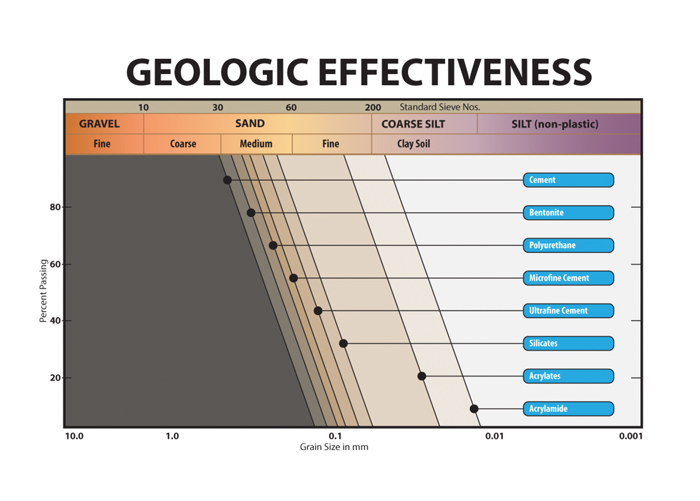 Cement and chemical grouts are effective in a range of ground conditions.

Used on a myriad of new and rehabilitation construction projects, cementitious and chemical grouts share a common category and name, but the distinct differences far outweigh the common qualities. Both grout types are used in civil applications ranging from sewer pipe rehabilitation to new tunnel or shaft construction, used to fill narrow cavities/cracks, rock fissures or to permeate soils for the control of groundwater, void filling or to increase structural support of the geology. Although cement and chemical grouts can differ in composition, application and cost, they are ultimately complementary products on the same projects. This paper will explore when and why to use the various types of grouts and the cost range of each product.

The practice of injecting grouts and the wide array of grout products available can make choosing the right grout for the project complicated. Because it’s difficult to summarize the complexity of the topic into a single paper, some specific topics within this paper have been generalized for simplicity. If a situation exists on your project where grout injection is required, a qualified grouting contractor and an experienced grouting consultant should be engaged to provide grouting and installation recommendations and a knowledgeable grout supplier, like Avanti International, should be consulted to assist with proper grout selection. 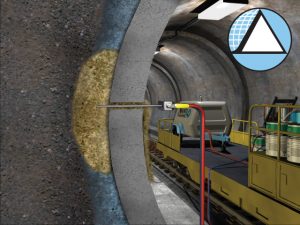 Grouts and gels can be used to create an effective, long-lasting water barrier, as well as soil stabilizer.

Grouts used in civil construction and rehabilitation projects can be generally categorized into either a cement or chemical grout. Within each grout family, there are primary grout subtypes: within the cement grout family, ordinary Portland cement and ultrafine cements define these subtypes. The chemical grout family includes sodium silicate, acrylic gels and polyurethane expansive foams. Although each parent grout type has primary grout spawns, this is where the commonalities end and the individual grout types split into their own unique characteristics.

Cement grouts are considered to be suspended solids grouts, because they have particulates that comprise their composition which is derived from grinding Portland cement clinker. The level of grinding effort applied to the clinker determines the average particulate size. Portland cement grout generally has particulate sizes on average of 15 microns. Microfine cements range from 6 to 10 microns while ultrafine cements can have average particulate sizes of 3 to 5 microns. US Grout in Malad, Idaho, can provide custom blended cementitious grouts meeting project specific requirements.

A grout’s ability to penetrate a rock fissure largely depends on particulate size whereas its ability to permeate a soil is also dependent upon surface tension within the grout. A cement’s rheology, which is the grout’s ability to flow, is accomplished through the control of the water/cement ratio and almost always a superplasticizer is added to reduce viscosity. While additives can be added to slow the cure time, once mixed with water, cement grouts will begin to cure and create high compressive strength. Once injected, cements are considered long-term solutions for either water control or structural improvement having lifespans ranging between 100 to 200 years. Ordinary Portland cement costs (mixed) will typically range between 1 and 2 dollars a mixed gallon while microfine/ ultrafine cements costs (mixed) will typically range between 3 and 4 dollars per mixed gallon. These costs can further reduce when higher water/cement ratios are employed.

The primary types of chemical grouts (silicates, acrylics and polyurethanes) are each unique in composition. Although it’s truly a suspended solids grout, because the particulates are so small sodium silicates have a high degree of penetrability into soils and rock, very similar to the true solution grouts, which have no suspended solids.

Sodium silicate is a two-component grout that typically has very low viscosity but will often expunge water after gelling by a process called syneresis. Sodium silicates can be sensitive, bordering on unstable, when injected into any groundwater condition. With relatively short gel times, a few minutes to a few hours, sodium silicates are commonly used as temporary solution for water control or structural support with an estimated life span of a few years. Longer life spans can be experienced with silicates depending on the chemistry of the soils. Sodium silicates typically range between 2 and 3 dollars per mixed gallon.

Colloidal silica grout was developed to reduce the issue of syneresis with sodium silicates, to provide better control of gel times and achieve a lower viscosity. Colloidal silica grout is prepared in a multiple step process where a silicate solution is partially neutralized, leading to the formation of silica nuclei. Colloidal silica has the same expected life span as sodium silicate, but because of the multiple step process for development, prices are considerably higher, ranging from 13 to 15 dollars per mixed gallon.

Acrylics are defined as “true solution grouts,” which are free of suspended solids and have extremely low viscosity – similar to water. The acrylic family consists of acrylamide and acrylates. Each type requires a base resin to be mixed with a catalyst in order to create a gel matrix within a soil or rock with a controllable gel time. Acrylamide changes from a liquid to a solid in a controllable gel time ranging from 3 seconds up to 10 hours. Acrylate gel times range from approximately a minute to one hour. The life span of an acrylamide is estimated to be greater than 300 years while an acrylate is estimated to be approximately 50 years. The cost of acrylamide gel will typically range between 6 and 8 dollars per mixed gallon while acrylates are slightly more expensive, ranging between 8 and 10 dollars per gallon.

There are two primary types of polyurethane grouts defined as hydrophilic and hydrophobic. Hydrophilic grouts are typically single component systems that react with water and cure to an expansive flexible foam or non-expansive gel requiring a moist environment after curing. Hydrophobic expansive foams require little water to react, approximately 4%, and easily withstand wet/dry cycles. True hydrophobic foams, not requiring water to react, also are available. Hydrophilic foams expand 4 to 6 times their original volume, while hydrophobic foams expand up to 20 times original volume and may cure flexibly or rigidly. Most manufactures carry polyurethane resins having NSF or UL certifications approving use in potable water applications. The life span of polyurethane foam is estimated to be approximately 75 years. The cost of polyurethane resins (before expansion) will typically range between 60 and 80 dollars per gallon, uncured. It should be noted that the cost of polyurethane foams reduce drastically when one factors the expansive component of the material into the overall costs.

Cement and chemical grouts are used in a wide variety of construction projects ranging from new construction to rehabilitation. For example, Portland and ultrafine cement grouts are predominantly used to stabilize soil and/or control water in civil projects including earthen dams, levees, mines, tunnels, subways, vertical shafts, below-ground structures or waste encapsulation. These types of large-scale projects will often require significant volumes of grout to be injected. Chemical grouts will often complement the cement type grouts and in some cases will be the predominant grout used for a particular situation.

On many civil projects where grouting is expected to occur, the engineer of record or grouting consultant will have prepared a grouting program defining which type of grout is planned. In some cases, however, the need for water control or soil stabilization is not anticipated and a grouting program is developed quickly. The type of grout material used for injection for an immediate need generally runs through a trial-and-error process. Because of the economic advantage, Portland cement grout will often be the first attempted. If geologic conditions won’t accept the Portland cement grout, then an ultrafine cement grout will be utilized. If Portland or ultrafine cements are successful, an acrylic resin like acrylamide will often not be employed.

Grouts are also used extensively in the rehabilitation of deteriorating sanitary sewer infrastructures, concrete dams or below-grade structures. Generally for these types of projects, acrylic gels and polyurethane foams are used. Both are used to seal leaking cracks and joints. However acrylamide gel is predominantly used in the pipeline system whereas the polyurethane foams are used in and around manholes and vaults. Where voids have occurred behind below grade structures, the highly expansive polyurethane hydrophobic foams are commonly used to fill the void. Some specially designed polyurethane foam is also used for the lifting of concrete slabs, which provides structural support by using a lightweight solution that won’t promote additional slab settlement. Cured structural foam weighs approximately 4 lbs pounds per cubic foot compared to much heavier mudjacking material.

When faced with the need to stop leaks, stabilize soil, or control water, it is recommended that a qualified grout consultant and grout injection contractor be engaged to provide installation recommendations and a knowledgeable grout supplier should be consulted to assist with proper grout selection.