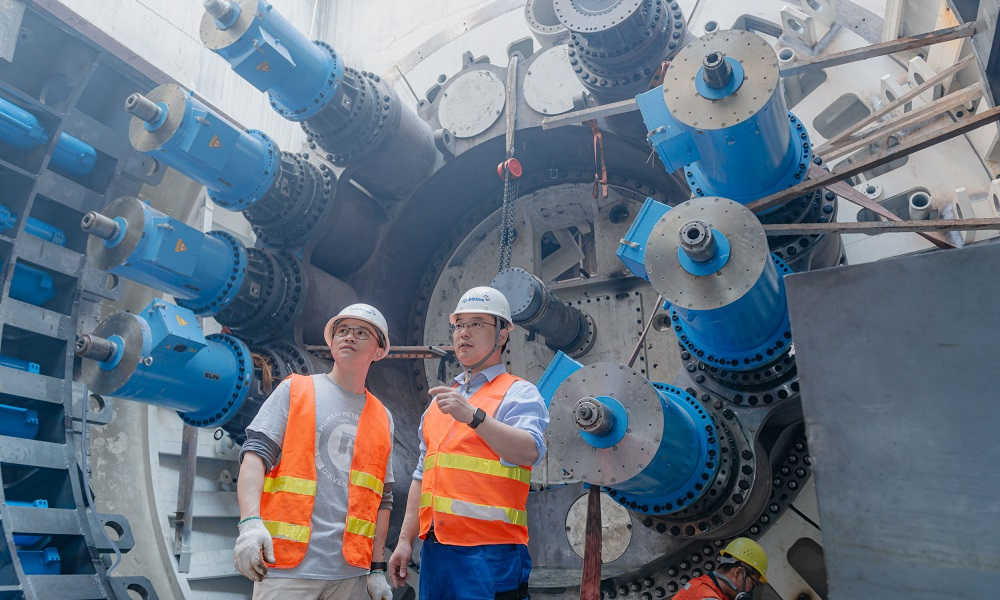 The machine is optimized for rapidly changing conditions with two-speed gear reducers known as the Robbins Torque-Shift system for efficient tunneling in hard, mixed, and soft ground.

The machine will encounter various ground types during its bore, from moderately to strongly weathered argillaceous shales and sandstone to mixed face conditions. Much of the rock is fractured, while the quartz content is as high as 50 percent. “Not only are there poor ground conditions such as soft to hard uneven, fractured zones and full-face hard rock, but these sections appear to alternate frequently, which is the biggest challenge of the project. It will be a test of performance and tunneling efficiency for the machine,” said Yongsheng Qi, Project Manager for Robbins China.

The tunnel is also expected to cross under rivers and other bodies of water with a cover of 20 to 31 m (65 to 100 ft). The ground strata connects to the river and is highly permeable, resulting in expected water pressures above 7 bar. The project’s success lies in stabilizing the water pressure at the face while ensuring acceptable advance rates and construction safety.

The Crossover TBM features both hard rock and EPB modes and is optimized for the rapidly changing ground found on the project. An adaptable cutterhead design and two-speed gear reducers known as the Robbins Torque-Shift system enable efficient tunneling in hard, mixed, and soft ground.  An adaptable screw conveyor can be mounted in the center or bottom of the mixing chamber depending on the mode. To combat high water pressures the machine is fitted with high pressure seals and can statically hold up to 30 bar. The XRE TBM began its excavation in EPB mode and will shift to hard rock mode to continue excavation after 1.5 km (0.9 mi) has been bored.

The unique project is one of several mixed ground operations using Robbins Crossover TBMs in China. Two 6.91 m (22.6 ft) diameter XRE machines are currently boring sections of the Chongqing Metro Phase 2 in ground conditions ranging from weathered mixed granite to weathered pegmatite and adamellite. The project is under the same contractors as the Pearl River Delta bore.

“At the Chongqing Metro project, we won the trust of the contractor with the performance of the Crossover machines; to date the highest monthly advance rate in Chongqing is 365 m (1,197 ft). This is one of the main reasons the contractor again selected a Robbins Crossover TBM for the Pearl River Delta project,” observed Qi.

With rates at Chongqing Metro as a precedent, the Pearl River Delta tunnel is scheduled to be completed by the end of 2021 and put into operation in 2023.