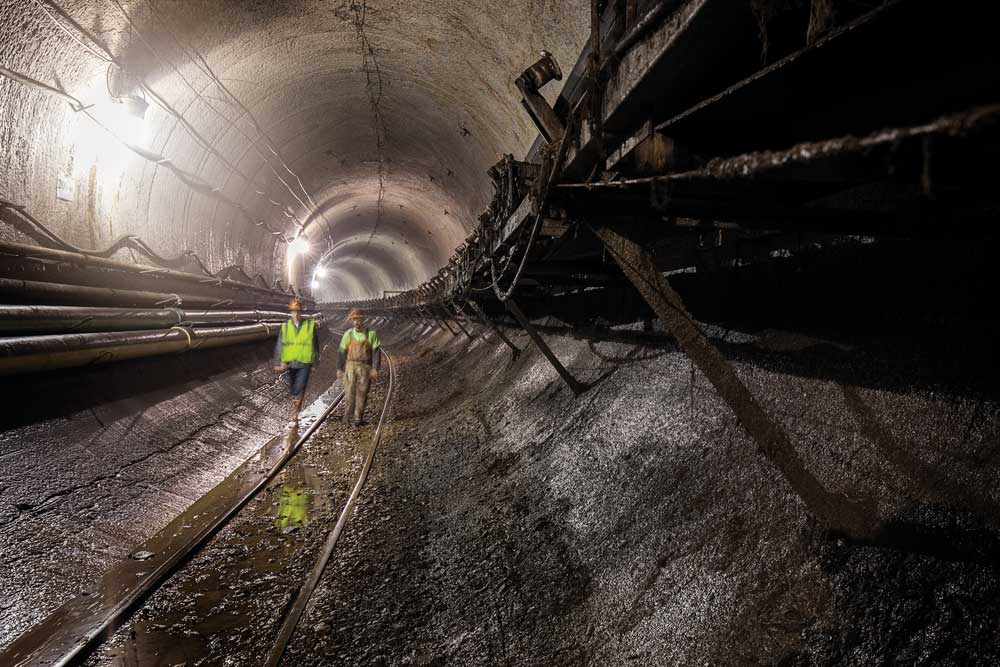 In its longest iteration at the DRTC the Robbins continuous conveyor extended to 25 km (15 miles) of belt (total span of the belt—the tunnel measures 12.5 km (7.5 miles) in length) and traveled through two unprecedented 90-degree curves.

On April 10, 2019, crews celebrated the breakthrough of a Robbins Main Beam TBM below Indianapolis, Indiana. The smooth completion was anything but run-of-the-mill: the vast network involves 45 km (28 miles) of limestone and dolomite tunnels all being excavated by one 6.2-m (20.2-ft) machine and continuous conveyor system.

The hard-working TBM and the Shea–Kiewit (S-K) JV, which owns and operates the machine, completed the 8.5-km (5.3-mile) White River Tunnel and the 2.9-km (1.8-mile) Lower Pogues Tunnel as part of the DigIndy Network. The next phase of excavation will be to bore the Fall Creek and Pleasant Run Tunnels.

“The TBM has done very well and continues to do well. There were no major machine issues on these runs; the cutterhead was new from the Deep Rock Tunnel Connector (DRTC) and we’ve had no major problems,” said Christian Heinz, Project Manager for S-K JV.

However, the DRTC was far from the TBM’s first job. The machine, originally built in 1980, has been used on New York City’s Second Avenue Subway, as well as projects in Massachusetts and Canada. Once the machine has completed the DigIndy network of tunnels, it will have bored more than 63 km (39 miles) of tunnel — an achievement making it one of the most prolific Robbins TBMs ever used.

S-K JV has until 2024 to complete all of the tunnels for owner Citizens Energy Group. Once complete, the EPA-mandated deep tunnel system will reduce the amount of raw sewage overflows and clean up the White River and its tributaries. The $2 billion program is projected to reduce combined sewer overflows into the area’s waterways by 97 percent. 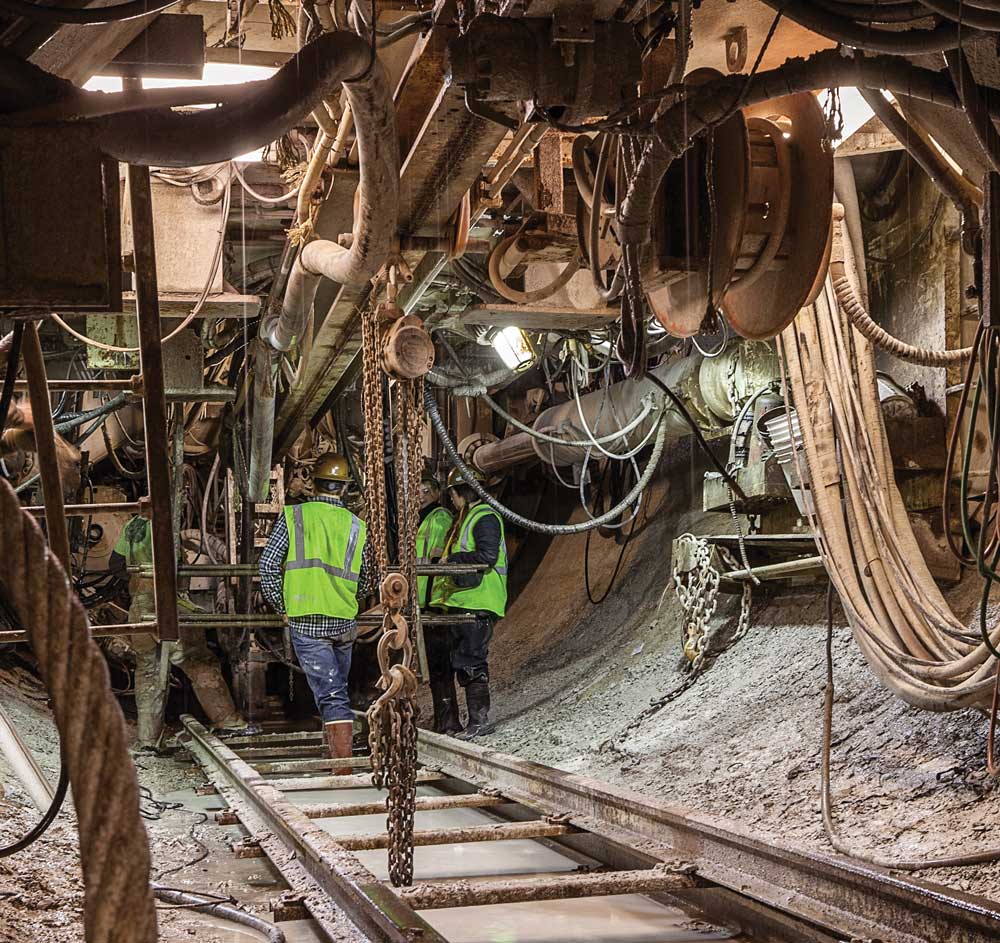 The machine was launched most recently from the 67-m (220-ft) deep White River shaft in September 2016 following a refurbishment that included new motors, gearboxes, electronics and other elements. About 1 mile into the White River Tunnel, the drive bifurcated eastward on the Lower Pogues Run Tunnel in front of Lucas Oil Stadium in downtown Indianapolis. After excavating the offshoot, the machine then had to be backed up to the bifurcation point before continuing north for completion of the White River Tunnel, and that wasn’t the only area where the machine had to be reversed. “We backed up the machine about 6,000 m (20,000 ft) during the course of mining these two tunnels. There were two branches off the main line that were each about 3.2 km (2 miles) long,” said Max Engen, Project Engineer for S-K JV.

In areas where the machine will need to be backed up crews use swellex bolts and split sets for ground support in the limestone and dolomite rock. “These types of support fit tighter against the rock so we don’t hit the side and roof supports when we back out,” Engen said. Each time the machine is backed up the crew must also remove the side-mounted tunnel conveyor directly behind the TBM.

Despite some challenges, the Robbins TBM achieved advance rates as high as 298.2 m (978.4 ft) in one week and 84.0 m (275.6 ft) in 24 hours. “The Robbins team is always a big help. They helped design new trailing gear decks for our pre-excavation grouting setup. We conduct probe drilling and grouting when necessary,” said Engen.

As the machine bores, Robbins continuous conveyors remove muck in an extensive system that has proved highly successful. Much of the conveyor structure has remained the same throughout excavation of the DRTC, White River and Lower Pogues tunnels, with new horizontal and conveyor belting provided. The conveyors wound through curves as sharp as 300 m (1,000 ft) in radius on the two most recent tunnels, as they follow the path of the White River overhead. The curves span a distance of 3,520 m (11,540 ft) or just over 30 percent of the tunnel lengths. 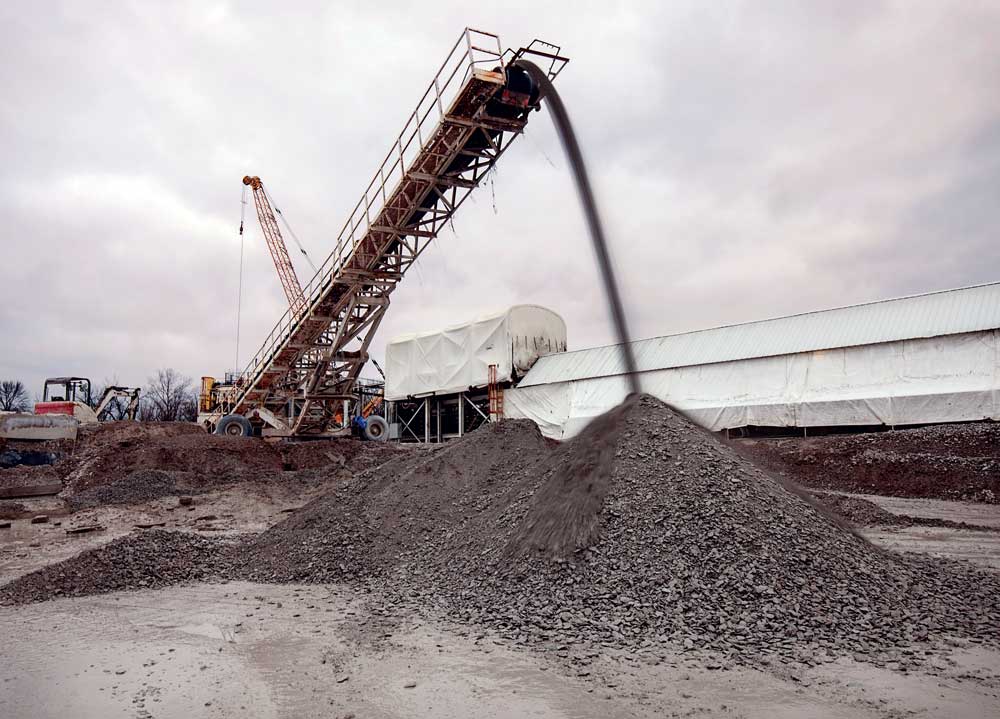 The Robbins continuous conveyor system, like the TBM, is a proven structure that has been refurbished and previously used on three other tunnel projects before the DigIndy Tunnel.

In its longest iteration at the DRTC, the continuous conveyor extended to 25 km (15 miles) of belt (total span of the belt—the tunnel measures 12.5 km (7.5 miles) in length) and traveled through two unprecedented 90-degree curves, drawing muck up a 76-m (250-ft) deep shaft using the vertical belt.

Crews upkeep the belt with rigorous maintenance during every shift, including tracking, placing and replacing rollers, making sure boosters are running right, and looking at oil levels. A belt monitoring system that tracks belt tension and other parameters aids in maintenance. “Overall when properly maintained, the conveyor system runs really well. Dean Workman and Tommy Bess from Robbins’ Conveyor Division were an important part of it all. They came out to the site to teach proper maintenance on the belt and are available for ongoing training with the crew,” said Heinz.

The continuous conveyor system, like the TBM, is a proven structure that has been refurbished and previously used on three other tunnel projects before the DigIndy Tunnel. The long-haul nature of the conveyor system is helped by its heavy structure, up to 33% heavier than other manufacturers on the market. “The system at Indianapolis was originally used on the Parramatta Rail Link, a record-setting project in Australia, then on a tunnel in Atlanta, Georgia. It says a lot for our refurbished equipment,” said Dean Workman, Robbins Vice President of Conveyor Systems. “There are other systems out there with components that are at least 25 years old. Like all equipment, proper maintenance and storage in a dry place is key.”

With the breakthrough behind them, S-K JV is now working on the 6.2-km (3.9-mile) Fall Creek Tunnel, which will include 11 drop shafts to depths of over 60 m (200 ft). The White River Tunnel retrieval shaft is also the launch shaft for the Fall Creek Tunnel, meaning none of the equipment had to be removed to the surface. “No major rebuilds were required of the TBM after tunneling. We have already started up again and are now about 300 m (1,000 ft) into Fall Creek. We will do some maintenance for about a month and a half before we move our conveyor system,” said Engen.

The conveyor system, which is still at the White River launch shaft, will be dismantled and moved to the Fall Creek Launch shaft as the machine bores forward. This will be the second time the team has dismantled and reassembled the conveyor system, and it will happen again when the TBM completes its last tunnel at Pleasant Run, a final 11.9-km (7.4-mile) deep leg consisting of 8 drop shafts that will capture 30 combined sewer overflows.

While work is ongoing, the S-K JV team is proud of what it has been able to achieve with a single TBM. “The credit goes to all the hardworking men and women involved with this project. The machine has been underground for 32 months, and it’s been a long road to get to this point, but we believe our team will get the job done,” said Heinz.

This article was contributed by The Robbins Company.