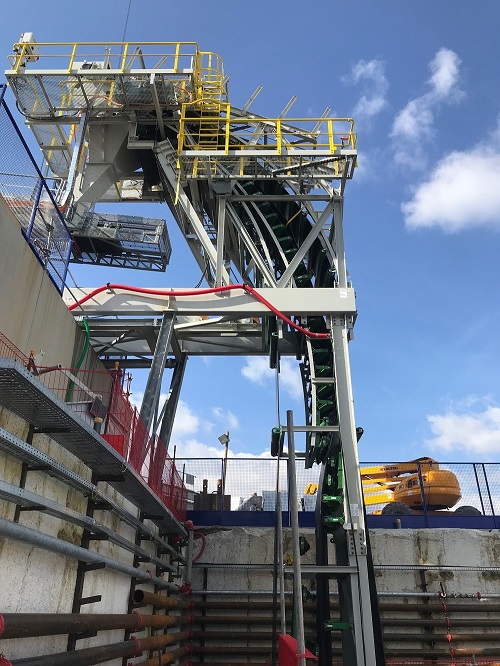 Dos Santos International in cooperation with H+E Logistik, have provided two of their DSI Sandwich belt high angle conveyors to the Paris tunneling project. The DSI GPS (Gently Pressed Sandwich) is elevating tunnel muck at a design rate of 800 t/h and at a 90° angle.

The Grand Paris Express is the largest transport project in Europe. The extension is a $25 billion expansion of the century-old Paris Metro. Construction work began mid-June 2016 and is due to last until 2030.

A particular challenge of this project was the requirement to provide a versatile system that will be reusable in future projects. Accordingly, Dos Santos International designed a system with a high degree of versatility – particularly extendibility. With all the drive and take up equipment located at the head end, DSI designed the vertical portion as a hanging structure which can be extended as necessary for higher lifts at future applications. The two conveyor designs at the two sites in Paris are nearly identical, with only a small difference in the length of the vertical portion. DSI designed both conveyors for the possibility of increasing the lift to 40-45m. The two conveyors in Paris have vertical lifts of 24.6m and 26.3m respectively and can be used for any intermediate height up to 45m. This makes them very versatile for use at future sites.

Generally, and particularly in tunneling projects, a recurring challenge is to accomplish the sandwiched, curved transition from the low conventional loading angle, up to the, typically vertical, high angle in the tightest space, while conforming to the vertical radius of curvature constraints of troughed belts. This is something DSI understands very well. Often, others offer transition curves that are too tight resulting in premature failure of the belt due to edge overstress and material spillage due to the belt’s relaxation at the middle. Dos Santos International has proven they can always solve these problems without compromising the technology, performance and belt life.

The DSI Sandwich high angle conveyor continues to be the optimal choice for tunneling. DSI Sandwich belt high angle conveyors take on many forms and offer many advantages. Each DSI Sandwich Conveyor uses two standard, smooth-surfaced conveyor belts, face-to-face, to gently but firmly hug the product being carried. This not only makes steep angles possible; it also offers a spillage free, environmentally sound operation because the material remains secured between the belts. In this instance, the wet muck can be continuously scraped from the belts eliminating carry back.

A DSI sandwich conveyor is capable of higher conveying speeds and greater capacity than other high angle conveying methods. The availability of wide belts and hardware makes capacities greater than 10,000 t/h easily achieved with a DSI Sandwich conveyor. High angles of 90° are typical, and lifts of 300m are easily accomplished.

The use of all conventional conveyor parts ensures high availability and low maintenance costs, as well as interchangeability of components and fast delivery of replacement parts.