You are at:Home»News»Easing Flooding In Wisconsin 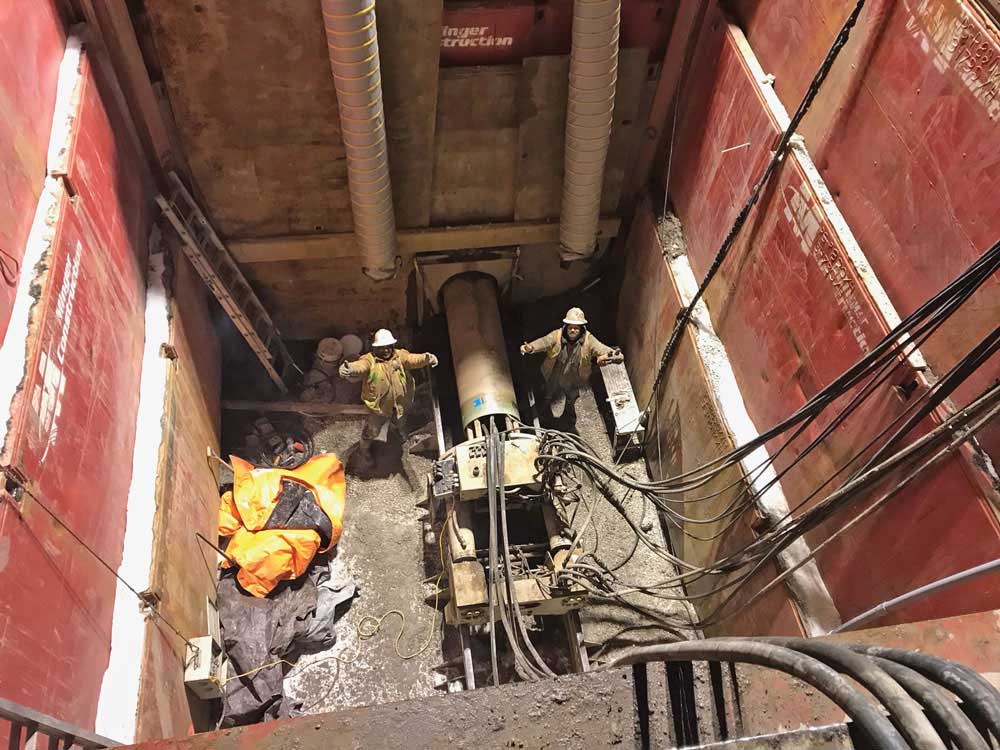 In response to flooding issues that resulted in numerous basement backups in 2014 and 2015, the City of Mequon (Wisconsin) Sewer Utility District in 2016 commissioned a study for a wet weather relief sewer to increase capacity. The study led to what became the East Trunk Sewer Project, the design of which began in 2017. The design team goals were to minimize impacts to residents, business, traffic, and preserve the quality of life. The design, completed by R.A. Smith Inc., includes trenchless and tunneling construction methods for the new sewer. The construction cost of tunneling can be more expensive but not as disruptive as open-cut sewer construction with road restoration.

Minger Construction Co. Inc. of Jordan, Minnesota, was awarded a $14.8 million contract to build the East Trunk Sewer and began construction in 2018. Minger provides a variety of site work and underground construction services. It started out as an open-cut contractor and has been involved in the trenchless and tunneling market since 2008. For its tunneling equipment, Minger turned to NUCA Sustaining National Partner Akkerman Inc.

The East Trunk Sewer consisted of 2 phases of trenchless excavation comprising 24- and 48-in. pipe. Minger teamed with J&J Boring Inc. of Winfield, Missouri, to accelerate the construction schedule. In total, crews installed 8,046 ft of 48-in. Hobas pipe (20-ft pipe lengths) and 1,053 ft of 24-in. Hobas pipe (10-ft lengths) over two phases. Another 1,366 ft of relief sewer was constructed via open-cut.

For the 24-in. pipe installation, Minger Construction elected to use the guided boring method (sometimes referred to as pilot tube microtunneling). Guided boring is typically used in soft ground to rock geology for pipes 4 to 48-in. OD. The process consists of first installing a pilot tube on grade using a slant face head (similar to that of a directional drill) in combination with an LED target, a theodolite, and a computer controlled digital monitor mounted on the GBM jacking frame.

Once the pilot tubes are installed, a reaming pass or multiple reaming passes are used to enlarge the hole to its final diameter. The first reaming process uses temporary casings and augers to support the hole and transport spoil, while the pilot tubes are simultaneously extracted from the reception shaft. As the tooling string advances, the PCH increases the bore, the excavated spoil travels through the augers to the reception shaft, and the final product pipe is jacked behind it until the full length of the alignment is completed.

For the East Trunk project, Minger Construction used the new Gen V Monitor and GBM Smart Target from Akkerman. “With the new guidance equipment from Akkerman we completed a 680-lf guided boring run – that is pretty much unheard of for pushing guide rods,” said Luke Minger, president of Minger Construction. “In the past we wouldn’t recommend going over 400 ft for guided boring runs because at that distance it becomes more difficult to keep the laser target within the theodolite. With this, perhaps we’ll start to see 500 ft become the norm.”

The reason for the extended guided bore was because of site constraints. Lengthening the bore to avoid obstructions and acquiring easements offset the risk of performing a longer bore.

Pipe jacking uses a pump/power unit with hydraulic cylinders which push against a thrust yoke along a skid base to propel a TBM and pipe string, while the TBM’s rotating cutter head excavates. Excavated spoils travel along a conveyor system and are then deposited into a muck cart positioned on a haul unit which travels on tracks in the base of the tunnel. When the muck cart is full, the haul unit operator transports it back to the launch pit, it’s emptied and then returned to the TBM.

The push unit – or jacking frame – pushes in a stick of pipe, the jacks are then retracted and another pipe positioned, and then the process repeats. Typically, a laser guidance system is used to maintain the alignment. Pipe jacking works best in soils with good cohesion, but can be modified to work in cohesionless soils or rock. Pipe jacking runs are usually between 200 and 1,000 ft, but can be used for much longer drives using specialized equipment.

The 48-in. runs for the East Trunk Sewer were split between Minger (7 drives) and J&J Boring (4 drives), each using an Akkerman Tunnel Boring System. The depth averaged between 26 to 32 ft deep for this size tunnel.

The soils for the project were well suited for pipe jacking: stiff clays with good standup time. “The clays were very conducive for jacking,” said Minger. “The holes stayed open well, which resulted in very low jacking forces and allowed us to achieve high production rates, although we did encounter short sections with soft seams and wet conditions that were more challenging.”

Due to the length of some of the runs – the longest being 1,366 ft – microtunneling, a specialized form of pipe jacking, was considered as an alternative. “Microtunneling uses a slurry circuit to transport spoil back to the launch site, but the slurry separation plant would have a tough time dealing with the heavy clays we would be excavating.”

So, crews opted for the TBM and a muck cart and conveyor to transport spoil. The drive was initially designed as an open-cut, but Minger chose to use guided boring, which saved restoration costs and disturbance to the City of Mequon and its residents.

Minger Construction was issued NTP in May 2018, and were on schedule to complete the project in early summer – well ahead of the planned October end date. By using the combination of guided boring method and tunneling, Minger Construct was able to reduce disruption in a largely residential area of this affluent Milwaukee suburb.

One of the keys to success is teamwork, according to Minger. “Having an engineer and an owner that are willing to work with you is important to a good project,” he said. “If you run into unexpected conditions, all parties need to be open minded and work together to find a solution. In this case, we were able to come up with a solution without slowing the work down at all.”