You are at:Home»News»Extreme Grade Basement Utility Connections in Toronto 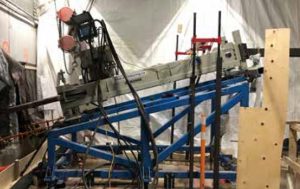 Since the early 2000s, Enwave Energy has installed over 3.5 miles of 10-12-ft. tunnels to provide sustainable, low carbon energy services to Downtown Toronto. One of Enwave’s current projects aims to extend the tunnels to connect the East Bayfront mixed-use waterfront community. The 11.5-acre property is home to a new 25-story, 763.000-sq ft tower named Sugar Wharf, where the bottom third of the building accommodates the Liquor Control Board of Ontario (LC80) corporate headquarters.

In late 2019, Earth Boring Co. Ltd. (EBCL) was approached by C&M McNally Tunnel Constructors about the feasibility of drilling four, 18-in. ID tunnels to connect heating and cooling services in the basement of the new building. EBCL’s resulting ingenuity to tackle the project Illustrates the range of versatility for the pilot tube guided boring equipment line.

Anton Tsyhanok, Project Engineer-in-Training for EBCL, described the features of the installations as “Four identical 18-in. diameter bores in the utility room of the building basement, spaced 3.6-ft apart, with entry points at approximately 3.6-ft off the floor and a steep incline of 25.58%.” The bores would be completed through partially fractured and highly saturated shale.

Tsyhanok explained. “Each bore was approximately 93-ft long with strict line and grade requirements to ensure that appropriate connections could be made at the Enwave utility tunnel at the receiving end.” The connecting tunnel was simultaneously in construction, which meant that a receiving shaft would not be available as is typical with a two-pass pilot tube installation.

Logistical challenges also compounded the complexity of the installations. The project location was at basement level 5, 70-ft below the ground surface, with the nearest access point being an underground parking garage in basement level 4.

Tsyhanok described the utility room as “Thirty-foot wide, and irregular in shape, with a concrete column 3 ft from the centerline of the east-most bore, a floor that sloped by 1%, and a four by four-foot sump pit in the middle of the room.”

Since the building was still under construction and shared by numerous contractors, the only available staging area for tools and equipment was outside the building, over 110-ft away.

EBCL proposed to C&M McNally Tunnel Constructors, the use of its Akkerman 240A Guided Boring Machine, powered by a P100E Electric Power Pack, and a custom open-face cutter head containing a lead auger to increase the diameter of the bore to 18-in.

To install the pilot tube bores in fractured shale, they selected an Akkerman rock drill adapter as the leading tool that mates to a TnHawk drill bit. The adapter houses the guidance system’s LED target.

The continuous use of a bentonite polymer to cool the drill bit and provide viscosity to suspend and carry the cuttings is a crucial factor. EBCL added an Akkerman 1525B/E Electric lubrication pump for this purpose.

E8CCs engineering team designed a specialized jacking frame stand to position the bore entry point to meet the design’s line and grade requirements. It had to be light and mobile enough to move around the utility room, and sturdy enough to sustain the applied jacking loads and rotational forces, with braces to connect and stabilize it to the basement wall.

The frame integrated lagging points around its base for the insertion of large anchor bolts for grounding. The quantity of anchor bolt locations was later increased, following the discovery of numerous utilities, including a 600V power line, just 4 in. into the concrete floor slab.

Tsyhanok explained, “The increased number of anchor points allowed our team to select anchor locations as needed to avoid utilities on each bore while ensuring that the frame remains adequately fixed.”

To connect the power and bentonite slurry mix to the pilot tube system with the power pack and lubrication pump from the staging area, extra lengths of hosing were necessary.

Each bore consisted of a pilot tube installation on line and grade, then the pilot tubes were pulled back. During the second pass, the cutting head increased the diameter of the bore to 18-in., followed by the steel casing with enclosed augers. Spoils and groundwater were pulled back to the sending side using a string of augers, where a hydro-vac truck removed it at the surface.

At the time of this article, Tsyhanok reported the accurate completion of three of the four bores. Their success possesses the potential for additional basement connections projects, in synch with Envreves utility expansions.

Tsyhanok concludes, “Despite the challenging conditions, the two-pass pilot tribe system proved to be quick and highly accurate. The machine allowed us to meet the strict alignment requirements and helped ensure that the future connections for the building could be completed with ease.”