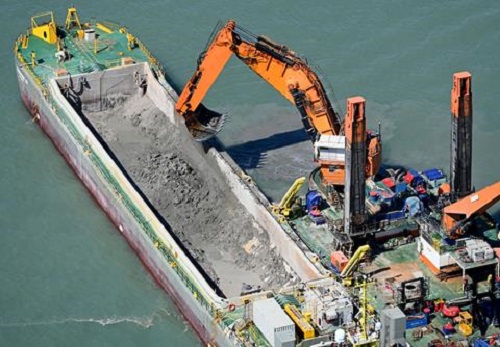 Yet another major milestone has been reached in the construction of the Fehmarnbelt tunnel. Half the total amount of soil has now been dredged from the seabed in preparation for the trench which will accommodate the 18 km immersed tunnel to Germany.

The Dutch consortium, FBC, who are responsible for dredging the tunnel trench, are using some of the world’s largest dredgers plus barges, tugs and other specialist vessels. Some 1,200 tunnel workers are now engaged in the construction of the immersed tunnel and the tunnel factory at Rødbyhavn.

“We’re proud to have achieved 50 per cent of the dredging operations. This has been possible thanks to the expertise and dedication of the FBC team and our partners as well as the deployment of a number of specialised vessels and machines on land. We would also like to thank Femern A/S for a great collaboration,” says Bart Pröpper, FBC Project Director.

According to the plan, up to 19 million cubic metres will be dredged from the seabed. Most of the material will be reused east and west of Rødbyhavn and on Fehmarn on the German side to create new nature and recreational areas.

“The construction project is of great importance to the business community and for employment opportunities on Lolland and in the region. It is also important in that it offers apprenticeships which will ensure we have the skills we need now and in the future. The completed tunnel will also make a significant contribution to the green transition of the transport sector and provide a fast European train link. It’s to everyone’s benefit that the construction of the Fehmarnbelt tunnel is on schedule and that an important milestone has now been accomplished,” says Trine Bramsen, Denmark’s Minister of Transport.

Dredging operations for the Fehmarnbelt tunnel got underway in July 2021 and are expected to be completed in 2024. This will be followed by the immersion of the first tunnel element.

Protecting the environment
The choice of dredging machinery not only relates to size but also ensures that the work can be carried out with due care for the surrounding marine environment.

FBC’s dredgers operate with great precision in the depths of the Fehmarnbelt. The work is also performed as carefully as possible and the amount of spill from the dredged material is so far below the level agreed with the Danish and German authorities.

“We are, of course, delighted that the work is progressing on schedule. Our focus is now on the project’s next goal. For us, it is important that the construction of the Fehmarnbelt tunnel is built as sustainably as possible. Wherever possible, we and our contractors, try to identify opportunities to optimize the project for environmental reasons and to contribute our know-how for future infrastructure projects,” says Henrik Vincentsen, CEO, Femern A/S.