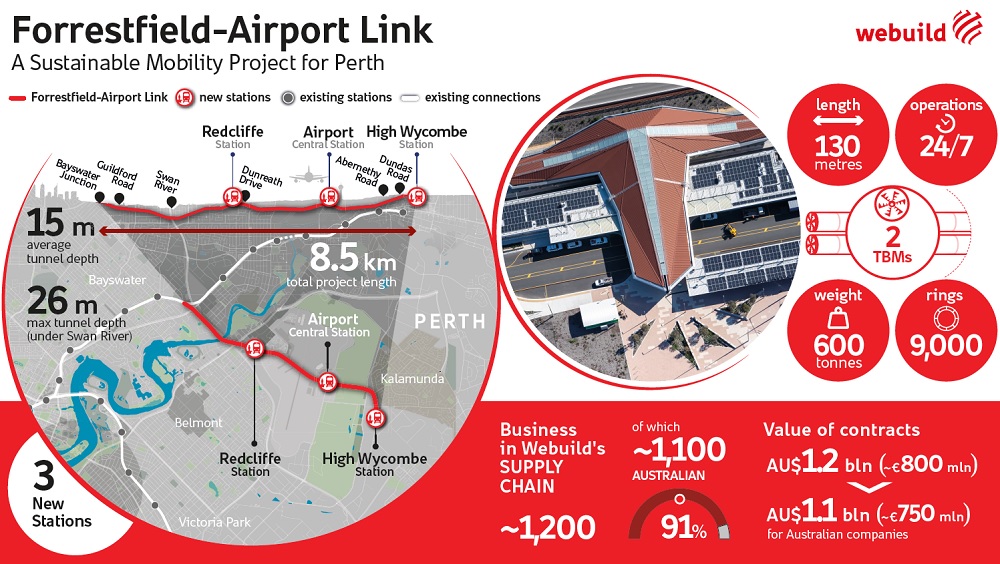 Australia’s Prime Minister along with Western Australia’s Premier and Transport Minister celebrated the opening of a new urban rail line that will connect the suburbs with the city center via the international airport. The Airport Line, formerly known as the Forrestfield-Airport Link and built by Webuild, is one of the biggest sustainable mobility projects in the region.

“This has been one of the biggest and most complex public transport infrastructure projects our State has ever undertaken, and I am incredibly proud to see the new line begin operations,” said Western Australian Transport Minister Rita Saffioti.

In Perth – Adelaide, the nearest city, being 2,153 kilometres away – transport services are essential to live and prosper. This was the idea behind the Forrestfield-Airport Link, the new urban line that reduces distances in the city, allowing commuters to travel between the suburbs and the centre in a mere 20 minutes compared with a previous 45 minutes by car.

The rail line, developed with an investment of AU$1.86-billion (€1.21 billion), is 8.5 km long and it connects the eastern suburbs with the Central Business District via the international airport. By potentially taking 15,000 vehicles off the roads every day, it will help reduce up to 2,000 tonnes of CO2 emissions a year.

Commissioned by the Public Transport Authority and jointly funded by the West Australian and Australian governments, the project entailed the construction of two parallel tunnels, three stations at Redcliffe, Airport Central (Perth Airport) and High Wycombe, 12 cross passages, and other related infrastructure for Webuild, which led the construction of the project with an 80% stake in the joint-venture together with its local partner NRW despite the difficulties caused by COVID for the entire supply chain of 1,200 companies of which 91% local.

The excavation of the tunnels by two tunnel-boring machines (TBMs) was very challenging due to the varying geology and because it was done under operating railway lines and beneath the airport’s operating runways before reaching the deepest point of the line at 26 m under the Swan River.

The sustainability features of the project mark an important step for the future of infrastructure. At High Wycombe Station, for example, Webuild oversaw the largest solar panel system to be installed for a state government department in Western Australia, sufficient to meet the average summertime daylight electricity demand of all three stations The stations celebrate aboriginal art by being decorated in contemporary style with abstract figures with the aim of emphasising the city’s welcoming spirit showing just how works can blend into the surrounding environment.

Webuild is expanding in Australia, a market of strategic interest for its projects in sustainable mobility and renewable energy. It belongs to a consortium identified in March as preferred bidder for the construction of a section of Inland Rail, an ambitious project to facilitate freight transport between Brisbane and Melbourne. In Melbourne, its preparing to build the North East Link, the biggest investment in the city’s north-east to fix a missing link in the freeway network under a public-private partnership. In the Snowy Mountains, it is working on Snowy 2.0, the largest hydropower project in the country. In Sydney, it was responsible for the award-winning curved, cable-stayed bridge for the Sydney Metro Northwest, the first of its kind in the country.