You are at:Home»News»International News»Fugro Expands Its Instrumentation to Monitor Dutch Tunnel 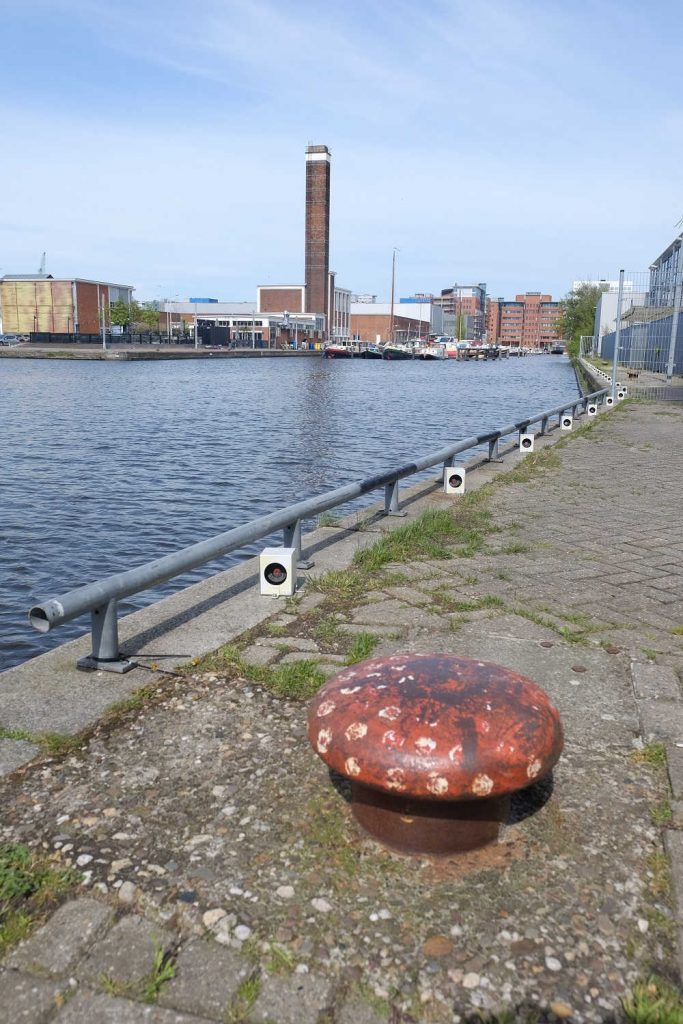 In the port areas above the tunnel route, arrays of monitoring prisms are measured by robotic total stations on an ongoing basis.

To address congestion in densely populated cities, transportation engineers and city planners are increasingly turning to tunnels. Take the Rotterdamsebaan tunnel beneath The Hague (Den Haag) in the Netherlands. This complex project exemplifies a new era in urban tunnel construction. It is efficiently built, environmentally friendly and designed to mitigate any impact on urban centers.

The Importance of Location

The Hague is the third largest city in the Netherlands. Within its boundaries are some of Europe’s densest populated metropolitan areas. It is home to federal agencies, royal residences, a busy harbor, and international bodies that include the International Court of Justice, the International Criminal Court and major United Nations facilities. With so many stakeholders, independent monitoring of the Rotterdamsebaan tunnel’s impact was imperative.

The Hague city council contracted Fugro to oversee the monitoring process. Fugro is an international leader in providing geospatial measurements and asset integrity data for large infrastructure construction, energy and natural resource management. Fugro would monitor the impact of the project on infrastructure along the tunneling corridor and would be responsible for surface deflection monitoring. In addition to Fugro, BAM Infra is collaborating on the project. BAM is a well-respected infrastructure and tunneling construction firm and is the main contractor for the Rotterdamsebaan project.

While modern TBMs are designed to minimize ground movements caused by the tunneling process, there will always be some ground reaction. The Rotterdamsebaan TBM, boring two parallel 11m diameter tunnels successively, operated at the relatively shallow depth of 20m to 30m below the surface. Despite this shallow traverse, the maximum allowed settlements, detectable at the surface, typically is only 12mm. That the tunnels are constructed to meet such tight tolerances is a testament to meticulous design, advanced TBM technology and skilled contractors. Such tight tolerances also put a premium on the instrumentation and skill of the monitoring teams.

Fugro applies best practices when monitoring such projects. These practices include utilizing multiple robotic total stations arranged in networks in and around features to be monitored. These total stations are remotely controlled by monitoring software in cycles taking pre-programmed measurements with millimeter precision. Long- and short-term trends are easily identified based on these measurements, producing real-time results as the TBM passes under each segment of the tunnel corridor.

For its monitoring work, Fugro uses high-precision total stations like the 0.5-second Trimble S9, which project manager and geodetic engineer for the project Richard Bun describes as an “A-class instrument.” On a project of this magnitude, 40 or more total stations may be in use at any given time.

Fugro developed its own monitoring software, GeoRiskPortal, which has been successfully used on a variety of projects worldwide. GeoRiskPortal connects to many types of monitoring instruments, including strain gauges and extensometers. Until this project, however, Fugro had previously connected GeoRiskPortal to just one brand of total station and wished to begin using Trimble total stations for automated monitoring as well. “Our goal was to connect with more than one brand of total station,” Bun said. “We have 50 surveyors in the Netherlands and they use two brands of instruments, including Trimble.”

Since Fugro incurs a significant development cost to integrate instruments with GeoRiskPortal, the company contacted several manufacturers to work with them on the project. With the measurement performance of the S9, the support of the Trimble engineers and the ability to efficiently integrate it into the GeoRiskPortal system, Trimble could provide a compelling solution.

In order to integrate the total stations with software such as GeoRiskPortal, an instrument needs to accept commands from the software and provide feedback and measurements (including metadata) without connectivity lapses or significant latency. To meet these requirements, Fugro used the Trimble Precision SDK (TPSDK), a software development kit that supports multiple Trimble instruments, including the S Series total stations. The SDK enables software control of the instruments, allowing developers to pair these high-precision tools with their own custom software and instrumentation. The Trimble Precision SDK enabled Fugro to efficiently integrate the Trimble total station with its GeoRiskPortal® software.

Developers can access the TPSDK and many other Trimble SDKs online. In addition, there is a community of developers using Trimble SDKs on the collaborative cloud portal/platform, GitHub.

Bun’s team set up four networks of monitoring instrumentation for the harbor, the tunnel exit area and two residential districts. The exit area at the end of the tunnel in the center of The Hague was of particular concern as the TBM comes to the surface. “We need to monitor the buildings immediately adjacent to the tunnel, certain additional buildings in the surrounding areas and the ground surface,” he noted. 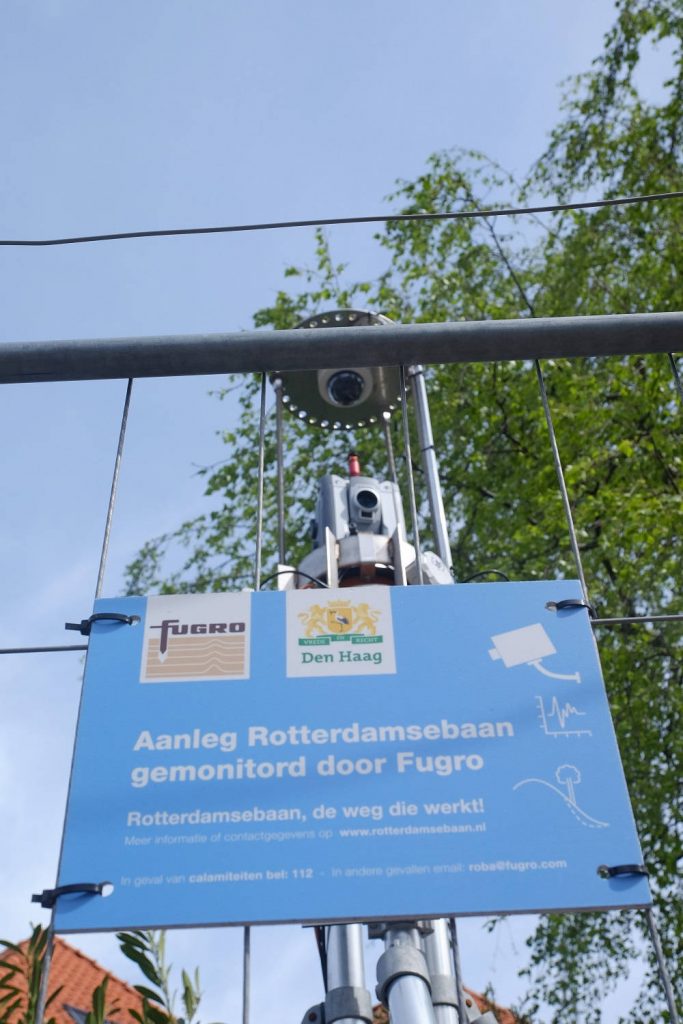 Monitoring robotic total stations were mounted on
solid posts in secure enclosures along the route. These self-contained monitoring units have
robotic total stations, communications radios/-modems, rain/snow hoods, and sometimes
cameras. They operate as a connected network of instruments and common inter-visible
monitoring/control points.

Bun explained that a control network of fixed reference marks is placed away from any movement caused by the tunneling. The total stations are situated throughout the corridor to have clear views of all building and surface features monitored for deflection. A concern in using total stations in developed or residential areas is noise. Typically each total station is mounted on a small platform bolted to the sides of buildings or poles, under bridges or positioned where they can capture a panoramic view from above the site. Sometimes the mounts are close to the windows of businesses or residences and the noise generated by the frequent rotations of the total stations may be irritating to the occupant. This isn’t a problem with the Trimble S9 though, as it utilizes a magnetic drive to provide silent operation.

To connect the total stations into the reference networks, Bun placed target prisms on buildings and chimneys that can be seen by at least two total stations. “We form networks that can be constantly measured and checked with the least squares adjustments,” he said.

With this self-monitoring reference network in place, the total stations can continuously take measurements while compensating for any movement. “For soft ground or fields we put an iron pipe in the ground that sticks up about one meter and has a prism on top. For hard surfaces like asphalt roads or concrete sidewalks, we can use the reflectorless mode of the total station. On buildings we do two tiers of prisms, the first at about 3 meters and the second at about 5 meters.”

Based on these measurements, the GeoRiskPortal software can model any vertical, horizontal or lateral movements of the surface or structures in real-time. When working in harmony, the robotic total stations are like “silent sentinels” keeping a watchful eye on any property and infrastructure above the tunneling, Bun said.

In January 2019, the TBM completed the parallel 1640-meter tunnels. Bun noted that there was an initial investment to modify Fugro’s software to accommodate the Trimble S9, but the benefit of being able to use a better selection of instruments, especially on a project of this size, far outweighed the costs. Fugro has already expanded its capabilities on other monitoring projects and looks forward to continuing this momentum moving forward.