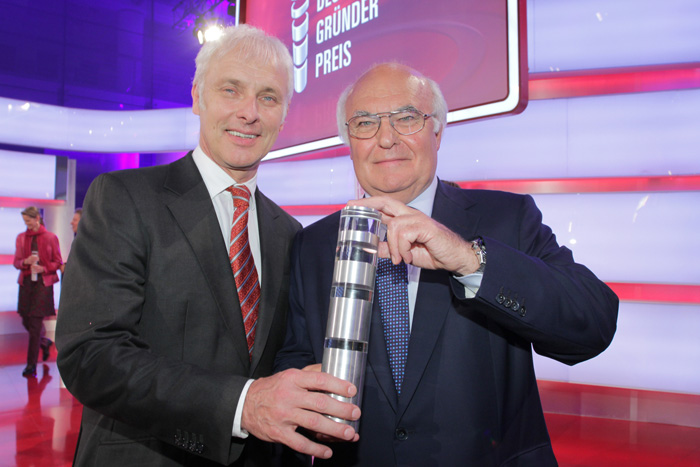 Martin Herrenknecht of Herrenknecht AG (right) was given the Deutscher Gründerpreis 2013 on June 25 for his lifetime achievement. He is shown with Matthias Müller, Chairman of the Board of Management of Porsche AG.

“Those who meet him are immediately aware of his extraordinary vitality, his energy, the pleasure he derives from what he does, coupled with a sense of responsibility and, of course, he is very down to earth.” Müller said. “Indeed, he possesses all the qualities needed by an entrepreneur who not only enjoys short-term business success, but also long-term achievements.” Mueller also praised the generous social commitment of the entrepreneur, which includes promoting business start-ups and a spirit of innovation.

Accepting the award, Herrenknecht said: “I am very excited about this award. It honors my mother who believed me from the beginning and equipped me with the necessary start-up capital. This award is just as much for my family, who has often been neglected by me and yet has still always stood by me. And finally, the award honors the loyalty and hard work of my staff, who have made the company Herrenknecht a champion on the world market.”

Martin Herrenknecht also thanked Prof. Dr. h.c. Lothar Späth who – as Chairman of Herrenknecht AG’s Supervisory Board for 14 years – made sure that the company was able to master the process of globalization successfully.

The Deutscher Gründerpreis is awarded each year in the categories Schools, StartUps, Climbers and Life’s Work. It recognizes entrepreneurial role models whose companies are at various stages.

Initially, Herrenknecht set out on his own with his engineering firm in 1975 and developed the first machine types MH 1 to 3 for mechanized pipe jacking. Two years later he founded Herrenknecht GmbH in nearby Schwanau, with a start-up capital of DM 25,000 which he borrowed from his mother. In 1998, Herrenknecht GmbH was converted into a stock corporation, and Herrenknecht has been the Chairman of the Board of Management since then. Herrenknecht AG has around 5,000 employees, trains more than 200 young people and generated a total operating performance of 1,135 million euros in 2012. The family business is a world leader in mechanized tunneling technology. Martin Herrenknecht has already received numerous awards and prizes, including an honorary doctorate from the Technical University of Braunschweig in 1998 and the Cross of Merit, 1st Class of the Federal Republic of Germany in 2007.