You are at:Home»News»Herrenknecht To Supply 15 Tunnel Boring Machines to Doha 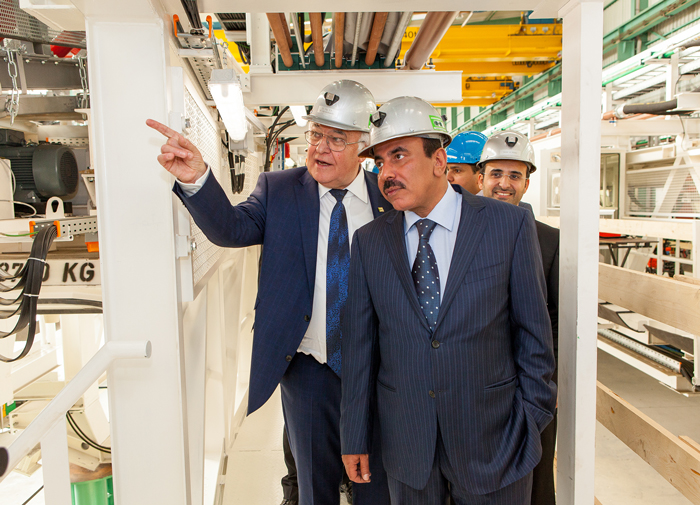 Dr.-Ing. E.h. Martin Herrenknecht, Chairman of the Board of Management Herrenknecht AG, and HE Jassim Saif Ahmed Al Sulaiti, Minister of Transport – State of Qatar, tour Earth Pressure Balance Shield S-860, one out of 15 tunnel boring machines Herrenknecht is producing for Doha Metro.

The State of Qatar is pursuing a large and ambitious vision destined to provide the highest standards of living to the country and its citizens by the year 2030. An important component for this is a modern transport infrastructure.  Consequently the capital Doha, chronically plagued by congestion, is to receive a completely new, very efficient metro system. German TBM manufacturer Herrenknecht has been tasked with delivering 15 high-tech tunnel boring machines for this purpose.

In February, HE Jassim Saif Ahmed Al Sulaiti, the Minister of Transport – State of Qatar, took a closer look at a first tunnel boring machine for this major project at the Herrenknecht plant in Schwanau, Germany, together with the former German Chancellor Dr. h.c. Gerhard Schröder. Joining Al Sulaiti were senior representatives of the client, Qatar Rail, and the joint venture QDVC/GS Engineering & Construction/Al Darwish Engineering as well as a representative of the Embassy of Qatar.

During his visit Al Sulaiti underscored the enormous importance of this project for Doha and the land of Qatar: “Qatar holds its hopes and aspirations for the future in accordance with the Qatar National Vision 2030. One of the most important elements in fulfilling this vision is the infrastructure of the country itself. As such, we have allocated tremendous resources and a generous budget for upgrading Qatar’s infrastructure, to which Qatar Rail’s Doha Metro project is also included.”

Engineer Abdulla Abdulaziz Turki Al Subaie, Managing Director of Qatar Railways Company (Qatar Rail), added: “Qatar Rail places full faith in Herrenknecht’s abilities to deliver exceptional quality products with attention to detail; that’s why this firm has been selected to supply us with the TBMs. The budget allocated to us will allow us to deliver a state-of-the-art rail system that will give confidence to citizens and residents alike that the network will be unquestionable when it comes to security, comfort, and reliability. Of course, the benefits of our projects go beyond the transportation sector, and a positive impact will be felt socio-economically and environmentally.”

Eng. Saad Ahmed Al Muhannadi, Chief Executive Officer of Qatar Railways Company (Qatar Rail), commented on the importance of the TBM’s technical aspects for the Doha Metro project: “Tunnel boring machines are important to the Doha Metro project as there is minimal interference in the day-to-day life of people working and living in Doha as a vast majority of work is done underground with only one point of entry. In addition, the environmental impact is also minimal, with almost no pollutants released into the air or into the groundwater.”

Dr.-Ing. E.h. Martin Herrenknecht, founder and Chairman of the Board of Management of Herrenknecht AG, thanked the Minister, the client representatives and the contractors for the great confidence in top German technology: “With our high-tech tunnel boring machines and absolute reliability we will contribute everything possible to ensuring Doha gets a metro tunnel system to the highest global standards.”

The Earth Pressure Balance shields Lehwaila and Al Wakra with a diameter of 7,050 mm and a cutting wheel drive of 1,280 kW were ordered by the joint venture QDVC/GS Engineering /Al Darwish. The joint venture is responsible for the construction of the metro section Red Line South. The Red Line will not only handle the bulk of the national transport and connect the most important stadiums of the football World Cup in 2022. As a central line it also connects the city center with the airport and the Westbay Central.

For the expansion of the first section of the Doha Metro, Herrenknecht is currently supplying a total of 15 EPBs. By the year 2019 they are to drive about 90 km of tunnel through the limestone below the Qatari capital for the Red Line South, the Red Line North and the Green Line.

Further plans envisage the completion of a second section by 2026. Then the Doha metro with four lines and around 100 stations will connect the residential and business centers of the capital with each other and with the suburbs.