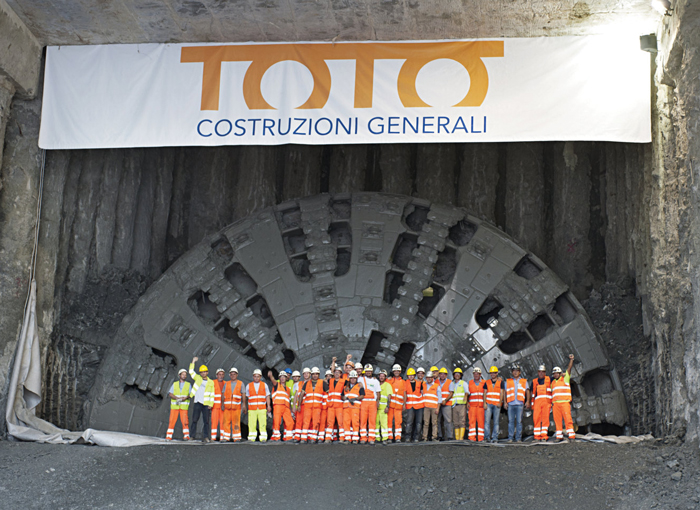 The Herrenknecht tunnel boring machine needed about two years to construct the Sparvo Tunnel with its two parallel tubes of about 2.4 km in length each. On July 29, 2013, the construction company TOTO Costruzioni Generali S.p.A. celebrated the final tunnel breakthrough with leading Italian politicians and numerous other guests. This meant that the Herrenknecht Earth Pressure Balance Shield “Martina”, with its shield diameter of 15.55 m, is the largest tunnel boring machine in the world to successfully complete a project.

Since the start of tunneling in August 2011, the entire world of tunnel construction has kept a close eye on the continuous project progress. In July 2012, contractor and client celebrated breakthrough of the first tube. Following a 180 degree turn of the TBM, including its back-up systems, “Martina” started the second drive at full steam at the beginning of December 2012. The tunneling team was able to even outperform the good tunneling performances of the first drive, completing the second tube in a construction time of only 8 months. The Herrenknecht machine showed top performances of 24 m a day and 126 m a week of driven and lined tunnel. 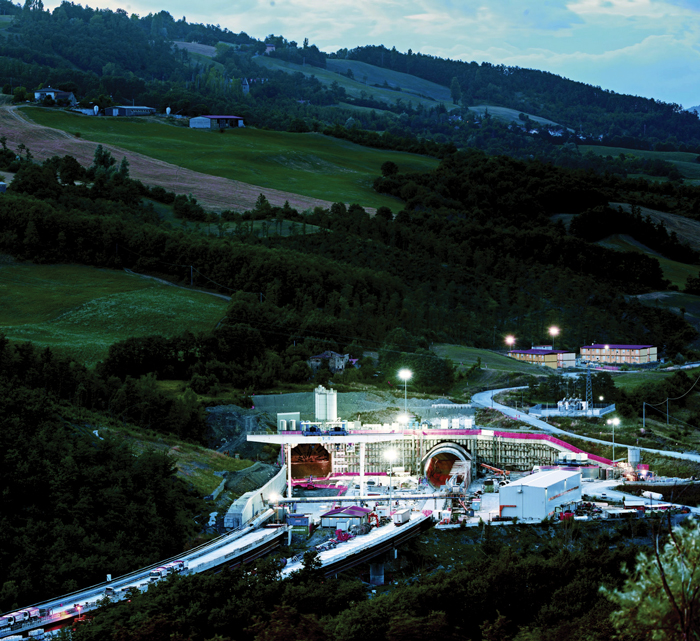 In view of the expected mine gases, designers had equipped the machine with explosion protection. Together with the client, local authorities and universities, a sophisticated safety system had been developed. The entire belt conveyor on the tunnel boring machine has a double-walled housing and is pressurized so that the excavated material containing methane can be removed from the tunnel safely. In addition, fresh air was permanently fed into all areas of the TBM using an efficient ventilation system. Both the tightness of this casing and the gas concentration were monitored continuously.

The ring segments with their width of 2 m and length of more than 4 m were transported with an explosion-protected 24-wheel special vehicle from the Herrenknecht subsidiary Techni-Métal Systèmes. With a triple superstructure and a width of 2.5 m, the multi-service vehicle is able to load a complete set of 10 segments. This provided the optimum supply of ring segments to the TBM with only one drive per segment ring.

The approximately 2.4-km long twin-bore Sparvo tunnel will accommodate two lanes each, including a third emergency lane. As part of the “Variante di Valico” extension project, a busy section of the A1 highway between Bologna and Florence is being extended. This alternative will significantly reduce the travel time for up to 90,000 vehicles a day.