You are at:Home»News»International News»Herrenknecht TBM Reaches Milestone on Brenner Base Tunnel 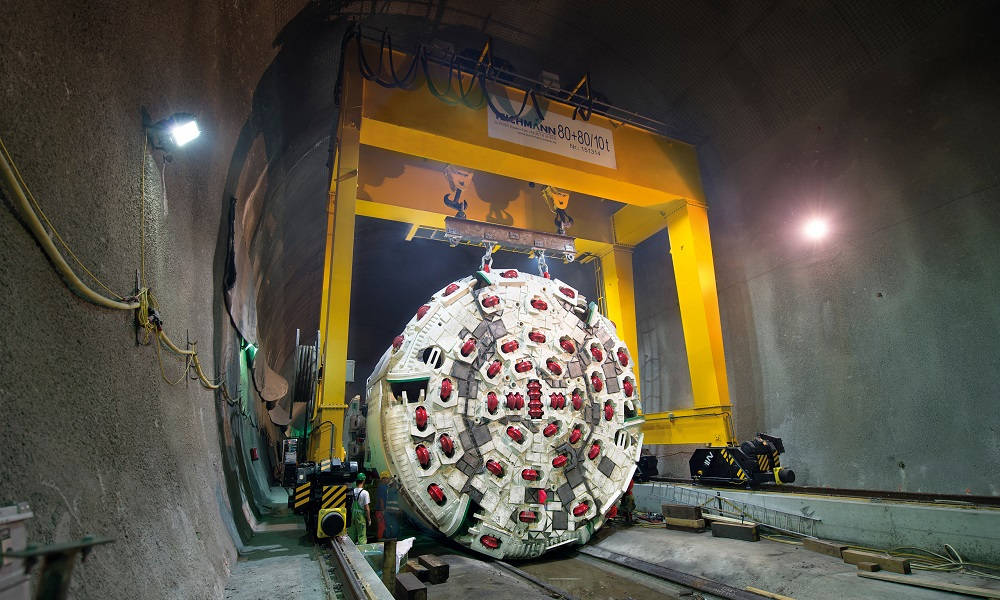 A groundbreaking signal for what is currently the largest European railway infrastructure project and an emotional high point for the hard-working tunnel builders, engineers and project managers on this day: “We reached our target with pinpoint accuracy,” says Anton Ertl, overall site manager of the construction phase.

The ARGE Tulfes-Pfons (ATP) construction consortium, consisting of Austria’s STRABAG AG and Italian contractor Webuild (formerly Salini-Impregilo), and the gripper TBM manufactured in Schwanau, Germany, thus completed an unusual hard rock mission. They are pioneers in the production of a superlative railway infrastructure. From October 2015, the tunnel boring specialists steadfastly drove hard rock machine “Günther” (Ø 7,910mm) 16.7 kilometers from north to south under up to 1,300 meters of alpine rock toward their target. The TBM’s name is borrowed from Tyrolean governor Günther Platter. The machine is one of a total of six tunnel boring machines that international construction joint ventures have so far ordered from Herrenknecht.

Pat Cox, member of the European Commission and TEN-T coordinator for the SCAN-MED Corridor, congratulated the site crews and the many other project partners on their outstanding performance: “I congratulate you on the breakthrough of the tunnel boring machine, another important step and milestone for the Brenner Base Tunnel. After its completion, the BBT will not only link Austria with Italy, but will be the centerpiece of the Scandinavian-Mediterranean Corridor, which extends from Finland to Malta.”

Under the direction of the Austrian-Italian BBT SE, with the Brenner Base Tunnel and a total length of twice 64 kilometers, the longest underground rail link in the world is being created. It crosses beneath the Alps between Innsbruck in Austria and Fortezza in Italy as a particularly efficient flat rail route, that is, without any notable, energy-consuming gradients.

Leonore Gewessler, Austrian Federal Minister of Climate Action, Environment, Energy, Mobility, Innovation and Technology, explained the ecological benefits of the project: “Currently, 72 percent of goods are transported by truck. This results in 2.5 million truck journeys a year over the Brenner Pass. So the Brenner Base Tunnel means a shift from truck to rail. This is not just good news for the climate, i.e. significant CO2 reductions, but also for the people of Tyrol, and with the Brenner Base Tunnel we will be able to increase the number of freight trains from 66 to 225 per day.”

Dr.-Ing. E.h. Martin Herrenknecht, founder and Chairman of the Board of Management of Herrenknecht AG, is certain: “61 meters and 4 centimeters in just 24 hours with a modern Gripper TBM – in May 2020 the tunnelers at the Brenner Base Tunnel were able to set a new record in hard rock tunneling. We very much appreciate the trust our customers and the client place in our Herrenknecht technology. We are proud to be part of the next record-setting structure in the Alps after the Gotthard Base Tunnel.”

Herrenknecht sextet
For the Italian lot of the exploratory tunnel (south axis), Herrenknecht supplied a Double Shield TBM (diameter 6,800 mm) specialized in rapid tunneling in stable rock. By July 2020, it had already bored 9 of a total of 14 kilometers from south to north. The customer here is BTC S.c.a.r.l. consisting of the companies Astaldi S.p.A., Ghella S.p.A., P.A.C. S.p.A. and Cogeis S.p.A.

Since May 2019, the Italian sections of the main tubes have been bored by two Herrenknecht Double Shield TBMs (diameter 10,650 mm), also under the direction of BTC S.c.a.r.l. These two machines had already covered 4.3 and 4.7 kilometers respectively by July 2020. Two Herrenknecht Single Shield TBMs (diameter 10,340 mm) are planned for the main tubes on the Austrian side. Here the ARGE H51 Pfons-Brenner joint venture (PORR Bau GmbH – Tunnelbau, G. HINTEREGGER & SÖHNE Baugesellschaft m.b.H., ITINERA S.p.A., Società Italiana per Condotte d´Acqua S.p.A.) is responsible for the tunneling. Tenders for additional mechanized machine drives are currently in preparation.

Group deliveries
The Herrenknecht Group has also supplied the large-scale Brenner Base Tunnel project with a belt conveyor system for the transport of excavated rock. Bochum-based H+E GmbH designed and manufactured a system consisting of 37 belt conveyors and four spreaders with a total length of over 60 kilometers. The entire system is controlled from a central control panel. Additionally, Euroform S.r.l. is supplying formwork for the lining of machine-driven or conventionally advanced tunnels. For the Mauls lot, the SDS production and logistics management system for segment production comes from VMT GmbH. VMT supplied the TUnIS navigation systems for all six tunnel boring machines ordered to date – for the Gripper TBM also the newly developed TUnIS.mobile app for operating the navigation system from outside the control cabin.