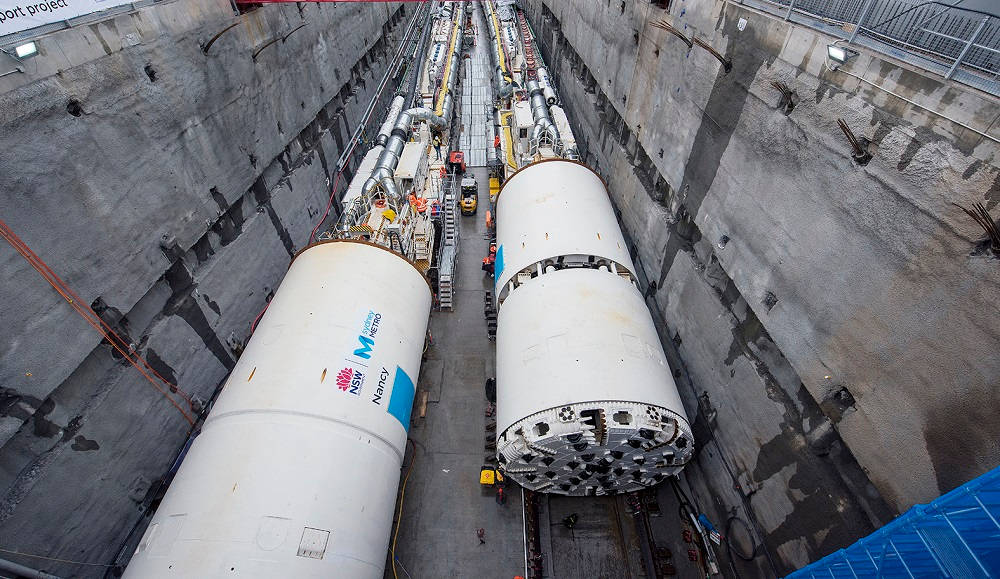 Sydney Metro is the biggest public transport project in Australia, and it is currently being extended to cover the City and Southwest districts of Sydney.

The current work program involves the construction of 15.5 km twin tunnel using five Tunnel Boring Machines (TBMs) working concurrently across the tunnel route. Four TBMs are Herrenknecht double shield machines and one single shield machine. Other sections of the tunneling works, mainly for the station cavern construction, involve the use of 13 roadheader machines along with seven rockbolter rigs. The tunneling works are being carried out by John Holland CPB Ghella Joint Venture.

At the end of April 2020, the final TBM drive was completed holing out at Blues Point after it had tunneled 885 m from Barangaroo, up to 40 m deep under Sydney Harbor.

Supporting the project, VMT has provided equipment and site support for the TBMs, roadheaders and rockbolters with a variety of navigation systems for each of the tunneling systems types as well as its Segment Documentation System (SDS). The navigation systems were also supported by VMT’s TUnIS Navigation Office software.

The navigation systems include:

As well as this more traditional equipment, VMT has also introduced for the first time its TUnIS.mono cam. TUnIS.mono cam was specially designed for the navigation of Double Shield TBMs and is used to determine the position and situation of the front shield in relation to the gripper shield in 3 dimensions by using a camera located in the gripper shield and special targets on the front shield.

On double shield machines, the position and situation particularly of the front shield must be known. From a structural perspective, this is usually very complicated to determine using a conventional laser system. A complex system is used for the relative position and situation determination of the front shield compared to the gripper shield involving multiple components including a laser, laser target, inclinometer and a cylinder stroke measurement system, all of which requires a lot of room and complicated cabling and sensors.

With TUnIS.mono cam, VMT has now created a solution that needs only a single active component and is correspondingly simple to install, saving space and providing a system is unlikely to be problematic.

TUnIS.mono cam works photogrammetrically: to do so, an appropriate camera is installed in the gripper shield. Special markers are applied and surveyed in on the front shield. During operation, the system recognises the markers in the camera image and uses them to calculate the 3-dimensional position of the front shield in relation to the known position of the gripper shield. The most modern image measuring software is used for this along with sophisticated calculation algorithms.

The benefits of the new TUnIS.mono cam include:

Given this was the first use of the new TUnIS.mono cam, the customer was very happy with the effectiveness of the new system.