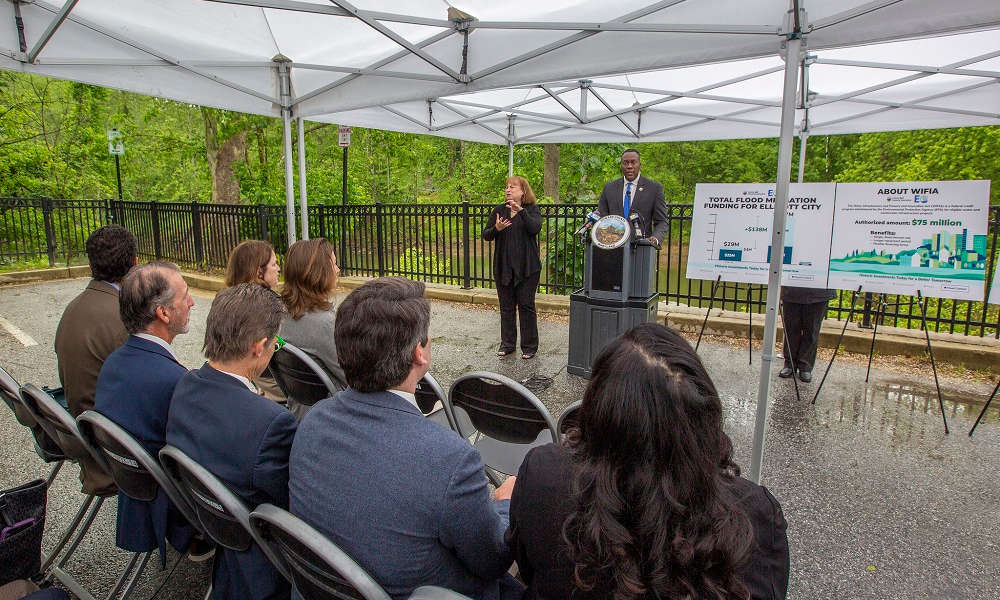 The EPA funding brings the total investment of county, state, and federal dollars in Ellicott City to $167 million in the past four years, which is $138 million higher than during the previous four year period.

“This tunnel will be one of the most important and impactful public works projects in the history of Howard County. This game-changing project will carry 26,000 gallons of stormwater per second, away from streets and foundations in Old Ellicott City and the West End and directly into the Patapsco River – about the amount of water in an in-ground pool every second. We are writing a new chapter in the long history of Ellicott City, making it a national model of resilience,” said Calvin Ball, Howard County Executive.

County public works officials said they expect to complete design of the tunnel this year, with construction starting as soon as possible. The project, known as the Extended North Tunnel, will be about 18 feet in diameter and run up to 100-feet underground, just north of Main Street. Howard County has already broken ground on two other major flood mitigation projects – the H7 and Quaker Mill ponds. Both projects are expected to be completed in the next year and will retain nearly 7.5 million gallons of storm water combined – about the size of a football field covered by 23 feet of water.

Executive Ball took office just months after the three recent deadly floods, in 2011, 2016 and 2018. The tunnel project had been rejected by the previous county administration for its complexity and cost, but Ball said he tasked his team with developing a comprehensive solution for Ellicott City flood control and looking for creative funding options. Ball praised federal, state and local officials for working together on a solution.

Components of the Ellicott City Safe and Sound Plan, which can be found at ecsafeandsound.org also include:

“This community has seen the challenges of climate change, and issues like flooding are happening across the country. The WIFIA program, which is one of the most effective financing programs we have at the EPA, will continue the excellent work that is happening here in Ellicott City,” said EPA Assistant Administrative for Water Radhika Fox. Fox said the terms of the loan would allow Howard County to save $13 million in interest costs compared with other financing options, and the tunnel construction would “create about 900 jobs right here in the county.”

“This is a triumph of collaboration between local, state, and federal government for a historic investment in historic Ellicott City,” said U.S. Rep. John Sarbanes. “WIFIA began as a pilot back in 2014 and was then converted into a permanent resource that could help local districts, like Howard County, take advantage of innovative financing. This is the kind of project that is happening all over the country, sadly due to climate change, but the resiliency that’s demonstrated here is a template for other communities. The fact that the community, residents and shop owners, had the resiliency to continue is a testament to the spirit of the people here in Ellicott City.”

Howard County received more than $15 million in State funding this year, through the efforts of Sen. Katie Fry Hester, Del. Courtney Watson, Sen. Guy Guzzone and the entire Howard County Delegation. In total, the delegation has secured nearly $42 million for the Ellicott City Safe and Sound plan and other flood mitigation projects since 2019.

“This is not your average infrastructure project, it is part of a comprehensive solution to save a historic mill town from the impacts of severe flooding caused by climate change,” said Sen. Fry Hester. “Delegate Watson and I have brought home approximately $40 million to implement the Safe and Sound plan over the last four years – that includes #12 million for the North Tunnel, $2 million for the T1 pond, and $1 million for the Maryland Avenue Culverts just this year.”

“On behalf of the partnership, the small business owners, property owners, and the residents we represent, we are ready to move the wheel of progress forward,” said Ellicott City Partnership Executive Director Jillian Joseph. “These funds really represent real progress, we’re grateful to everyone involved in securing a vibrant future for Ellicott City.”

“Being a part of this community is a labor of love, I go to work every day alongside many beautiful people that represent this town, that have thriving businesses in this community,” said Angie Tersiguel, owner of Tersiguel’s French Country Restaurant. “It’s a rare opportunity to see so many people consistently going to bat for Ellicott City, so thank you. Your partnership is taking us into the future, and that’s exactly where Ellicott City needs to go.”