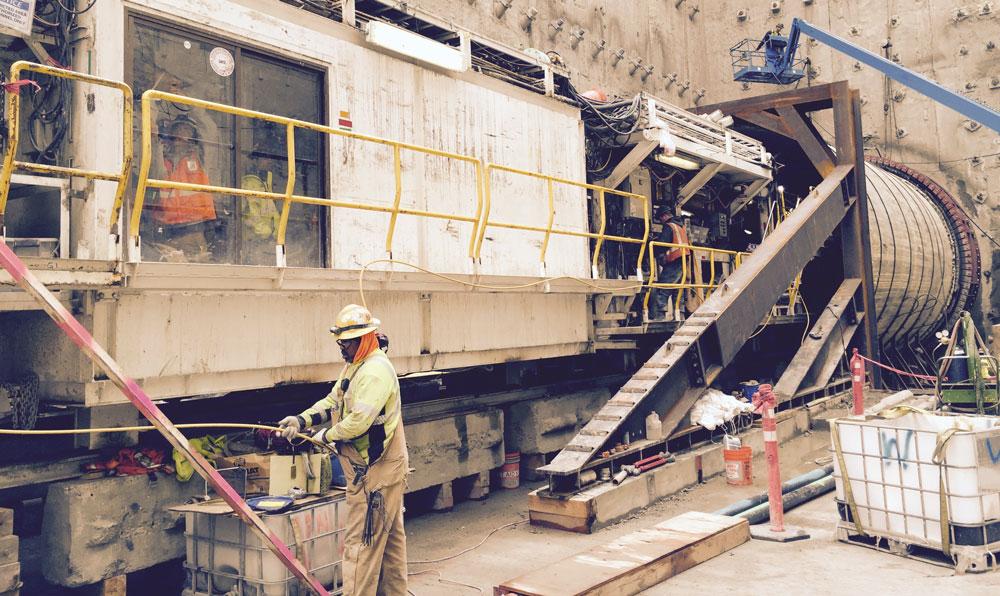 In our August issue each year we profile the Tunnel Achievement Award winner – a project that exemplifies excellence in tunnel construction. These projects are built within budget and on schedule, overcome unique challenges or embrace innovation – or any combination. This year’s winner is the Northgate Link Extension for Sound Transit in Seattle.

The Northgate Link project involves the construction of 4.3 miles of twin-track railway from a new elevated station near 1st Avenue NW and NE 103rd Street to the existing University of Washington Station. The Northgate Link project includes 3.6 miles of twin-track tunnels and two new underground stations, all built within a densely populated area as well as under the university itself.

The notoriously difficult ground in the region came in to the play, as usual, as did restrictions on tunneling under campus and its world-class research facilities. The joint venture of Jay Dee/Coluccio/Michels was awarded the design-bid-build contract for $440 million in 2013, and recently finished construction. Northgate Link is scheduled for revenue service in 2023.

Interestingly as Northgate Link was under construction in 2016, Seattle voters approved ST3, a ballot measure that provides $54 billion to expand and improve the region’s transportation, including an additional 62 miles of light rail. Plans going forward include the Ballard Link Extension that may include a new 3-mile long tunnel under downtown Seattle, parallel to the existing downtown tunnel.

This surge in demand for sustainable, reliable and efficient transportation options are being seen across the country and across the globe. In North America, Toronto and Los Angeles are in the midst of huge investments in new rail infrastructure, as are areas like New York, San Francisco/San Jose, Vancouver, Montreal, Calgary.

According to the statistics from the International Tunnelling Association (ITA), the demand for tunnels in general is staggering. Global output for tunnels in 2016 was €86 billion euros (approximately $100 billion USD), with an average 5,200 km (3,200 miles) of constructed tunnels per year. The yearly average growth rate in tunneling is 7%, double that of the global construction market at large.

What’s more, interesting is building in non-traditional transportation systems that could drive demand even higher. Studies are underway for a 60-km maglev train between Washington, D.C., and Baltimore with more than 75 percent of the alignment underground, and Chicago has awarded a contract to The Boring Company for the construction of an 18-mile high-speed link between downtown Chicago and O’Hare airport.

Similarly, interest is building in hyperloop systems elsewhere in the United States, as well as in Europe and the Middle East. Speaking at the 1st annual HARP International Conference on Hyperloop Transportation and Related Technologies July 23-24 in Los Angeles, Brad Swartzwelter of Amtrak said the ultimate key to the success of hyperloop systems is tunneling.

Tunnels allow the hyperloops to be straight – both in terms of line and grade – and provide greater protection from competing transportation systems/utilities, the elements and terrorism. From a financial standpoint, tunnels may have a higher initial cost, but the total construction and land cost would be cheaper than the surface option in the long run. “As the hyperloop systems start to get built, we could see the greatest expansion of tunnel construction ever seen,” he said.

While there are still issues to be resolved – technically, legally, politically, financially – high speed, safe and efficient transportation systems are certainly appealing. The appeal becomes even greater when the systems are underground, leaving surface space untouched.