You are at:Home»Featured Stories»Instrumentation & Monitoring for the E330 Downtown Bellevue Tunnel 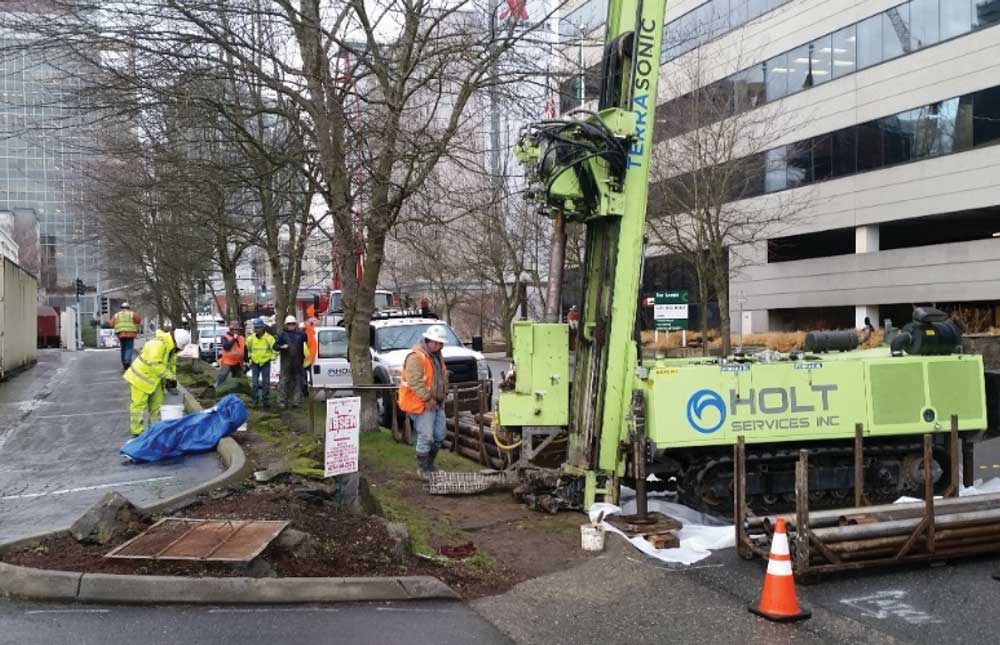 Drilling angled borehole for inclinometer. All boreholes were started by vacuum excavation to ensure that no unmarked utilities were present.

The E330 Downtown Bellevue Tunnel project is owned by Sound Transit, the regional authority for mass transit in the Seattle metropolitan area. The tunnel is part of Sound Transit’s East Link Light Rail Extension, slated to be in service in 2023.

The 2,000-ft tunnel would be mined through over-consolidated, Pre-Vashon glacial till that was above the water table. Much of the tunnel would pass directly under 110th Ave NW, a tree-lined, north-south thoroughfare with multi-story residential and commercial structures on either side. The width and height of the tunnel (36 x 32 ft) would put these structures, utilities, and the avenue itself within the zone of influence, so a robust instrumentation program was prescribed by the designers. Geo-Instruments was selected by the GC to supply, monitor and maintain the instruments.

The original design for the SEM tunnel specified a 6-heading method of excavation. The GC proposed excavating in 3 full-width headings for the south half of the tunnel, where soils were known to be competent. Sound Transit accepted the proposal but required additional instrumentation for monitoring the primary tunnel liner and ground settlement. 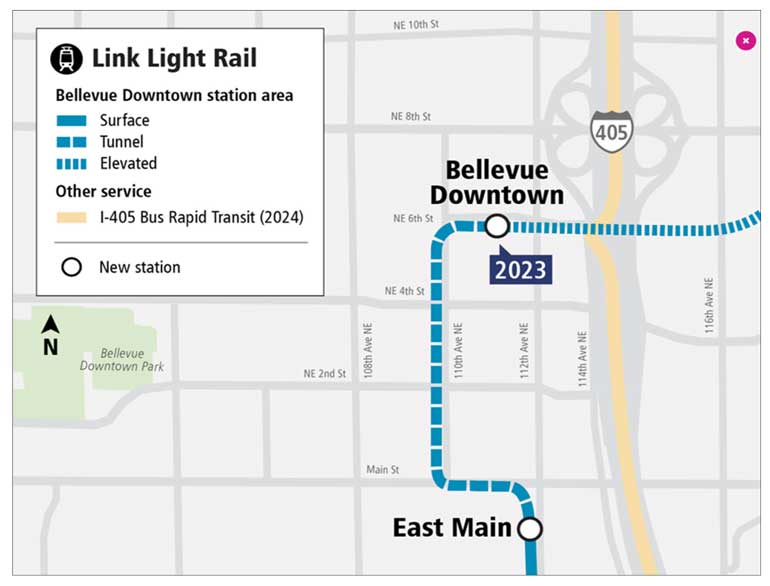 Figure 1: Sound Transit project map. The 2000 feet of tunneling started at the East Main location and ended at the Bellevue Downtown location.

The instrumentation program included monitoring of possible deformation of the soil-nail walls at the south portal, water levels along the tunnel alignment, lateral deformation on either side of the tunnel, settlement of the road surface and underground utilities, deformation of an abutting wall of a multi-level, below-ground parking garage, and loads on the lattice girders in the tunnel liner. An instrumentation data management system was to display measurements graphically, send alerts of exceedances, and generate daily reports.

Implementation of the Program

Piezometers were installed along the tunnel alignment collocated with observation wells and inclinometers at 10 locations. All were automated with dataloggers and wireless communications. Groundwater levels did not fluctuate much in the dense till, but some instruments detected draining of perched water by probe drilling ahead of the excavation.

Inclinometers were installed on each side of the tunnel alignment at 22 locations. Boreholes were drilled vertically to a depth 10 ft below the tunnel invert and passed 3 ft from the tunnel springline. Design depths varied between 63 and 106 ft.

In two locations permission to drill from private property was not forthcoming and drilling vertically from the City’s right of way would have placed the inclinometers inside the tunnel envelope. This issue was resolved by drilling from the right-of-way at angles of about 4 degrees. Subsequent inclinometer surveys confirmed that both inclinometers were within 1 in. of their intended placement.

Inclinometers were the only instruments that were monitored manually. The maximum reading rate was only once per day, which did not justify automated readings.

Inclinometer surveys showed lateral displacements starting just before or right after the tunnel heading reached the instrument. In two instances, displacements exceeded the 0.2-in. alarm threshold, but never the 0.3-in. limit.

The extensometers had to be installed in the roadway. To avoid obstructing traffic, they had to be completely below grade. The instruments also had to be automated, which would normally involve trenching for power and signal cables and installation of curbside dataloggers.

No significant settlements were detected by the extensometers, although one extensometer reported about 0.2 in. of movement at its bottom anchor, which was installed in a less stable sand lens.

AMTS were installed at 12 locations to monitor 350 prisms on the roads and structures along the tunnel alignment. Road prisms, serving as surface settlement points, were installed at 50-ft intervals in arrays of 5 that crossed the road. L-Bar Mini-prisms were installed on structural elements and corners of buildings to detect any movements of the buildings. 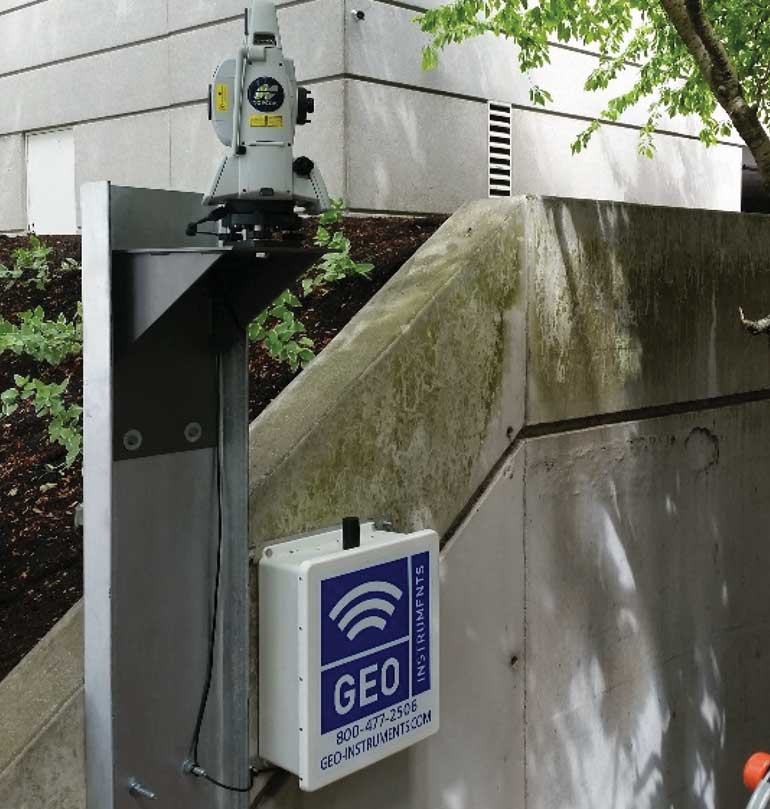 AMTS require unobstructed views of prisms in order to make measurements. This presented a challenge for the south half of the alignment, where trees and foliage blocked lines of sight from preferred mounting locations. After considering many configurations, the team installed the AMTS units on relatively low steel pedestals, positioning them with deliberate precision to maintain lines of sight to all monitored prisms.

The north half of the alignment had fewer obstructed lines of sight, so positioning the AMTS units was much easier. In fact, the City allowed Geo-Instruments to mount AMTS units on concrete light poles. The poles had built-in threaded sockets that were used to mount the AMTS brackets and dataloggers, and as a bonus, they were also equipped with 120v AC outlets that the City energized for Geo-Instruments to use. From an instrumentation engineer’s perspective, life just does not get any better than this.

Measurements of prisms mounted on buildings showed no significant movements. 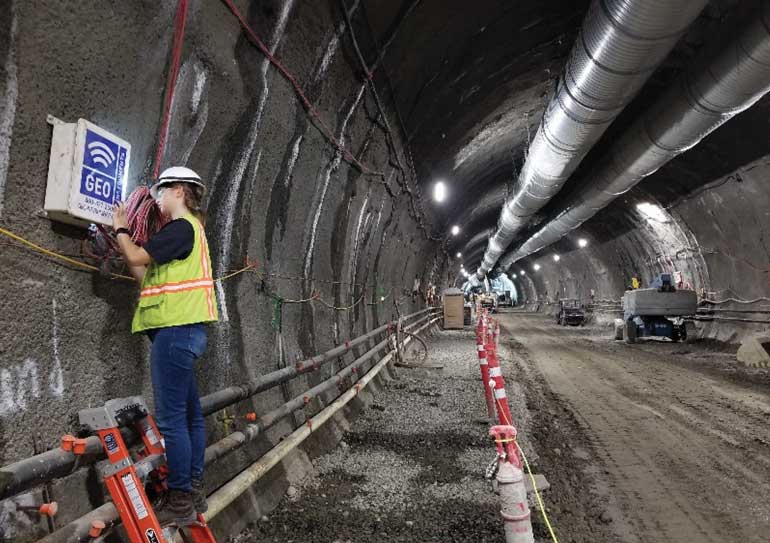 Separate dataloggers were dedicated to each instrumented lattice girder ring. Strain readings were transmitted to a base station at the tunnel portal by radio.

The Skyline Building is a 23-story office tower with a multi-level, basement parking garage that was built out to the property line. Because the tunnel excavation would eventually pass within 3 ft, the east wall of the garage was reinforced on three levels with a rebar mat, 6 in. of concrete and additional stiffening on two levels with steel struts across a ventilation shaft.

Instrumentation included strain gauges on the rebar mats, in the concrete, and on the reinforcing struts. Other instruments were installed on the same gridlines. These included displacement gauges, laser extensometers to monitor wall-to-stable core distances, and vertical arrays of tiltmeters to monitor lateral deformation. All of the instruments were connected to dataloggers, and measurement signals were transmitted wirelessly through the ventilation shaft.

No movement or deformation was detected by the sensors in the parking garage. Total strains in the reinforcement of the east wall were insignificant fractions of the warning threshold values. Measurements from other sensors generally tracked changes in temperature.

The steel lattice girder supports of the SEM tunnel were spaced at 4-ft intervals and installed in sections as the mining sequence allowed. The sections were joined to form complete rings. Rings were instrumented every 50 ft of tunnel, with the exact interval varying slightly to align with the instrument arrays installed at the surface.

Gauges were arc-welded onto the bars of the girder, tested, and then wrapped with thick aluminum flashing for protection from high-velocity shotcrete. Cables were protected by conduit and tied to the protected side of the bars. A datalogger installed at each monitored ring obtained measurements and transmitted them via a short-haul radio to a base station installed at the south portal.

Strain data revealed gradual increases in compression as ring thrust developed in the primary lining and confirmed the lattice girders performed as designed with no point loading conditions detected. A few transient changes in strain were attributed to accidental impacts from construction machinery.

Separate dataloggers were dedicated to each instrumented lattice girder ring. Strain readings were transmitted to a base station at the tunnel portal by radio.

Baseline readings were recorded shortly after an instrument was installed. Afterwards, weekly readings were increased to daily with the approach of the tunnel heading and then decreased to weekly and monthly as the heading passed. The reading rate for the tunnel strain gauges was specified at 6-hour intervals.

Taking advantage of automation, Geo-Instruments chose to read all of the instruments, except inclinometers, at shorter intervals. This provided higher resolution for trend plots and earlier notification of any alarm conditions.

The project website displayed sensor locations, values, and alarm status on 125 plan views and section views. It also provided over 300 plots for data. Six separate reports were automatically generated and sent via email every day, each containing all the pertinent plots for a given coverage area of the project. There were nearly 50 users accessing the project website and reports daily.

The instrumentation and monitoring program for the E330 contract served its intended purpose. It helped mitigate risk by enhancing safety at the site for both tunnel workers and the public, and it provided data that validated both the original design by H-J-H and the 3-heading redesign proposed by the GC.

Automated monitoring and wireless data transmissions were key to the success of the program. These factors minimized interruptions of construction work, avoided obstructing daily traffic, and provided cost-effective and timely high-quality data that could not be duplicated with manual monitoring.

Larry Leone is a Senior Project Manager with Geo-Instruments, Inc. in their Seattle office. He served as the instrumentation team leader for the East Link Bellevue tunnel project.