You are at:Home»News»Jacking Pipe and Pipe String: Key Factors to a Successful Curved Microtunnel

The desired result of a microtunneling job is a pipeline installed accurately and flawlessly. Ideally, the jacked pipe serves as a carrier pipe as well, avoiding expensive sliplining of an additional pipe. The best benefit of a microtunnel operation to the owner is the longest possible pipeline per shaft – once the system is running, the cost per linear foot drops with every additional foot jacked. Curved alignments allow extended drive lengths by avoiding obstacles and intermediate shafts. However, some key aspects regarding jacking pipe and pipe string have to be kept in mind to ensure the flawless quality of the installed pipe.

Effect of Curves on Joint Articulation of Rigid Jacking Pipes

Today, tight curves in microtunneling are in most cases only possible with rigid, thick walled jacking pipes with articulating joints, like reinforced concrete or polymer concrete. On a curved alignment, due to the rigidity of the material, the deflection is concentrated in the pipe joints. 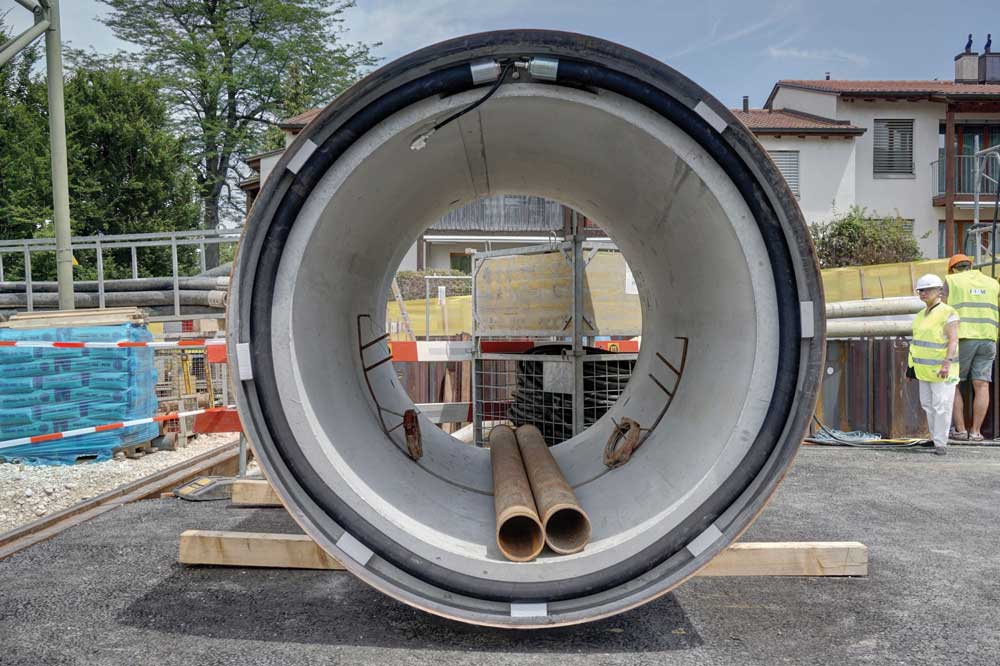 A high admissible jacking force is essential for an efficient operation and especially when things don’t go exactly as planned, some reserves are desirable and should be part of the risk management. Even with the best geotechnical investigation, any form of tunneling always involves surprises.

Safely transferring the jacking force from pipe to pipe in an articulated joint consequently is a key aspect and necessary to understand the admissible jacking force without causing damage to the pipes.

With conventional wooden pressure transfer rings, joint gaping on the outside of the articulated joint and point loading and unpredictable stress peaks on the inside are the unavoidable consequences due to the hardly predictable material behavior (Figure 2). 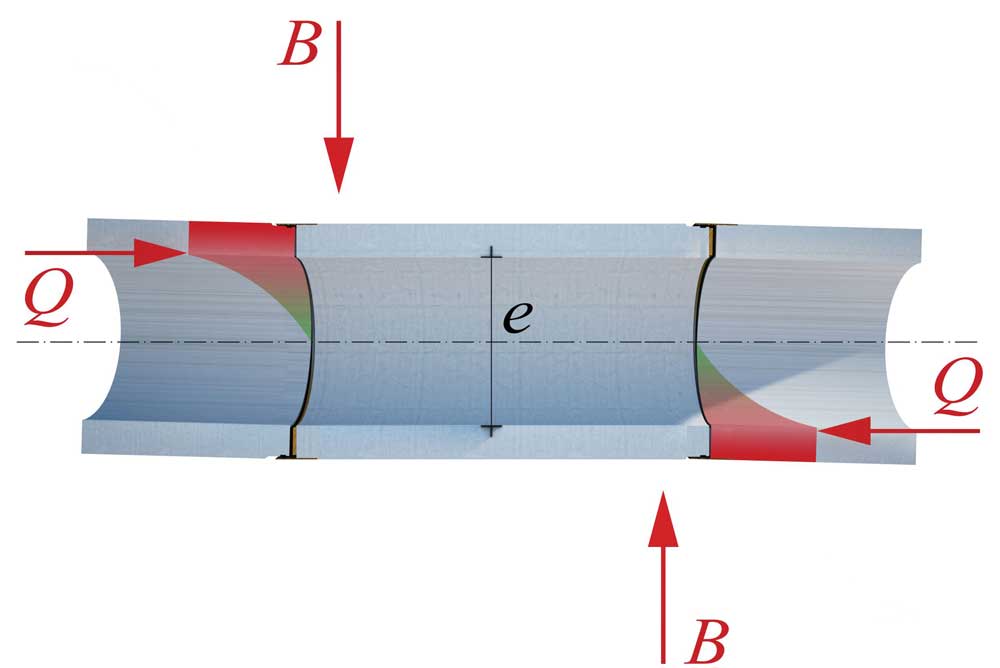 Engineered pressure transfer rings such as the Hydraulic Joint (Figure 1) or the EDAR can provide full face pressure transfer without stress peaks even when large articulation angles are experienced and allow an exact understanding of the stresses acting on the pipe due to their inherent, perfectly predictable mechanical behavior (Figure 3). 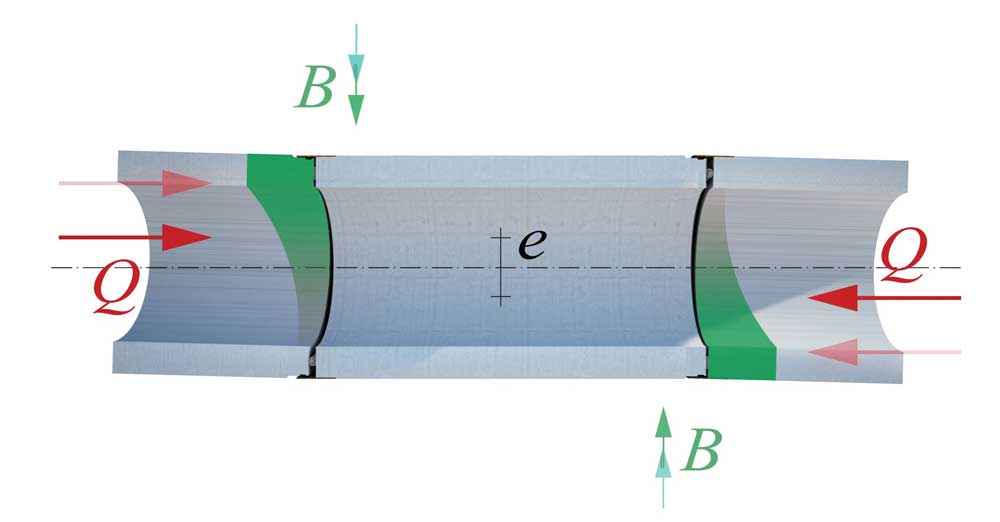 Transferring loads through articulated joints always causes eccentric loading on the pipe. Engineered pressure transfer rings reduce the eccentricity by dimensions, but the global effect on the individual pipe can still be observed and should be considered. The eccentric axial loading is balanced by lateral forces acting on the jacking pipes, significantly increasing the risk of damage.

The relevant eccentricity not only comes from the articulation of a single joint, but is the result of different joint articulation angles on the front and back end of the pipe (Figure 2 and Figure 3). To minimize the eccentricity, a suitable pressure transfer ring and smooth steering of the machine are key.

Apart from a robust structural design of the jacking pipes, the design of the pipe joints is important as the articulation is concentrated in the pipe joints. The joint needs to be flush on the inside and outside of the pipe and seal the pipe against groundwater and soil even in articulated state. With the requirement of predictable behavior of the pressure transfer ring in mind, it’s key that the joint design seals the pressure transfer area as well to avoid soil or water to unpredictably impact the behavior of the pressure transfer ring. A suitable joint design consist of an external steel band or steel collar, cast into the concrete and a spigot end with the gasket in a groove on the outside of the pipe. These considerations are also valid for designed straight drives as steering corrections always force deflections on the pipe joints.

The joint articulation not only depends on the curve radius and the pipe diameter, but also on the pipe length. Shorter pipes reduce the joint articulation angle at a given diameter and radius, but increase the number of joints needed. Every joint is a weak spot in the pipe line and therefore the number of joints should be minimized. Also, shorter pipe increase the cost per linear feet, not only on the manufacturing side but also during installation as for every new pipe to be installed, all the utilities have to be disconnected and reconnected, leading to a slow advance rate. The key here is to use pipes as long as feasible.

To accommodate the lateral forces due to eccentric loading, the structural design needs to provide enough reserves. With a sophisticated monitoring system and the Hydraulic Joint as pressure transfer ring, the admissible jacking force on every pipe at any location and articulation state can be determined in real time with field measurements of the actual pressure and joint articulation the pipe is subject to. This way, the effective stress state of every pipe under every circumstance during installation can be understood, which is the most desirable key in risk management for a successful installation.

The alignment of a microtunnel consists of straight, curved and transitioning elements. Curves require navigation systems that can operate without line of sight between shaft and the machine.

Transitioning elements can be clothoids, which only gradually change the curve radius and not instantly as a curve element right after a straight element would do.

Such transitioning elements can be implemented in sophisticated navigation systems, supporting the operator to smoothly steer into the curve, therefore avoiding large differences in joint articulation over a short stretch, which is typically the cause for reduced admissible jacking forces or pipe damages.