You are at:Home»News»LA Metro Plans ‘Halfway to La Cienega’ Celebration 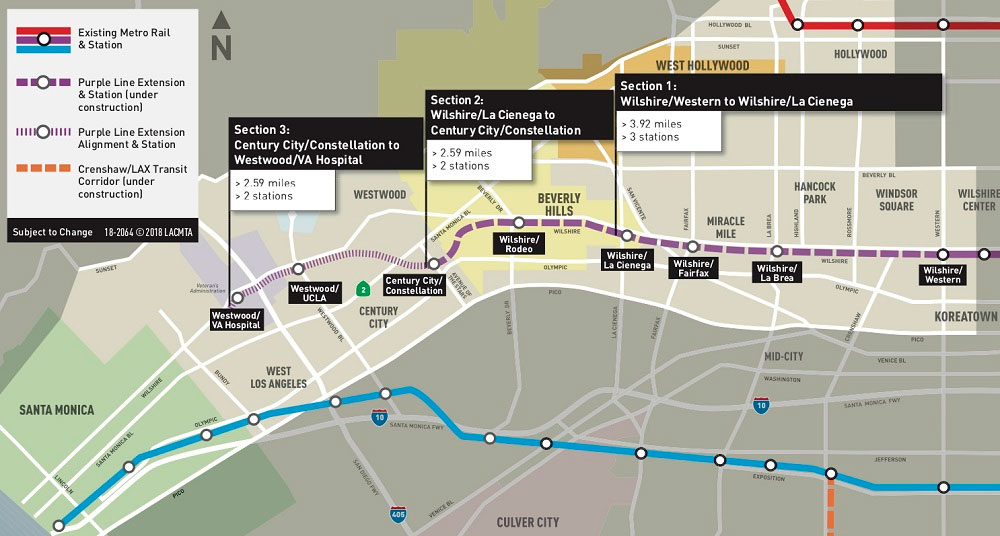 LA Metro is marking the halfway construction milestone for Section 1 of the Purple Line Extension with a community event planned for June 2 at the La Brea Tar Pits and Museum from 11 am to 3 pm. The event will feature live music and performances, games, giveaways and food trucks.

The nine-mile Purple Line Extension Project is being constructed in three sections. The first section, currently under construction, is forecast to open in 2023.

Section 1 is a 3.92-mile long subway alignment with three stations that is being constructed under Wilshire Boulevard in gassy ground and tar sands with prehistoric fossil deposits utilizing the design-build delivery method. NTP for the $1.636 million design-build contract was issued to Skanska/Traylor/Shea JV on Jan. 12, 2015. Tunneling operations began in October 2018. The tunneling operations will be staged through the shoring box of the Wilshire/La Brea Station excavation.

The scope of work includes 17,900 ft of twin-bore tunnel: Reach 1 is 9,600 lf between Wilshire/La Brea Station and Wilshire/Western TBM retrieval shaft; Reach 2 is 4,400 lf between Wilshire/La Brea and Wilshire/Fairfax Stations; and Reach 3 is 3,300 lf between Wilshire/ Fairfax and Wilshire/La Cienega Stations. There is also 600 lf of tail track to the west of Wilshire/ La Cienega Station where the TBMs will be buried. The tunnel is 18-ft, 10-in. inside diameter with 12-in. thick precast concrete lining. Depth varies from 40 ft and 100 ft. The alignment includes three stations and the western retrieval shaft and 23 cross passages. Tunnels are to be mined by two Herrenknecht EPBMs. Cross-passages are planned to be mined by the sequential excavation method using variety of localized ground support systems.

Anticipated ground conditions include: Soft ground consisting of Pleistocene-age (San-Pedro) and Pliocene-age (Fernando) formations; Some alluvium deposits and artificial fill areas above the tunnel; Tar sands comprise almost 25% of tunnel alignment; Expected water table up to 90 lf above tunnel crown; Presence of methane (CH4) and hydrogen sulfide (H2S) gases (tunnels are deemed “gassy” by OSHA). The project is 44% complete. Reach 1 tunneling is expected to complete in June 2019. TBM tunneling in Reach 2, 3 and the Tail Track is expected to progress through August 2020. Cross passage work in Reach 1 is scheduled to start in October 2019.