In order to keep pace with the needs of this vital and vibrant city, planners are upgrading transportation infrastructure by building the Confederation Line, a state-of-the-art light rail transit line that marks the largest infrastructure project in the city’s history since the construction of the Rideau Canal.

As the nation’s capital and fourth largest city in Canada, Ottawa is a modern city that is host to business, research and advanced technology centers, in addition to government buildings and institutions. Yet this cosmopolitan metropolis also has a historic feel with picturesque buildings and natural surroundings that add to its livability.

In order to keep pace with the needs of this vital and vibrant city, planners are upgrading transportation infrastructure by building the Confederation Line, a state-of-the-art light rail transit line that marks the largest infrastructure project in the city’s history since the construction of the Rideau Canal.

When complete in 2018 the Confederation Line will comprise 13 stations and span 12.5 km from Blair Station in the east to Tunney’s Pasture in the west. Included in the alignment is a 2.5-km tunnel through the downtown core, with three underground stations.

The $2.1 billion Confederation Line is being built through a public-private partnership between the City of Ottawa and the Rideau Transit Group, which is led by ACS Infrastructure, EllisDon Corp. and SNC-Lavalin. Ottawa Light Rail Constructors (OLRT-C), comprising EllisDon, SNC-Lavalin and Dragados Canada Inc., is designing and building the project. Other firms involved in the tunneling portions include Hatch Mott MacDonald and Dr. Sauer & Partners Corp. Under terms of the agreement, RTG (under the banner Rideau Transit Maintenance) will maintain the line until 2038.
The tunnel is currently under construction and has advanced approximately 30 percent. Three Sandvik roadheaders are mining simultaneously from three headings, mining from the East Portal, West Portal and central shaft. The three underground station caverns – Lyon, Parliament and Rideau – are also being mined by roadheader. 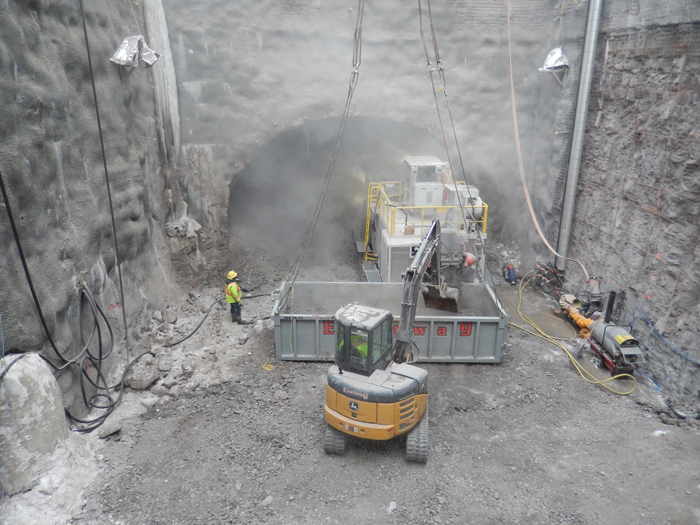 City planners and RTG were careful to minimize disruption as much as possible for the construction of the tunnels. This includes limited mucking from the East Portal and central shaft (24-hour-a-day mucking is allowed from the West Portal) to reduce noise during the night. Additionally, the contractor covered the East Portal with a wooden roof structure to help mitigate dust and noise.

On Feb. 21, the project was delayed when, in the overnight hours, a sinkhole developed within the construction area adjacent to Waller and Laurier streets in the vicinity of the East Portal. Damage was limited to utilities in the area. A report into the incident found that the ground was consistent with what was expected and that prescribed supports and procedures were being used, and that a previously excavated construction pit likely contributed to the sinkhole. The pit’s dimensions, about 7-8 m square, was small enough to be missed by the investigation program but large enough to create a problem. Tunneling resumed after a one-month shutdown to determine the cause of the sinkhole.

SEM consists of advancing in increments (headings and rounds), which are supported with reinforced shotcrete and steel support elements. The concrete lining has a defined stiffness and allows rock and soil settling to increase its self-supporting capacity until a safe and stable opening is created. SEM provides a high degree of flexibility to adjust the excavation approach and support measures for soil and rock conditions encountered.
“Each morning the team members, working with our consultants and partners, analyzes the ground and characterizes it into one of five classes to determine the type of support that will be used as we advance the heading,” said Humberto Ferrer, Deputy Project Director for the contractor.
The SEM method also minimizes longer term disruptions at surface. Excavation of the station caverns will be done within the tunnel; only entrance and ventilation structures will be constructed from the surface. Since excavation will be done underground, noise and vibration impacts can be kept to a minimum.

Architectural finishes and systems of the underground stations, tracks and systems will be completed in the final phases of construction prior to testing and commissioning.

Crews will be mining predominantly through limestone, the prevailing material found in the excavation area, as well as some soft materials such as clay and sands. On average in the running tunnel, each roadheader will mine up to 3 m per day.

When complete in 2018 the Confederation Line will comprise 13 stations and span 12.5 km from Blair Station in the east to Tunney’s Pasture in the west. Included in the alignment is a 2.5-km tunnel through the downtown core, with three underground stations.

A watering system (mister) and a ventilation system will be used to filter and minimize dust and control debris (excavated material particles) from the roadheader as it excavates face. Dust will get propelled into the filter, deposited onto the conveyor belt, subsequently removed from the tunnel by loaders and taken away from site by trucks to a designated area.

The majority of the noise generated by tunneling is expected to be contained underground and within the limits of the general construction site. Measures, such as adding silencer units to external fans, are being taken to attenuate noise at surface level.

The 135-tonne roadheader is approximately 20 m long and includes the cutterhead and loading device to transfer debris to a belt conveyor. It operates using electricity and moves on diesel fuel. Different pics will be used depending on the hardness and diameter of the tunnel. It is anticipated that approximately 50,000 pics will be required throughout the tunnel. The pics on the roadheader grind and rip the material at the excavated face into particles, normally not exceeding 10 to 15 cm in diameter, depending on the underground material type encountered. Occasionally, if the soil has deteriorated or due to joints in the rock, a larger piece can detach from the tunnel face. The larger piece would be crushed into smaller particles for easier removal.

Three roadheaders, one for each access point, will excavate up to 70 to 80 MPa UCS rock. The roadheaders were shipped preassembled in small to mid-size pieces from New York by trailers and from Austria by ship. Assembly of the machines took about 2 to 3 weeks. Local operators, mechanics and electricians were trained on using the equipment.

From the construction standpoint, Ferrer said that station cavern construction represents the most challenging aspect of the work. “In the Lyon Station, for example, spans the width of the street and we are in between two buildings foundations, and our structure must be independent of the buildings,” he said. “At the Rideau Station, we are building a cavern 21 m wide by 17 m high at the transition between rock and Rideau Valley. That is probably the biggest challenge in the work.”