You are at:Home»News»McCook Reservoir to Greatly Boost Flood Storage Capacity 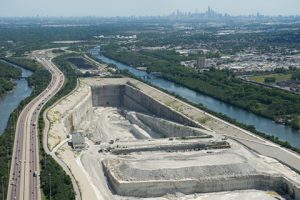 The Metropolitan Water Reclamation District of Greater Chicago (MWRD) and U.S. Army Corps of Engineers in December celebrated the completion of the first phase of the McCook Reservoir project, a key component of MWRD’s plan to reduce flood damage and sewer overflow pollution in the Chicago area. Black & Veatch has provided planning, design, engineering and construction support on various aspects of MWRD’s Tunnel and Reservoir Plan (TARP) since 2001, including design and construction services for the McCook Main Tunnel System (MTS) that connects TARP’s Mainstream Tunnel to the McCook Reservoir.

McCook Reservoir Stage I provides an additional 3.5 billion gallons of storage capacity to capture flood water and combined sewer overflows (CSOs) and is estimated to provide $114 million annually in flood damage and CSO pollution reduction benefits. TARP reduces flooding by storing CSOs, which during wet weather events would otherwise flow into and pollute Lake Michigan and the region’s waterways, until they are able to be treated. As a result, regional water quality is also enhanced.

“The McCook Reservoir will alleviate flooding impacts for millions of residents in the region. We are excited to celebrate the completion of the first phase, and look forward to continuing to bolster our flood mitigation efforts that support the local community with our project partners,” said Mariyana Spyropoulos, President of the Metropolitan Water Reclamation District Board of Commissioners.

With McCook Stage I on line, the TARP system now has a flood storage capacity of more than 14 billion gallons.

“The McCook Reservoir is one of the final components of TARP, one of the largest public works projects for pollution and flood control. It is the result of tremendous collaboration in support of an overarching goal to protect the environment. Including the McCook Reservoir and MTS, this project has helped restore the charm and quality of Chicago’s rivers and fostered greater connectivity to water resources for millions of people,” said Faruk Oksuz, Black & Veatch Vice President and project director in the company’s water business.

“From planning to construction, state-of-the-art practices such as deep rock grouting and one-of-a-kind high pressure roller gates for tunnels were applied throughout the project,” said Leon Schieber, Director of Business Development, Black & Veatch Federal Business. “The McCook Reservoir will protect Lake Michigan, the region’s water supply and the regional economy tied to Lake Michigan as well.”

In addition to 109 miles of deep tunnel systems and McCook Reservoir, TARP includes two other storage reservoirs – Majewski (350 million gallons) and the Thornton Composite Reservoir (7.9 billion gallons). When Stage II of McCook is fully completed in 2029, it will have a capacity of 10 billion gallons and surpass Thornton as the largest reservoir of its kind in the world.