Congested roads and railways make underground transport systems more popular. But more tunnels lead to greater risks of serious accidents where it can be difficult to evacuate travelers quickly. However, the results of METRO, a three-year research project, are helping to shed new light on the issues and lead to safer transportation systems.

Underground railways are complex systems, with a lot of people in a small space. This complicates both evacuation and rescue work when accidents occur. How quickly a fire spreads is the decisive factor for the time the travelers have to be evacuated from the area safely. 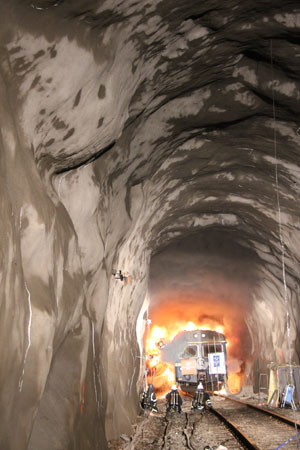 In autumn 2011, full-scale fire tests were carried out in one of the Swedish Transport Administration’s abandoned tunnels outside Arvika.

The METRO project is unique since many organisations, with different skills, work together to make underground railways all around the world safer. The project has shown that fires in trains can be greater than previously anticipated, but also that the development in the design of trains and the choice of materials is progressing in the right direction. The right choice of materials can make a big difference, says Mia Kumm at Mälardalen University.

The final results were presented at an international seminar at Rosersberg, Sweden, near Stockholm, Dec. 10-11 involving more than 160 participants from 20 different countries.

Some of the most important results from the research project are new design fires for underground stations and tunnels, new knowledge of how quickly people can be evacuated from trains in tunnels, what difficulties are encountered by disabled persons in evacuation situations, how the design of trains can be constructed to decrease the risks of personal injury in case of explosion, and what possibilities and limitations there are in rescue operations.

The project has demonstrated that it is very difficult to find your way in smoke-filled tunnels, but researchers have also identified a number of guidance systems that efficiently help people to find the right way out. One interesting discovery is that even simple systems based on sound signals work better than many of the conventional systems used today, says Daniel Nilsson, at the Department of Fire Safety Engineering and Systems Safety  at Lund University.

In autumn 2011, full-scale fire tests were carried out in one of the Swedish Transport Administration’s abandoned tunnels outside Arvika. In a global perspective, few full-scale tests have been carried out since they require large financial resources and a comprehensive organization. When constructing new buildings different computer models are often used to simulate fires and the spreading of smoke. Full-scale tests are invaluable in being able to verify these models and make the calculations more accurate.

Trains today have good fireproofing in themselves, but the cargo can be the factor that has significance for whether the fire develops into a flashover. Something that has also been shown to have a decisive effect is whether the train’s doors are open or not. For example, the gap between the train and the platform can have a big influence on both the spread of the fire and evacuation, says Professor Haukur Ingason at the SP Technical Research Institute of Sweden.

About the METRO Project

The METRO project is a large research venture dealing with fire and safety in underground mass transport systems, mainly underground railways. METRO is led from Mälardalen University and comprises over 14 million SEK, with a supplementary project of 4.8 million SEK, led by SP. In METRO, researchers cooperate interdisciplinarily across organizational boundaries. The research findings will improve safety in underground rail systems, but the knowledge will be able to be used in many different kinds of underground installations.

The project is funded by: SL, Formas (The Swedish Research Council for Environment, Agricultural Sciences and Spatial Planning), the Swedish Fire Research Board, the Swedish Transport Administration, MSB (the Swedish Civil Contingencies Agency) and the Swedish Fortifications Agency.

Background to Fires in Tunnels

What burns in tunnels is, in most cases, one or more vehicle of some kind. The special thing about tunnels is partly the ceiling, and partly the tunnel itself. The ceiling causes the flames to deflect and the flames, fumes and the ceiling heat radiate toward people and various objects in the tunnel. The hot and poisonous fumes move along the tunnel, thus constituting a great hazard to people who are in the tunnel or at nearby stations under ground level. The fire also spreads more easily to nearby vehicles, thereby increasing in intensity much quicker than out in the open.