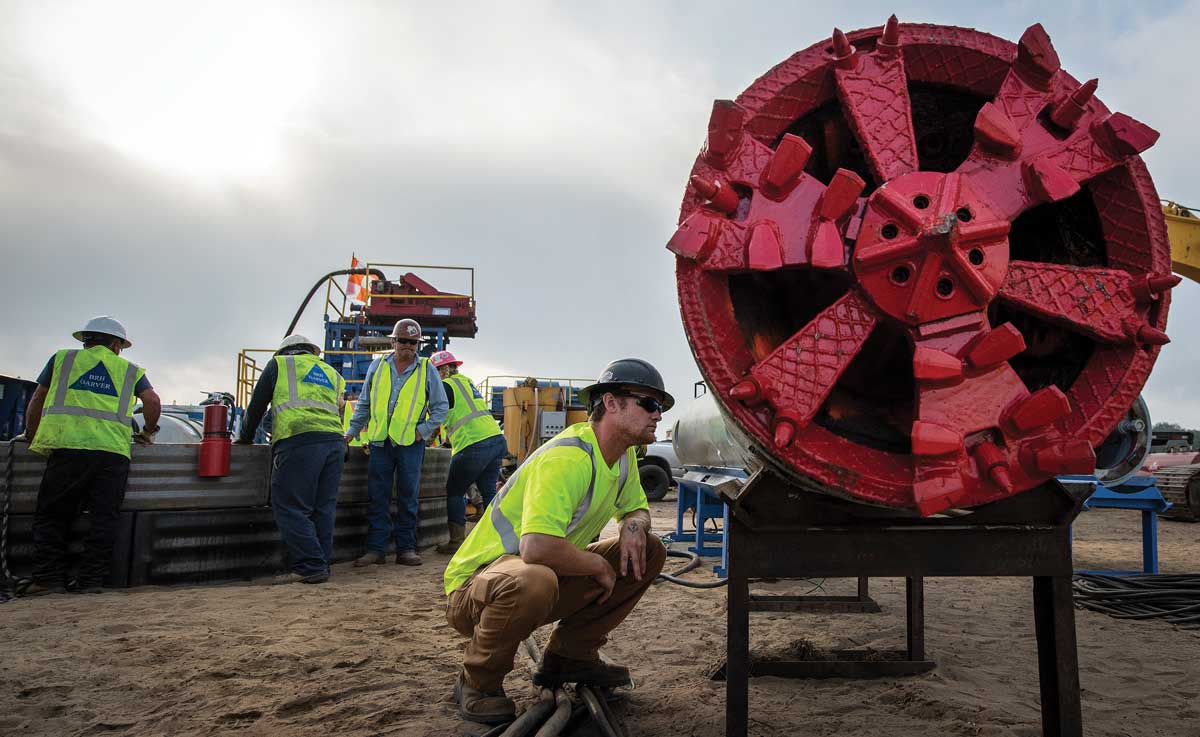 The Eglin Air Force Base, in western Florida and adjacent to the Gulf of Mexico, is the nerve center for an estimated 16,000 military and civilians dedicated to around-the-clock support of air defense military operations.

Aligning fuel offload and upload demands with base activities is a constant logistical challenge.

Contracted fuel trucks carrying jet fuel are continually in motion to transport fuel all around the base and from Naval Air Station Pensacola, over an hour away, to the base’s storage facilities.

A new $34 million underground fuel pipeline project will change all of that. Owned and designed by the U.S. Army Corps of Engineer (USACE), Omaha District, the Fuel Transfer Line Replacement project connects the 96th Test Wing storage tank to the 33rd fuel storage area. With the capacity to deliver 600-gpm, the improvement will significantly bolster flying operations and military readiness, with sizeable resource savings. 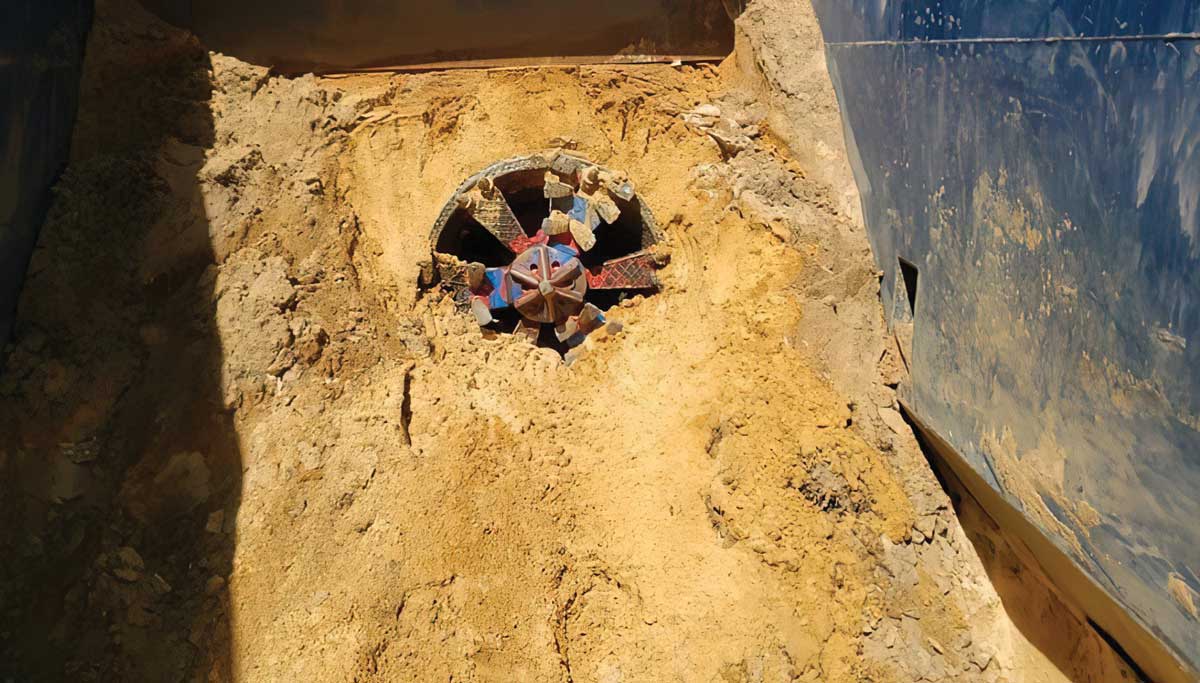 The SL30C MTBM emerges from the 4th of seven bore on the Fuel Transfer Line Replacement project at the Eglin Air Force Base.

BRH-Garver Construction, L.P. was awarded the microtunneling contract for the installation of 3,630-lf of steel casing to house 8-in. carrier pipe below the base airfields in seven drives. Slurry microtunneling was the requisite method of installation by the USACE to avoid shutting down Air Force operations.

The proposed fuel transfer tunnels would be bored a mere 10-ft below many of the base’s runways and taxiways while surface-level activities resumed as usual.

Senior project manager of BRH-Garver Construction LP David Kennedy remarks, “Microtunneling was the best solution because of existing utilities surrounding the airfield and the USACE not wanting to disrupt essential Air Force operations.”

An Akkerman SL30C Slurry Microtunnel Boring Machine (MTBM), with an increase kit to 32-in. outside diameter, was employed to install all seven drives.

Although it is one of the smaller diameter MTBMs offered by equipment manufacturer Akkerman, it is mighty. With 45,000 ft-lbs of torque, a VFD controlled cutter motor, and heavy-duty drive bearing for high thrust capacity, the machine was well equipped with the latest technology to handle the project specifications. A soft-ground cutter head, outfitted with carbide tipped bullet and chisel teeth tooling for soft, wet, and easily displaceable ground was mounted on the front of the MTBM.

The biggest project challenge was adhering to the USACE’s quarter-inch settlement specification for tunneling under airfield pavements. “Asphalt pavement is flexible by nature, and we were in 100% medium dense sand with only 10-ft of cover,” Kennedy describes.

Even though microtunneling had the potential for volatility, BRH-Garver’s skilled operators tailored their approach to the ground conditions for consistent and controlled mining from the control container console. “To avoid over or under mining, we reduced the flow to the cutting face and advanced the pipe at a rate of 6- to 12 in. per minute,” Kennedy says. “Fortunately, we had one of the most experienced microtunneling crews in the U.S. led by Scott Walker, Jesse Serrano, and Jose Dela Cruz. Their 100-plus years of combined tunneling experience helped guide this project to completion.”

Just as mining operations were on course for smooth sailing, the advent of the global pandemic encroached on American shores. “The Coronavirus pandemic began in the United States 30 days after we started the project”, says Kennedy.

To contend with the pandemic’s risk to their crew and potential gating factors for production, BRH-Garver consulted with an industrial hygienist to protect its team from potential COVID-19 related health hazards while working in confined spaces.

Kennedy explained, “As advised by the industrial hygienist, we sanitized the tunnel shafts with a bleach and water solution up to three times a day,” Kennedy explains. “Our employees were required to wear face coverings when social distancing was not possible, and we supplied N95 masks to those working in confined spaces.

“We also separated employees into single bedroom housing and arranged ground transportation instead of flying for traveling home with extra time off to make up for the increased travel time,” he describes.

Even with the extra measures, microtunneling production would not be slowed down. By adding additional resources, BRH-Garver was able to set-up, install, and move to the next drive location at an average pace of one drive per month, working 10-hour shifts, six days a week.

Because of the shallow cover and the owner’s quarter-inch settlement prerequisite, the operator’s competence with the MTBM was critical for repeated success on each drive. Using their above-ground Akkerman microtunneling control container, active laser target system, and the guidance system programs, the operator actively assessed machine positioning, and controlled mining fluctuations to keep the MTBM on course.

The MTBM emerged into the reception pit for the final time on Aug. 25, 2020. BRH-Garver’s crew successfully achieved the line and grade for each tunnel, and the project was completed ahead of schedule.

The remaining open-cut footage and pipeline modernization efforts are anticipated for completion in August 2021.

“We were fortunate that we had no COVID-19 outbreaks or any injuries on this project and managed to complete the microtunneling runs one month ahead of schedule while keeping our crews healthy and productive,” Kennedy says.

Providing critical fuel transfer infrastructure that directly contributes to the success of our country’s air defense, while keeping hard-working, essential employees safe is certainly cause for national pride.