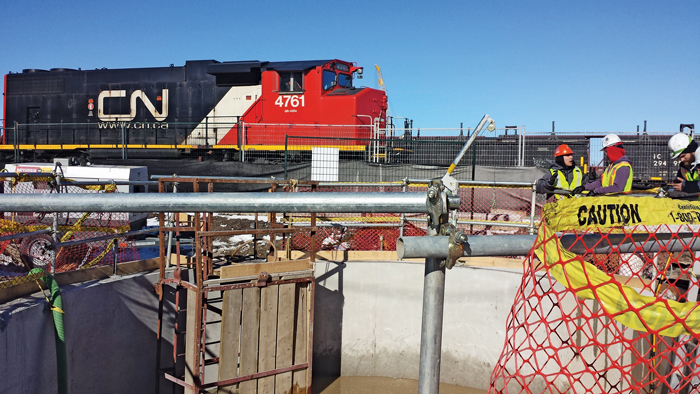 If at first you don’t succeed, try again.

That’s a familiar adage and one that the City of London, Ontario, took to heart when working on the Burbrook Trunk Storm Sewer Project.

After a 10-year hiatus — and thanks to improved trenchless technologies — the project, which helps relieve flooding and sewer backups to 350 properties in the Burbrook drainage area, officially wrapped in May 2016.

London officials began identifying and developing a strategy to relieve street flooding and basement sewer backups in the Burbrook storm sewer drainage area in the 1990s. The three-phase project would create a large-diameter trunk storm sewer to eliminate the combined sewer in place from the South Branch of the Thames River to Dundas Street.

According to a consultant’s findings, the project was needed because of the undersized combined sewers where surcharging occurred for 1-year storm events resulting in sewer backups and basement flooding.

The sewer capacity is also aggravated by a lack of overland flow routes, which results in street flooding. In addition, the existing 100-year-old infrastructure requires renewal and building the new trunk sewer will allow that to happen in a systematic fashion. 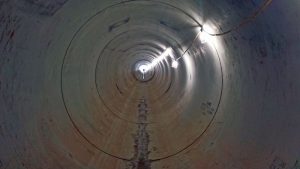 The Burbrook trunk storm sewer project is the largest diameter microtunnelling project in Ontario to date. In addition to the geological challenges Hatch and the City of London had to convince the public and local stakeholders that the project could be engineered to be successful, and that there would not be a repeat of the previous failure.

In 1999 and 2000, the first two phases were successfully completed and in 2003 the third phase — which included two crossings under the Canadian National (CN) railway — began. At the time, the contract documents allowed for an open-face style tunnel boring machine (TBM) in combination with advance dewatering, though other options included ground stabilization, an earth pressure balance TBM, a closed-face TBM, traditional open face mining or a combination of methods.

Due to high costs and limited North American availability of the other methods, the contractor opted for the open-faced TBM with advanced dewatering and construction began in 2003. The project involved an open-cut portion and two bores under the CN railway including one under the rail yard which consisted of two high speed lines and 20 other sets of tracks.

During the longer bore under the tracks settlement in the ground occurred such that both the City of London and CN railway officials thought it prudent to cease construction, pull the machine out, restore the site and rethink the situation.

“The water table in that area is very high and the soil is almost like beach sand,” says Paul Choma, P.Eng, construction administration engineer for the City of London. “It continued to flow into the open-faced machine and we had no way to control it.”

From 2005 to 2012, the city worked with engineering and consulting firms including Hatch Mott MacDonald — to evaluate other tunneling methods, and Dillon Consulting — to analyze the value of sewer separation versus other options. It was ultimately determined that building the new trunk storm sewer via tunneling was still the best course of action and the city set about collecting the funds to allow the project to proceed successfully. 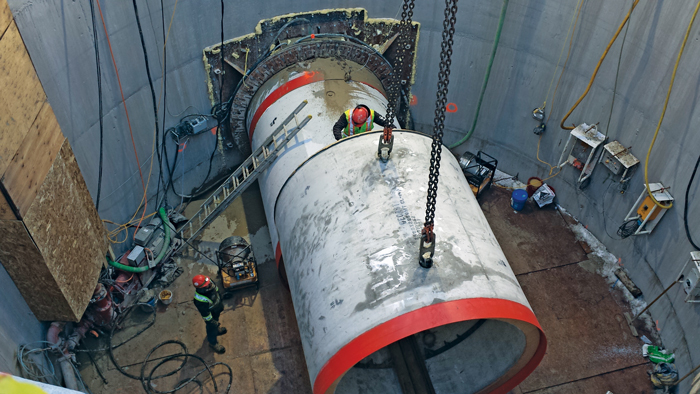 A report to the City of London Civic Works Committee notes that since the failure in 2003, the staff has taken steps to validate and mitigate risk and build the Burbrook project correctly. It also states that the project has been deferred as long as possible and other infrastructure renewal projects cannot proceed until the trunk storm sewer is installed. The report further states that in the time since the 2003 failure, microtunneling technologies advanced and one of the main players in the Canadian microtunneling industry — Ward & Burke Microtunnelling Ltd.— emerged.

Unlike a conventional tender where the lowest bid — not necessarily, the best qualified — wins, the City of London opted to hold an interview process for the selection of the design and the construction team. A price was then negotiated for the successful engineer and contractor ensuring the best-qualified team was in place for the high-risk project.

By 2014 the City of London assembled both an internal team and an external team that included Ward & Burke and Hatch Mott MacDonald (now Hatch) to manage, reduce and design out as much risk as possible for the microtunneling method to succeed. Both outside parties worked with city employees to strengthen specifications, methodologies and design. The city chose Hatch and Ward & Burke because of their status as world leaders in the microtunneling industry.

“There are several reasons why microtunneling was the best suited tunnel technology for this project.  Firstly, slurry-based microtunneling allows earth and groundwater pressures to be counterbalanced during tunnel mining, reducing the risk of overmining and related ground movements.  This was critical given that tunneling took place below active rail lines,” says Marc Gelinas, P.Eng, principal project engineer at Hatch. “Second was the fact that microtunneling allowed for direct installation of the product pipe in a single pass. This reduced the overall diameter of the installation, further reducing the risk of ground movements.”

In addition to the change to microtunneling, the city opted to microtunnel both sections of the 2015 phase — a 40 m crossing under two sets of rail tracks between Margaret Street and Brydges Street and a 174 m crossing under two high speed rail tracks and the rail yard. Both crossings were completed using 2,500 mm internal diameter concrete jacking pipe from Decast making this the largest diameter microtunneling project to date in Ontario. At a minimum there was approximately 7 m of ground separating the microtunnel boring machine and the rail tracks.

“The microtunnel system is very common across Europe and Asia for the last 20 years and the technology is well developed. However, it has taken more time to develop in North America,” says John Grennan, Ward & Burke’s director of Canadian operations. “We are seeing much more acceptance and openness for new systems in the last few years that has greatly helped improve the technology use. In the last 10 years, the microtunnel boring machines are also being produced with more power and in greater diameters, allowing them to do larger scale projects that previously would not have been possible.”

Using a Herrenknecht AVN 2500 microtunnel boring machine for the project with ancillary separation equipment on the surface manufactured by Herrenknecht and ITE Gmbh, Ward & Burke arrived onsite Oct. 9, 2015, and moved offsite May 20, 2016. The actual tunneling work took a total of about 5 days with crews working around the clock through to completion.

“There were strict settlement criteria in place on the rail infrastructure. Anything over 8 mm was considered an alert level with anything over 15 mm requiring complete shutdown of our tunnel operation,” Grennan says. “Fortunately, we never had any settlement issues during construction which was a true testament to the equipment after the previous attempt.”

In addition to the aforementioned beach-like sand soil conditions that doomed the 2003 project, Ward & Burke and Hatch had to contend with designing and building a project that tied into existing infrastructure and avoided the abandoned shorings from the 2003 attempt.

“Now that this storm sewer is in place and active, all of the upstream roads can be reconstructed and have the storm and sanitary sewers separated,” Choma says. “This opens up $40 million of upstream work. There are three jobs ($10 million) currently under way that are ready to go.”

This project was completed on time, under budget and met all of the project objectives, Based on the City’s schedule, the entire Burbrook storm sewer system improvement projects should be complete by 2025.