You are at:Home»News»International News»Milestone Reached on Milan’s M4 Metro Line 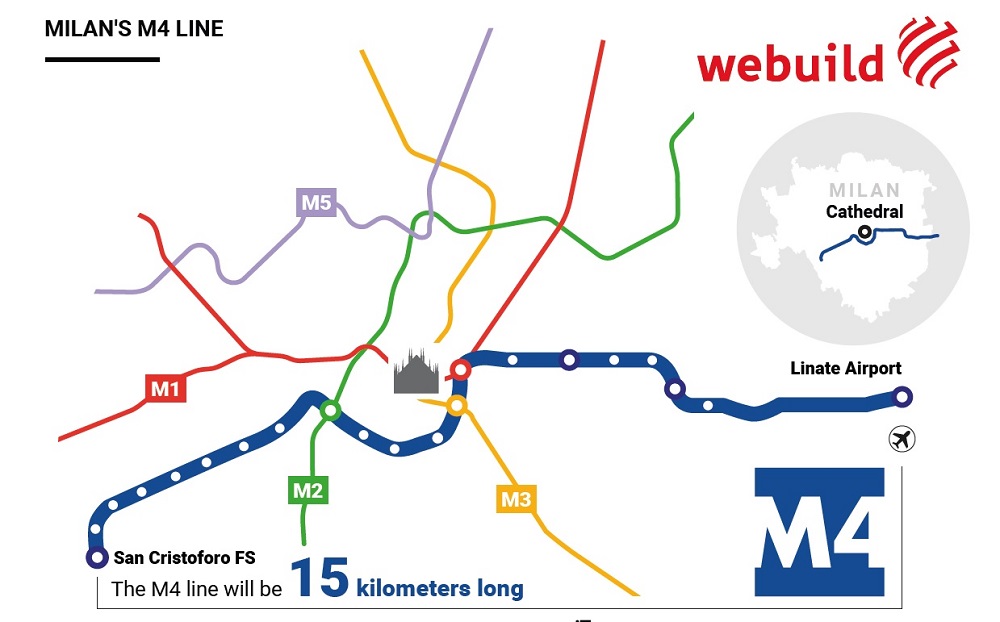 The project employed 1,500 people, who were able to work during the COVID-19 lockdown thanks to the extraordinary safety measures deployed on site. Work on this strategic project for sustainable mobility led by the Webuild Group proceeds unabated in order to open the first section of the line between the Linate city airport and Forlanini FS station in the spring of 2021.

Commissioned by the City of Milan, the line is being built by mixed concession operator M4, which will also manage the line in which the city and a group of private partners led by Group are investors.

Attending the breakthrough at the site of the future station were Milan Mayor Giuseppe Sala; Marco Granelli, city councilor in charge of mobility; Webuild General Manager Massimo Ferrari; M4 SpA President Fabio Terragni; and Webuild’s Guido Mannella, head of the consortium of builders, CMM4. After the arrival of the second TBM in the coming days, both machines will be dismantled. The rails will then begin to be placed along the floor of the two tunnels, along with the installation of the electric power supply system and computer guidance system.

The excavation work, which reached a monthly production record of 540 m, operated in a complex geological and geotechnical context. The complex management of 600 vehicle movements per day – 15,000 in a single month – in a densely populated city as well as the process of removing excavated material with a minimum impact on the quality of life of residents and merchants on a project with 56 work stations across the city center highlights the Group’s commitment to reducing pollution during production.

The line will be 15 km long with 21 stations, crossing in a mere 30 minutes the historic center of the city. It will link the eastern part of the city where the Linate city airport is located with the San Cristoforo FS station to the southwest. Its intermodal connections with other lines will expand the city’s network of public transport to improve the environment and Milan more sustainable, taking some 16 million vehicles off the streets every year and reducing CO2 emissions by 30,000 tonnes a year.

Milan’s M4 metro line is the latest example of Progetto Italia, the Group’s initiative to help restart projects in Italy. Work on the project, begun by Salini Impregilo and Astaldi before they came together to create the Webuild Group, is proceeding in full respect of the deadline set by the client, maintaining a close rapport with the public institutions to guarantee employment on site and along the supply chain.

The Group, which built in record time the Genova San Giorgio Bridge inaugurated in early August, is working on some of the most strategic infrastructure projects in Italy. In addition to the M4 in Milan, it is working on the high-speed railway between Verona and Padua as well as the one between Naples and Bari. It is excavating the Terzo Valico dei Giovi high-speed/high-capacity railway between Genoa and Milan and taking part in the development of the Brenner Base Tunnel. In southern Italy, it is working on the 106 Ionian state highway and the Bicocca-Catenanuova railway in Sicily. It has also assumed a project assigned to Astaldi for the Naples metro system. The Webuild Group employees nearly 11,000 people directly and indirectly in Italy, a number that is set to rise to more than 15,000 by 2022.