Why TBMs may be the Way of the Future 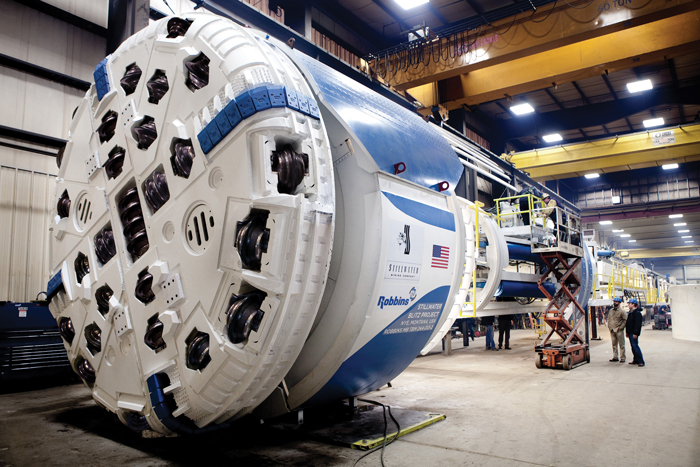 The use of TBMs have become commonplace on tunneling jobs throughout North America and across the globe, but despite their ability to safely and efficiently create space underground, they have yet to make their mark in mining. In order to make inroads into the mining market, acceptance and the meeting of certain criteria are required.

“Miners can use TBMs in the same way as civil infrastructure projects — the only difference is that in most tunneling projects, the hole in the ground is the product. In mining, the tunnel is the means to an end. Mining companies need to familiarize themselves with the technology and become more comfortable in using TBMs with their own crews. I don’t think that has happened yet,” said Dr. Jamal Rostami, Centennial Mining Engineering Chair at Pennsylvania State University.

Rostami cites several factors – from maneuverability to a lack of skilled workers – that are currently the limiting factors in many mines. But despite these issues, some mines have fully embraced TBMs and have reaped significant benefits.

“Stillwater Mine is the best at this, because of the fact that the company is comfortable with TBMs and has used them over and over,” said Rostami. The U.S. mine launched its fourth TBM, a 5.5-m diameter Robbins Main Beam machine, in autumn 2012. Its TBM legacy is a model for recent efforts by mines in Chile, Australia and China that may well bring on the next wave of mechanized mining.

TBM Use in Mines
According to Rostami, TBMs are well-suited for main access tunnels, as well as exploratory bores, ventilation tunnels and other types of long tunnels. Mines that opt for TBMs often employ the machine for its usable life, boring thousands of meters of tunnel. “TBMs can reduce the size of the workforce that companies have to maintain, and the work environment is better for laborers as compared to drill-and-blast. They offer all of the advantages of mechanical excavation — faster advance, better precision and control, better ventilation, smoother tunnel profile, less ground support, and more uniform muck for processing.”

Despite the obvious benefits, there are several barriers to more extensive adoption of TBMs. “Machines are the way of the future and are safer than D&B operation, but to realize these advantages mines need to invest not only in purchasing the machine, but also in training the crew and hiring skilled workers to run the machines,” said Rostami.

Capital cost to purchase a TBM is higher than a drill-and-blast operation — an obvious barrier to early adoption. However, Rostami emphasizes that overall costs during the project can be much lower. In fact, mines such as Stillwater have reported that their TBM operations run at about 33 percent of the operating cost of similar D&B operations. “TBMs offer a cheaper cost per meter of tunnel once the mine is familiar with the method and is able to run the machine in-house,” he continued.

Managers at Stillwater Mine added some limiting factors for the machinery. “The size of a TBM can be an issue for mining, because of the ability to make turns. With conventional mining you have a 20-m turn radius. TBMs have a 300-m turn radius,” said Tyler Luxner, Project Engineer at Stillwater Mining Co. For that reason, Rostami envisions a more modular future TBM design for mines, able to make sharper turns and launch in shorter starter tunnels.

The maneuverability is not necessarily a problem though, if long and straight tunnels are the goal. “It depends on the geometry of the ore body (reef) and the access,” explained Mike Koski, Chief Geologist at Stillwater Mining Co. “In our mine the ore body runs parallel to a river valley that runs east to west for 45 km. That lends itself well to TBMs, because you can develop large reserve blocks that are easier to ventilate and don’t require as much ground support as a drill-and-blast tunnel.” The reef at Stillwater Mine, as a seam-like ore body, is well-suited for the longer excavations that TBMs make efficient. Koski continued to say that other types of mines, such as those operating in vast porphyry systems with long haulage tunnel access, could also benefit from the use of TBMs.

Stillwater Mine’s TBM Legacy
At Stillwater Mine, located in Nye, Mont., TBMs have been in use for years. For Luxner, TBMs guarantee a fast advance rate in life-of-mine access tunnels. “The common perception in mining is that TBMs are large and unwieldy machines, but we have used them successfully for 24 years.”

The platinum and palladium mine first purchased a 4.0-m diameter Kelly-type TBM in 1988 to excavate a mine access tunnel through the area’s characteristically layered gabbro, norite and anorthosite rock. “We were faced with trying to further develop the mine and open up its reserves, but one of the challenges was the ventilation. We wanted to reduce the cost of driving foot wall laterals, but didn’t want to have vertical ventilation shafts drilled, like those that are necessary for D&B. We also determined that ground support for circular tunnels would be less,” said Koski. The mine wound up using that machine for several tunnels in the late 1980s and early 1990s. “I think our early estimations were spot on – the ground doesn’t need to be supported nearly as much. For long chunks of footwall lateral, it’s a good way to go.”

In 1999, Stillwater Mine purchased a refurbished Robbins Main Beam TBM from Magma Copper Mine in Arizona, using it to excavate access tunnels in the East Boulder section. “We drove twin tunnels, and then mined between them to create the main access for the East Boulder part of the mine,” said Justus Deen, Manager of Technical Services at Stillwater, who oversaw the East Boulder bore. According to Deen, the Robbins machine is one of the oldest working TBMs, in operation more than 20 years, and has bored more than 10.3 km since its commissioning. The machine recently finished up a 2.6-km long extension at the East Boulder Mine, known as the Graham Creek expansion.

Blitz Tunnel
Stillwater Mine’s latest endeavor is the Blitz Tunnel, a development tunnel of at least 7.1 km that will provide information about the reef along the eastern portion of the mine. A 5.5-m diameter Robbins TBM is determining the location of the reef in relation to the TBM while simultaneously creating a rail haulage tunnel that will be used for the life of the mine.

Detecting the reef in relation to the TBM requires careful analysis using two core drills mounted on the machine. “Steering the TBM is an interesting process because we have very complex geology here. We do diamond (core) drilling ahead of the machine, above the machine, and to the side after every 150 m. We drill and log the core right there while we are drilling it, then interpret the results, so it is concurrent with boring,” said Deen.

The operators make adjustments to the TBM bore path based on the perceived distance to the reef. “We don’t want to get too far away from or too close to the ore body. The ore zone is located in a very distinct layer of igneous rock, so if we penetrate the right rock types then we know we are in the right place, and if we see some ore we know exactly where we are. Platinum and palladium is hidden in base metal sulfides, so we look for the presence of the ore, but those metals are only present in core samples about 50 percent of the time, so the rock types guide us,” said Koski.
Geotechnical probe drilling is a regular occurrence on the TBM, in addition to core drilling to identify the reef position. “At the same time that we are diamond drilling, we also want to identify rough ground conditions that are ahead, such as weak rock, water and dykes. We probe ahead every 550 ft and look at the results, and in that way we will know we are placing footwall laterals in the best possible ground,” continued Koski.

The TBM, now nearly 500 m into the bore, is excavating norite rock using a variety of types of ground support. The team is utilizing 2.4-m resin bolts and 1.5-m friction bolts with wire mesh for primary support. If more difficult ground is encountered, the machine is able to switch to the McNally Support System. The system, used exclusively on Robbins TBMs, has been employed successfully in very deep tunnels including the 2,000-m deep Olmos tunnel in Peru. The method utilizes steel slats that are extruded from pockets in the machine’s roof shield as the TBM advances. The slats are bolted in place using rock bolts and steel straps, creating a network of support that prevents fractured ground from shifting and collapsing.

The average advance in the Blitz Tunnel is 9 m per day, with a best day of 20 m in an 11-hour period. “The Robbins machine has performed well so far. The core parts of the machine – the cutters and main drive/propel system – have exceeded expectation. We are still optimizing the roof bolters,” said Luxner. The crew has performed the first probe and core drills as well, providing valuable information on the ground conditions ahead of the TBM.

The Next Level
While Stillwater is the prime example of TBM use in mining today, other mines are gearing up for mechanized operations. Mines in Chile and China have announced plans for TBM usage, while Australian coal and gold mines are moving forward with plans for TBM excavation of access tunnels. These decline tunnels, often bored at a downgrade, allow for access of deep ore bodies to extend the life of the mine. The machines and their muck removal systems are specially designed for the steep gradients.

Non-circular tunneling machines are another option being investigated by mines, says Rostami, because they create a flat invert for rail and muck haulage without the need for invert segments or controlled blasting. He still emphasizes the need for internal training by the mine or equipment manufacturer, however, so the mine doesn’t feel it needs to outsource the mechanized operation to another company.

Ultimately, the benefits of TBMs when the mine is familiar with the technology are clear: “TBMs offer faster advance rates than drill-and-blast, and the drives are easier to ventilate. It’s also easier to train our TBM miners, as the required skill set is not as complex,” says Deen.

THIS Article was submitted by THE ROBBINS COMPANY.