You are at:Home»News»Names Selected for SF Central Subway TBMs 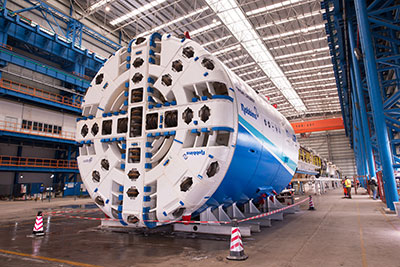 The San Francisco Municipal Transportation Agency (SFMTA) , which manages transportation in the city, including the Municipal Railway (Muni), on March 7 announced the names of the tunnel boring machines (TBMs) that will excavate and construct the Central Subway tunnels. The two tunneling machines will be named Big Alma, after “Big Alma” de Bretteville Spreckels, and Mom Chung, after Dr. Margaret “Mom” Chung.

The first of the machines, Mom Chung, is expected to arrive in San Francisco in April. The 300-ft-long machine will be assembled within an excavation on 4th Street between Harrison and Bryant streets and will start building the tunnel for southbound trains about two months later. Big Alma will arrive soon after Mom Chung to construct the northbound tunnel.

As tunneling proceeds, updates about the TBMs, including photos of the machines and the tunnels, will be posted on Twitter. The public may follow the TBMs’ tweets at the usernames @BigAlmatheTBM and @MomChungtheTBM.

“These two state-of-the-art machines will help us connect our most dense and fastest growing neighborhoods in San Francisco. From South of Market to Chinatown, the Central Subway will bridge our vibrant communities and vastly improve transportation options for residents and visitors,” said Mayor Edwin M. Lee.

“These machines will help build the San Francisco of the future, just as their namesakes helped build the dynamic San Francisco of today,” said SFMTA Board Chairman Tom Nolan. “The Central Subway will provide efficient, convenient transportation for tens of thousands of Muni customers daily.”

The names were selected by the public in an online poll held in January. Participants could select up to two names, one for each TBM. Of the 1,453 responses, Big Alma was the top vote-getter at 682 votes. Mom Chung took second place with 487 votes, closely followed by Firebelle Lil (451 votes), Mary Ellen (437 votes) and Juana (148 votes).

In tunneling tradition, the custom of naming TBMs is believed to bring good luck to tunneling projects. The names will remain in official use by the SFMTA and the tunneling contractor throughout the duration of the project.

“Big Alma and Mom Chung will construct San Francisco’s first new subway tunnel in decades, bringing together neighborhoods of our city that have long been in need of improved public transit,” said Ed Reiskin, SFMTA Director of Transportation. “We are happy to have included the public in this exciting part of tunneling tradition. We thank everyone who voted for contributing to this important project.”

The TBMs will arrive in several parts, to be assembled at the site on 4th Street between Harrison and Bryant streets where tunneling will begin.

About the Winning Names: 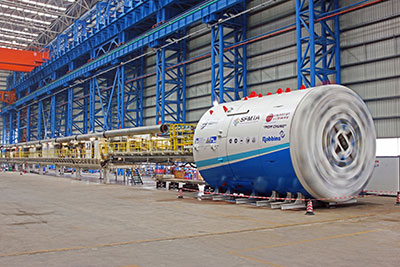 n  “Big Alma” de Bretteville Spreckels (1881-1968): Known as “Big Alma” (she was 6 ft tall) and “The Great-Grandmother of San Francisco,” Alma de Bretteville Spreckels was a wealthy socialite and philanthropist who, among her many accomplishments, persuaded her first husband, sugar magnate Adolph B. Spreckels, to fund the design and construction of the California Palace of the Legion of Honor at Land’s End in San Francisco. A model in her youth, Spreckels was the inspiration for the “Victory” statue atop the Dewey Monument in the center of Union Square.

n  Dr. Margaret “Mom” Chung (1889-1959) was the country’s first female Chinese-American physician, practicing in the heart of San Francisco’s Chinatown. During World War II she “adopted” more than a thousand “sons,” most of them American servicemen, mentoring them, sending them presents and sharing meals with them during and after the war. She was also one of the earliest supporters of women in the Navy. When one of her “sons” became a congressman, he filed the first legislation to create a female branch of the Navy in response to a phone call from “Mom Chung.”

About the Central Subway Project

The Central Subway Project is the second phase of the SFMTA’s Third Street Light Rail Transit Project. The first segment of the T Third Line opened in April 2007, restoring light rail service to a high transit-ridership area of San Francisco for the first time in 50 years.

The $1.6 billion project will be funded using a variety of federal, state and local sources, including $942.2 million from the federal New Starts program. Of the total New Starts investment, $177.4 million has already been awarded to the Central Subway Project, and a Full Funding Grant Agreement (FFGA) was awarded in October 2012.

The Central Subway is expected to open to the public in 2019. For more information, visit us online at www.centralsubwaysf.com.