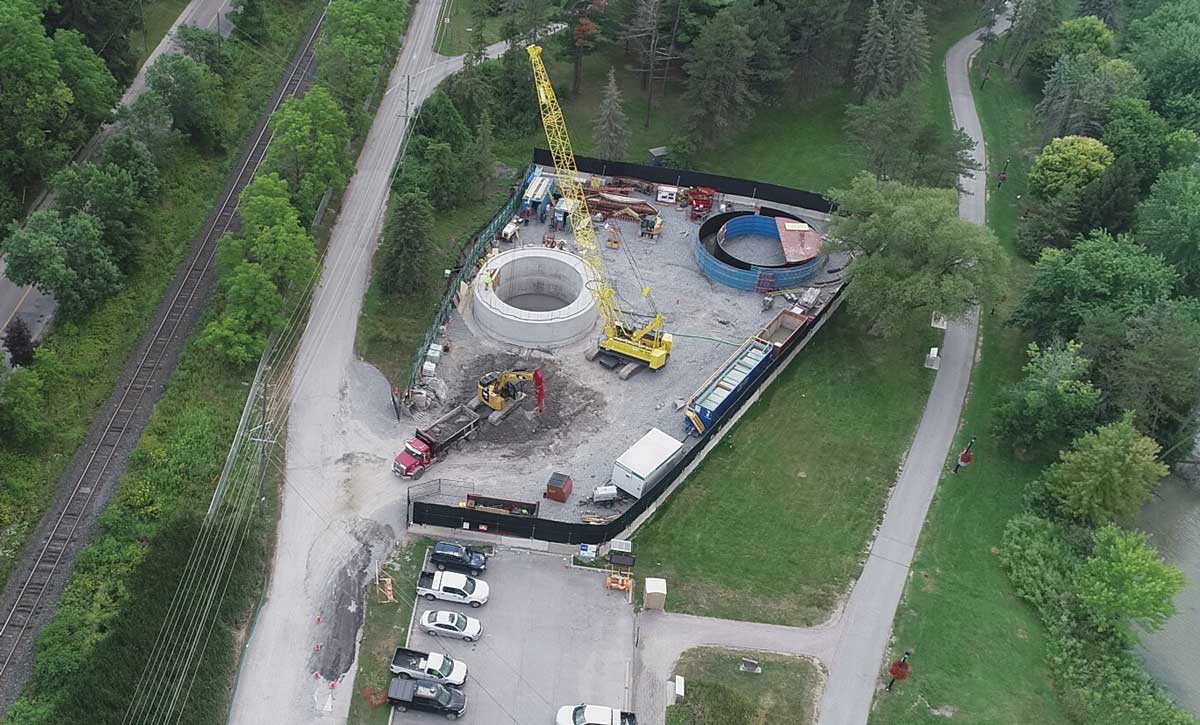 Shaft locations were selected to cause as little disruption as possible during the project. Settlement monitoring was key throughout because of the tunneling operation’s proximity to Metrolinx rail lines.

With the York Durham Sewage System reaching its capacity in the Town of Newmarket, leadership in the York Region identified it for an upgrade in the Region’s 2016 Water and Wastewater Master Plan.

The York Durham Sewage System (YDSS), originally built in the 1980s as a single forcemain by the Province of Ontario, was transferred to York Region in the 1990s. The Town of Newmarket’s local sewers connect to the YDSS and the forcemain conveys effluent to the Duffin Creek treatment plant.

“Within the Region, these are the only major forcemain pipes that have not been twinned,” says Susan Hansler, P.Eng., PMP, project manager, capital planning and delivery, Environmental Services Department at York Region. “We are twinning the forcemains to make the York Region’s sewage system more resilient and provide additional system security for the aging single forcemain infrastructure, which is essential for the Town of Newmarket.”

With the twinning project on the roster of scheduled capital improvements, the York Region worked with its design consultant GHD to design a plan that would maximize its dollars and minimize disruption.

“One of the concerns we had at the onset of planning was that the Town of Newmarket is a busy and vibrant town and this forcemain route runs right through the heart of the city (its downtown core, major streets, several well-used parks and public trails), has three rail and 11 river crossings and is within a regulated, environmentally sensitive area,” says Hansler. “Going into it, we wanted to minimize the disruption to the public and the environment.” 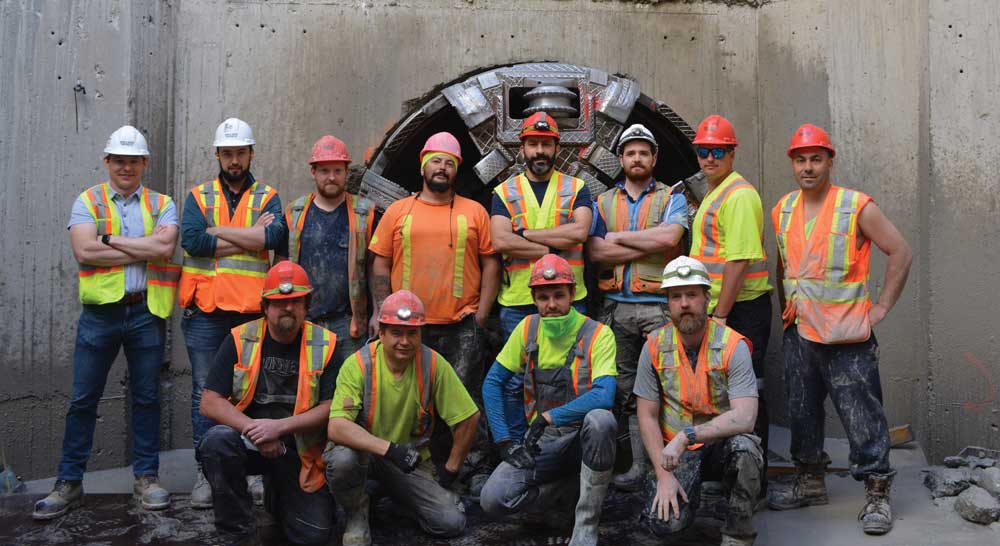 The YDSS microtunneling team of Ward & Burke celebrate the successful completion of the microtunnelling drive.

Through consultation with industry experts, GHD quickly determined that a mostly trenchless approach would be most beneficial. More specifically, the microtunneling of a two-pass system for the approximately 5.5 km long project.

According to the project’s website, the overall project involves:

“One of the reasons why GHD selected microtunneling was to address our concerns. And when we looked at the location of the construction sites, all were chosen with the thought of minimized disruption,” Hansler notes. “When we did get into construction, Ward & Burke offered further ways to minimize this disruption by eliminating three construction areas by lengthening the drives.”

With a design in place that called for a mix of 5,040 m of microtunneling and 480 m of open cut work, the project went to tender. Winning the project was Ontario-based Ward & Burke Microtunnelling Ltd. Ward & Burke are credited with bringing microtunneling back to Ontario in 2011 and have worked with York Region on previous projects. The first being the Keswick Effluent Outfall project in 2013, which was the first wet reception of a microtunnel boring machine (MTBM) in Canada. 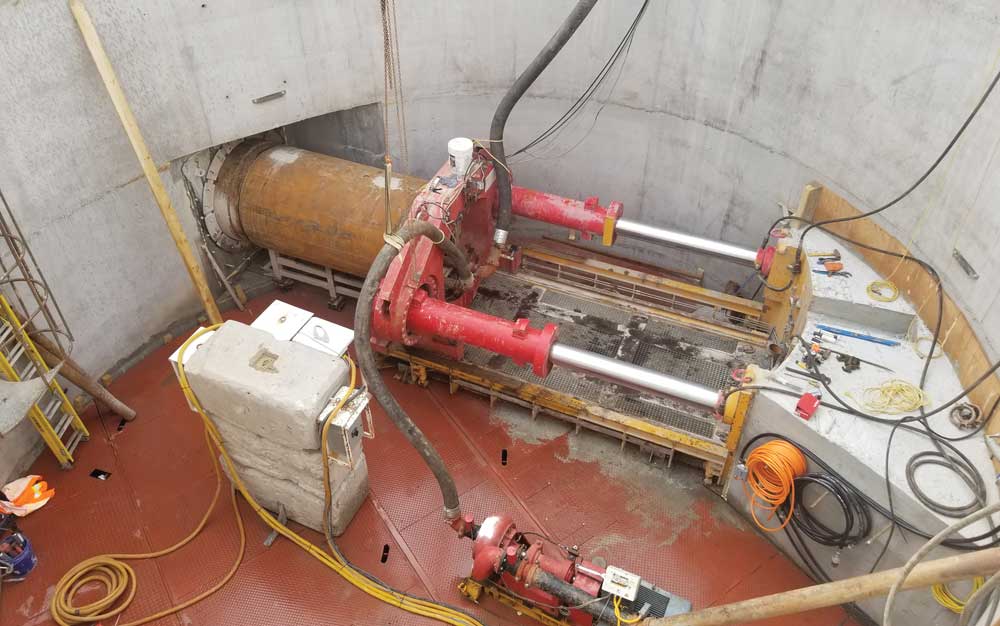 “When we looked at the project from a microtunneling aspect, the main forcemain alignment already had some fairly long tunneling drives, but there were two shafts along the original design alignment that were located in difficult to build locations,” says John Grennan, director, Ward & Burke. “Our opinion was that those two shaft locations brought unneeded risk to the project. We proposed to eliminate the two locations by extending the microtunnel drive lengths. By eliminating those two shafts, we ended up having…I suppose…two record-setting distance drives, in terms of length, in Canada. One was 950 m long and the other being 1,132 m long.”

Eliminating two shafts to bring down the risk of a project is a bold move considering the risks involved with long drive lengths, however, Ward & Burke backed up the suggestion offering data from similar projects it completed in Europe.

“Their longest drive length, before we offered any design changes, was 832 m. That was longer than others designed in Canada, or the U.S. for that matter, at that time,” says Grennan. “Because of our experience, our systems and our capabilities, it was our role to prove that we would be able to go that distance. We showed where we would install intermediate jacking stations, how we would manage the jacking loads, how we would lubricate the tunnel and how we would power the tunnel boring machine. We were able to prove to them that going longer was a low-risk consideration.”

Grennan, a longtime tunneller, went on to note that in the European marketplace, where Ward & Burke cut its teeth, a 1,200 m drive was achieved two decades ago. Because the market here is not as mature, these longer lengths are quickly being worked towards. And each successfully completed project boosts owner and engineer confidence alike.

“The North American marketplace has made a lot of progress since we completed our first 170 m drive in Canada 10 years ago,” Grennan says. “Jobs today are coming out with 700 to 800 m drives standard and that was unheard of five years ago.”

Additionally, on the open cut portion of the smaller diameter Bogart forcemain, Ward & Burke proposed microtunneling the whole length, at no additional cost to the region.

“That section of forcemain was not as deep, and I think there was some idea that open-cut would be a lower cost option rather than microtunneling,” Grennan says. “We worked with the engineer and the owner to optimize that alignment and offer microtunneling at the same cost that they planned for open-cut.”

All told, Ward & Burke was responsible for seven microtunnel drives, totaling approximately 5,576 m in length. The microtunneling drives – in order of completion – were 818, 731, 501, 641, 821, 950 and 1132 m.
Construction on the project commenced in June 2019 with Ward & Burke serving as the general contractor for the project, self-performing most of the work including shaft construction, microtunneling, installation of the forcemain, concrete cambers, mechanical pipework and valve installation and all tie-ins to existing infrastructure. GHD continued by maintaining an engineering overview on the project on behave of the Region.

Centerline tunnel depths varied from 5.5 m to 22 m below ground and the grades throughout were between 1.56 per cent on the initial segment to negative 0.61 per cent on the fourth drive. All the sections involved straight segments and curved portions, with the sharpest radius at 435 m. In the record-breaking longest drive, the AVN1800 navigated a horizontal curve of 500 m radius over 228 m and a flat continuous grade of 0.02 per cent.

Aside from the length of the two longest runs, the major challenges Ward & Burke faced when tunneling involved the mixed ground conditions and high-water tables that were, on average, 12 m above the tunnel centerline. The latter prompted GHD to require Ward & Burke to outfit its AVN 1800 machines with airlocks to mitigate the risk associated with a ceased drive.

“The ground conditions would change regularly from the soft clay, into sands and gravels and then to hard glacial till with boulders and then back to soft ground. That could all happen on a single drive,” says Grennan. “With long drive lengths and high-water pressures of 1.4 bar on average, the engineering design team felt that an airlock would be advisable in case wear on the cutterhead became an issue. Without one we would not have been able to carry out a face refurbishment.”

Common on larger diameter tunnels, the use of an airlock was a first for Ward & Burke on a North American microtunneling project, and according to Grennan’s knowledge was the first microtunneling in Canada to require its use. The airlock was purchased from Herrenknecht and Ward & Burke worked with ASI Marine to adapt it for use on the MTBM. The system also required Ministry of Labour approval before use.

“We did tests and trials on the system for a possible intervention. However, ultimately it was not needed on the project. The experience gained will be valuable for future jobs,” Grennan notes.

Despite changing ground conditions and a high-water table, the microtunneling was fairly low-key, which Grennan attributes to proper planning, having a robust machine mated to the right cutter heads and using a high-quality bentonite for lubrication. All of this was also important when the crews were thrown a curveball in March 2020…the COVID-19 pandemic.

“At the peak of the first wave at the end of March, a stay-at-home order was placed in Ontario. Our job was considered as essential construction, permitting us to work through the stay-at-home order,” Grennan says.
However, based on the widespread panic in society, including limited data about the virus and lack of available PPE, Ward & Burke opted to shutdown construction and assess the situation and come back with a well thought out health and safety plan in place.

“The health and safety of our workers were most important to us. It was at a time when we couldn’t get masks, sanitizer and the workers were distracted as well,” Grennan says. “When you are building a record distance tunnel, you can’t be distracted by anything else. You have to be focused on the job you are doing.”

At the time of the shutdown, both AVN1800 machines – which were used simultaneously throughout the project – were each 200 m into the 950 m and 1,132 m record length drives. Based on historical data from other projects, Ward & Burke knew that with a properly lubricated tunnel, they could stop the work and pick up again after they regrouped and do so at the same jacking forces.

“We were building these drives simultaneously and they were our last two tunnels on the project. There were some concerns from the owner and engineer that we might not be able to move the microtunnel again after a four-week shutdown,” Grennan says. “As it turned out, our predictions were correct, and we recommenced microtunneling at the same jacking force and finished both record drives without the use of any intermediate jacking station.”

Microtunneling is complete and, as this is a two-pass construction project, Ward & Burke is using DECAST’s concrete pressure pipe for the final forcemain installation. Separate crews followed the completed microtunneled sections to install the pressure pipe. Ward & Burke’s scope of work on the project is slated to be complete in July.

When the new forcemain work is complete and operational at the end of 2021, the Region’s next project for the YDSS is the in-depth inspection of the existing forcemain – the first for the forcemain since it was turned over to the Region – and any associated rehabilitation needed.

Mike Kezdi is the managing editor of Trenchless Technology Canada, a sister publication of TBM: Tunnel Business Magazine. It originally appeared in the Summer 2021 issue.