You are at:Home»News»International News»Opening of Ceneri Base Tunnel – NRLA completed 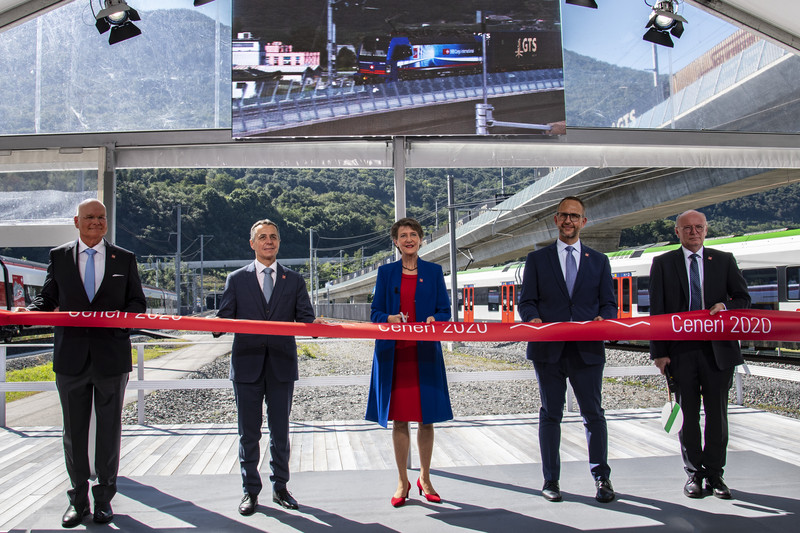 President Simonetta Sommaruga officially opened the Ceneri Base Tunnel Sept. 3 alongside Federal Councillor Ignazio Cassis and the president of the Ticino Cantonal Council, Norman Gobbi, thereby marking the completion of the New Rail Link through the Alps (NRLA) launched in 1992. This epic achievement strengthens Switzerland’s policy of transferring freight traffic from road to rail and protecting the Alps. Not only will rail travellers benefit from shorter journey times from north to south, thanks to the Ceneri, Ticino also gains an attractive urban railway. In their speeches, SBB CEO Vincent Ducrot and ATG CEO Dieter Schwank also stressed the importance of the NRLA for Switzerland and for rail travel.

Since the popular vote on the New Rail Link through the Alps (NRLA) in 1992, many people have played a part in the construction of the new continuous flat rail route through the Alps. The Ceneri Base Tunnel marks its completion. This strengthens Switzerland’s policy of transferring freight traffic from road to rail and protecting the Alps. Thanks to the NRLA – the core of the most important European rail freight corridor from the North Sea to the Mediterranean – it is possible to transport more goods by rail instead of by road. There are more frequent services for passengers between north and south, and thanks to the Ceneri, Ticino gains a high performance urban railway, halving journey times between Lugano, Locarno and Bellinzona.

“The NRLA provided the impetus for an intelligent policy to transfer freight traffic from road to rail that we can still be proud of today,” said President Sommaruga in her speech. She thanked the people of Switzerland for voting ‘yes’ to the NRLA and making this epic achievement possible. “It was a brave and farsighted decision both for our country and for protecting the Alps. The Ceneri provides fresh impetus to our traffic transfer policy.”

Federal Councillor Ignazio Cassis stressed the importance of the NRLA for his home canton of Ticino, for Switzerland and for the European continent. It strengthens the North-South rail freight corridor and allows freight to be transported more ecologically. “In undertaking this future-oriented project we are emphasizing that we belong to the European continent, which is a fundamental factor in our prosperity,” said the head of the Federal Department of Foreign Affairs.

The president of the Ticino Cantonal Council, Norman Gobbi, expressed his delight at the quantum leap in public transport made possible thanks to the new urban railway and the direct connections between Locarno and Lugano. “The Ceneri Base Tunnel will alter our identity. Thanks to the faster connections within our canton, Ticino will become more like a large town with important districts in the Sopra- and Sottoceneri,” said Gobbi.

The CEO of SBB, Vincent Ducrot, and the CEO of AlpTransit Gotthard AG (ATG), Dieter Schwank, also acknowledged the importance of the NRLA in their speeches. Guests at the ceremony included members of the Ticino Cantonal Council, National Council president Isabelle Moret, Council of States president Hans Stöckli, and delegations from the tunnel constructors, ATG, and the tunnel operator SBB. The opening ceremony took place in reduced form due to the coronavirus pandemic.

In cutting the ribbon, President Sommaruga cleared the way for trains to run through the tunnel. The inaugural train to head south through the tunnel was a freight train. Guest speakers traveled from the
south on a new Ticino urban rail composition and from the north on an SBB inter-city – thereby highlighting the importance of the Ceneri Base Tunnel for regional passenger transport, inter-city and freight transport.