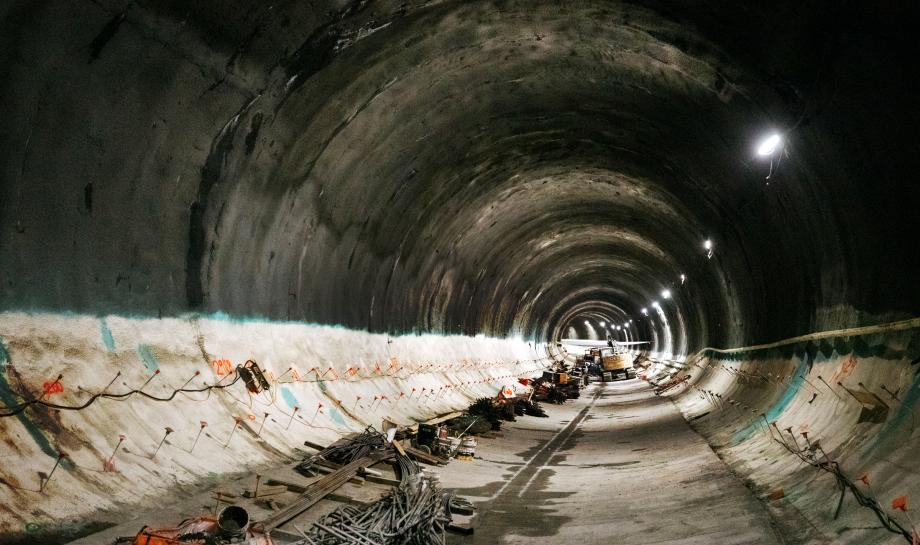 The Bellevue Tunnel under construction.

Sound Transit announced Aug. 19 that contractors have substantially completed the civil construction of the tunnel that will connect the East Main and Bellevue Downtown stations when East Link begins operating in 2023.

Excavation of the one-third of a mile-long tunnel began in 2017. Using a process known as the sequential excavation method (SEM), crews employed conventional equipment including track-mounted excavators and cutting equipment to remove soil in small sections, and support excavated areas with spray-applied concrete. Crews then applied waterproofing, and constructed the center wall and final concrete lining.

Video of the full construction process is available here.

Atkinson Construction excavated and constructed the finished tunnel. By adapting to different ground conditions, they were able to complete excavation five months earlier than expected, which helped keep the project on schedule despite delays due to COVID-19. Stacy and Witbeck/Atkinson, the stations contractor for the segment of East Link that runs from downtown Bellevue to the Spring District, is continuing to install track inside the tunnel.

When East Link light rail service begins, eastbound trains will enter the tunnel north of the East Main station at 112th Avenue Southeast and Main Street and travel approximately one-third of a mile, under 110th Avenue Northeast and turning east near Northeast Sixth Street to emerge at the future Bellevue Downtown Station.

“Working together, the city council, community and Sound Transit developed an alignment that works not only for the Bellevue community, but also for the commuters who will come to work in Bellevue,” said Bellevue Mayor Lynne Robinson. “I’m excited to ride this beautiful route through the Eastside.”

“East Link’s opening in 2023 will be preceded in 2021 by Northgate Link and in 2022 by the Tacoma Link Hilltop Extension. One year later, in 2024, we will extend Link to downtown Redmond, Lynnwood and Federal Way,” said Sound Transit CEO Peter Rogoff. “These historic investments will finally give us the true mass transit network the Puget Sound region has sought for more than a half century. They will more than double our current reach and simultaneously help fuel our region’s economic recovery.”

East Link will extend light rail 14 miles from downtown Seattle to downtown Bellevue and the Overlake area of Redmond via I-90, with 10 stations. Following the 2023 opening of the project, in 2024 Link light rail will extend another 3.4 miles east to new stations in Southeast Redmond and downtown Redmond.

For more information on the East Link Extension, click here.