You are at:Home»News»International News»Pair of Crossover TBMs Completes Triple Tunnel Drives in Mumbai 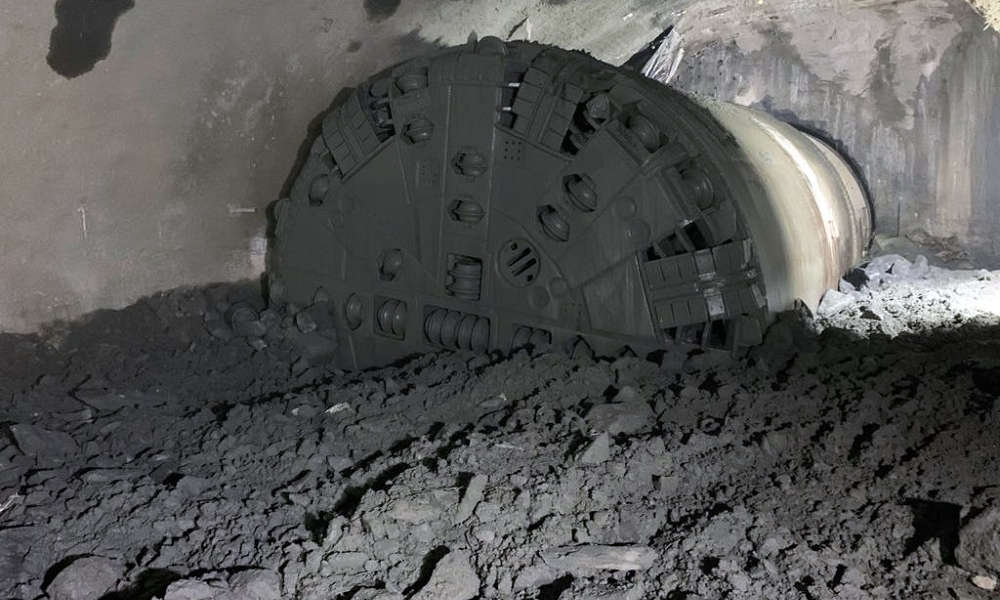 In a first for India, the Robbins Crossover TBMs were used in the benching of the NATM Platform tunnel through basalt rock in a 554 m (1,820 ft) long section from Hutatma Chowk to CST stations.

In Spring 2021, the second of two 6.65 m (21.8 ft) diameter Robbins Crossover XRE TBMs made its third and final breakthrough for India’s Mumbai Metro Line 3. The first machine made its final breakthrough for the project in late April. The tunnel drives were a triumph for joint venture contractor Larsen & Toubro and the Shanghai Tunnel Engineering Company (L&T – STEC), as the crew and equipment overcame unpredictable terrain, high-pressure water ingress, and government-imposed lockdown orders during the COVID-19 pandemic.

The two custom-built machines were selected to bore parallel 2.9 km (1.8 mi) tunnels between the Cuffe Parade station and CST stations, breaking through into several station sites along the way. “It is the first time in India that Dual Mode, Crossover type TBMs equipped with a horizontal screw conveyor and high torque/high speed (two-speed) cutterhead drives were used. Overall, the performance of the Crossover TBMs was found satisfactory and we are in the process of shifting these TBMs for the L&T Chennai Metro project,” said Mr. Palwinder Singh, Head – Tunnel Construction for the L&T – STEC JV.

In another first for India, the Crossover TBMs employed a unique technique in a 554 m (1,820 ft) long section from Hutatma Chowk to CST stations. They were used in the benching of the NATM Platform tunnel through basalt rock (removal of the bottom section of rock remaining in the station after conventionally removing the top section). “This requires fine control on the operational parameters of the TBM because only 25% of the cutterhead is excavating the rock mass, while the remaining 75% of the cutterhead has no contact with rock or soil. In addition, the TBM was relaunched without using a reaction frame, instead taking reaction from half segments erected during the benching of the NATM Platform Tunnel. These innovative concepts were accomplished for the first time in India at Mumbai Metro Line-3, Package 1, and I therefore have many reasons to feel proud on the completion of tunneling,” said Singh. 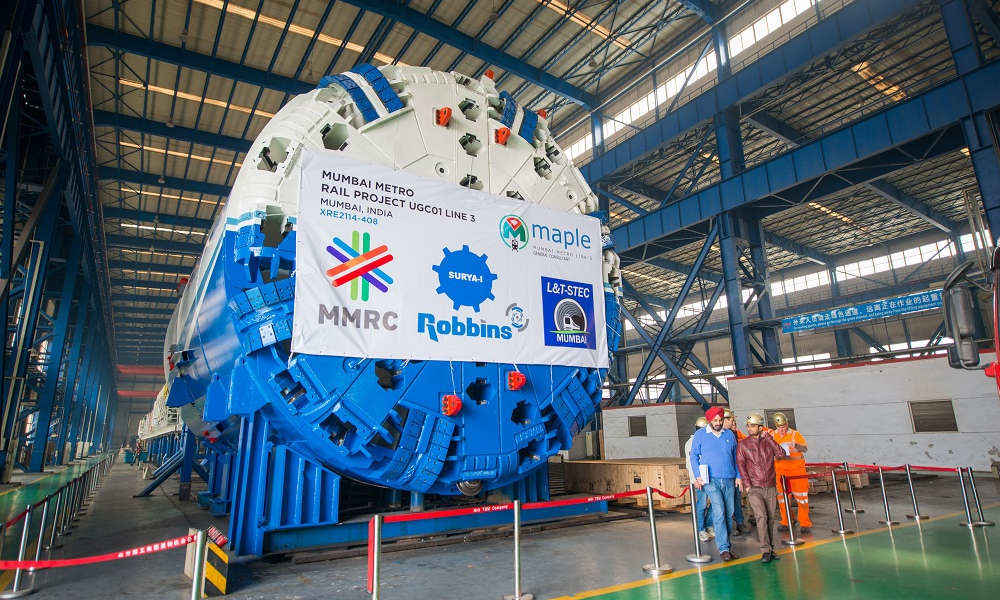 The Robbins Crossover TBMs were the first machines of their kind employed in India, using both a horizontal screw conveyor and high torque/high speed (two-speed) cutterhead drives.

L&T – STEC made impressive progress throughout tunneling despite the many exacting circumstances surrounding the scope of work. Above ground, the joint venture not only had to navigate the restrictions of working within an urban environment, such as limited work hours and the slow removal of muck due to minimal space and traffic, but also faced concern for major structures such as the Mittal Towers and the historic Bhikha Behram Well located along the tunneling route. The Crossover TBMs excavated with only 15 to 20 m (49 to 65 ft) of cover separating them from these important structures, which had to be instrumented to monitor vibrations, movements, and potential settlement.

Underground, L&T – STEC faced a complex geological mix of fresh greyish basalt, soft volcanic tuffs, shale, and breccias—consolidated rocks of angular fragments of disintegrated volcanic rock. One of the biggest concerns, however, came from the tunnels’ proximity to the coastline of the Arabian Sea. During one point, TBM 1 was only 25 m (82 ft) from the coastline, with the invert level of the tunnel running approximately 22 m (72 ft) below mean sea level. As anticipated with circumstances such as these, the Crossovers faced a significant amount of groundwater with up to 300 liters/min during their excavation.

Despite these obstacles, the TBMs were still able to maintain impressive rates. TBM 2 even completed one push in a swift 14 minutes. “In fact, the boring rate of the Crossover TBMs was never an issue for us. It was only limited by the rate of muck removal and we could have finished the tunnels much faster,” said Singh.

L&T engineers were highly involved in the specifications and designs of the machines and worked closely with Robbins to prepare for the challenges the project presented. While L&T had extensive tunneling experience, tunneling with a Crossover machine was entirely new to them. To remedy this, Robbins provided a team of key personnel to train L&T in all aspects of the machines’ design and operation. “Working with Robbins field service was more than satisfactory. Even during the COVID-19 pandemic times, Robbins field service was available 24 hours a day, 7 days a week. What else can one expect?” said Singh.

Each milestone reached on this project is another step closer toward significantly improving the lives of Mumbai residents. As the financial capital of India and one of the most populated cities in the world, Mumbai is faced with an excessive amount of road traffic. It currently takes up to two hours to drive the 25 km (15 mi) distance from Cuffe Parade to the airport—the same trip on the finished metro will take a mere 50 minutes. The completion of Mumbai Metro Line 3, which is expected in 2025, will not only save residents transit time, but is expected to initially decrease road traffic in the area by 35%, reducing daily fuel consumption by 460,000 liters.