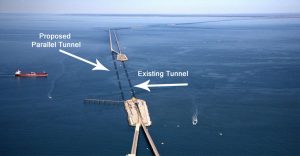 The Chesapeake Bay Bridge and Tunnel Commission hosted a groundbreaking ceremony for the Parallel Thimble Shoal Tunnel on Monday, Sept. 18, beginning at 11:30 a.m. This event was held on the southernmost island of the Chesapeake Bay Bridge-Tunnel and the public was invited to attend. More than 100 people were in attendance, the Virginia-Pilot reported.

The Parallel Thimble Shoal Tunnel is part of the overall Chesapeake Bay Bridge and Tunnel, a 20-mile-long vehicular toll crossing of the lower Chesapeake Bay. This facility carries US Route 13, the main north-south highway on Virginia’s Eastern Shore, and provides the only direct link between Virginia Beach and the South Hampton Roads, Virginia.

The crossing consists of a series of four lane low-level trestles and bridges which are connected by two approximately one-mile-long two-lane tunnels beneath the Thimble Shoal and the Chesapeake navigation channels.

The Parallel Thimble Shoal Tunnel will be approximately 5,700 lf and is being procured through a design-build contract, awarded in 2016 to a Dragados–Schiavone JV. The project is aimed to improve the level of service and safety along the current crossing, allow for more open lanes during ordinary maintenance and provide an alternate route in the event of an accident in the existing tunnel. The JV submitted the lowest price proposal at $755,987,318.

The JV has proposed to construct a bored tunnel for the new Parallel Thimble Shoal Tunnel. Construction will begin on Island 1 with the construction of a large pit. The tunnel boring machine (TBM) will be delivered to the site in several large pieces and will be assembled in the bottom of the excavated pit. After assembly of the Herrenknecht TBM, construction of the tunnel will begin.

The TBM will excavate and build the tunnel as the machine progresses from Island 1 to Island 2. As the machine excavates, the soil will be conveyed back to Island 1 for removal. At the same time, new precast concrete tunnel segments will be delivered to the TBM. The TBM will be equipped with automatic controls that will precisely place the CSI precast concrete tunnel segments as the TBM progresses. After the TBM reaches Island 2, the machine will be disassembled and removed from the site. After the tunnel liner is installed, construction crews will install the final roadway, lighting, and mechanical systems.

Concrete Sections: The tunnel will consist of approximately 9,000 individual concrete pieces. Approximately 42,000 cubic yards of concrete will be needed to make the tunnel sections.