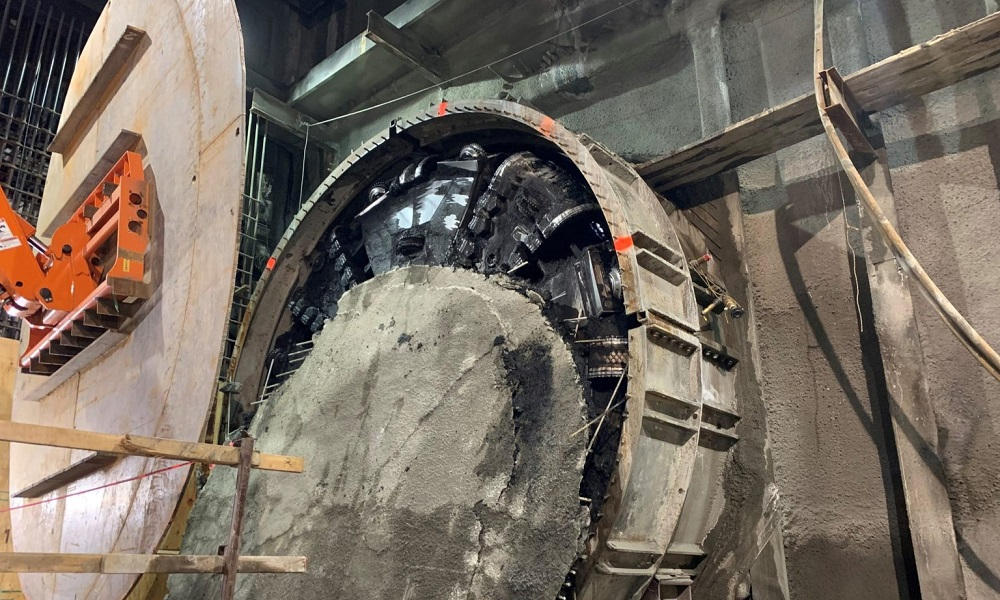 The TBM “Elsie” breaks through at the Wilshire/Fairfax station box. (Source: LA Metro.)

LA Metro reported that one of its tunneling machines has officially reached the Wilshire/Fairfax subway station near the La Brea Tar Pits in the Miracle Mile. It is the second station that the agency has successfully reached via tunnel as part of Section 1 of the massive Metro Purple Line Extension Project.

The 1,000-ton, 400-ft long tunnel boring machine (TBM) named “Elsie” started at the Wilshire/La Brea station in October of last year and broke through the eastern side of the planned Wilshire/Fairfax station site about one mile away on Saturday, April 4. The TBM is now resting approximately 70 ft below busy Wilshire Boulevard. Metro’s second TBM “Soyeon” is expected to reach Wilshire/Fairfax in about eight weeks.

Reaching this milestone is a significant win for Metro. The underground soil conditions in this area of Los Angeles represent some of the most challenging for the entire project. The agency’s modern, high-tech TBMs have mined through a unique combination of soils and geologic conditions, including tar sands and methane gas.

The breakthrough also marks another milepost in the decades-long effort to extend L.A.’s subway farther west beneath Wilshire Boulevard, one of the busiest and most congested urban thoroughfares in the United States.

“This has been an enormously complex operation that Metro and its contractor Skanska Traylor-Shea have successfully conducted,” said city of Inglewood Mayor and Metro Board Chair James T. Butts. “When this project is ultimately completed, we will have fast, frequent and reliable subway service connecting downtown L.A. and West L.A. in just 25 minutes. That will be a game-changer for all of L.A. County.”

Public works projects like the Purple Line Extension Project are considered essential activities during the COVID-19 public health crisis. Metro and its contractors are committed to ensuring the safety of all project workers during this time.

Elsie was originally lowered into the ground at Metro’s Wilshire/La Brea station site in the Miracle Mile area of Wilshire in October 2018. While advancing the TBM tunneled about 60 ft per day. It worked five days per week, 20 hours a day. It took about five months to tunnel from Wilshire/La Brea to Wilshire/Fairfax.

Metro’s TBMs are pressurized, closed-face machines that minimize ground settlement during excavation. The tunnel is lined with precast concrete segments that are bolted together to form a ring. Segments are also gasketed to make the joints between segments water- and gas-tight.

When tunneling is finished for this project section, both of Metro’s TBMs will have mined nearly half a million cubic yards of earth — the equivalent of filling 2.3 million bathtubs with dirt.

“We are proving once again that we can successfully mine through some of the most challenging conditions that any subway project in the world is likely to face,” said Metro CEO Phillip A. Washington. “We have a world-class team that includes Skanska-Traylor Shea. The team has international tunneling experience and has proven it can also be safely done here in Los Angeles.”

After tunneling this second segment, Metro’s TBMs will then head farther west to the future Wilshire/La Cienega Station. The digging of the entire four miles of twin tunnels on the first section of the project — between Wilshire/Western and Wilshire/La Cienega in Beverly Hills — is expected to be done in fall 2020.

The TBMs were manufactured in Germany by Herrenknecht AG. Metro has contracted with Skanska Traylor Shea (STS), a joint venture to design and build the first section of the project.

The $9.3-billion Metro Purple Line Extension is a nine-mile underground subway project that will extend the Metro Purple Line from its terminus in Koreatown to Westwood/VA Hospital in West Los Angeles. Section 1 is expected to be completed in 2023, Section 2 in 2025 and Section 3 in 2027.

For more information on the Purple Line Extension Project, go to www.metro.net/purplelineext.