You are at:Home»Featured Stories»Removable Hydraulic Power Unit in a Small TBM 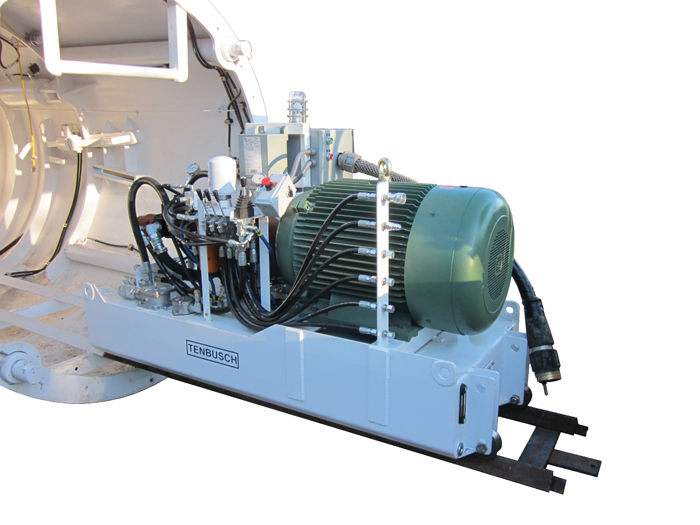 The left side of the HPU. As you can see some of the hydraulic controls were mounted on the HPU. The hydraulic quick disconnects next to the motor serviced the conveyor circuit as well as the two auxiliary circutis.

In some cases, being able to quickly remove the electric/hydraulic power unit (HPU) can keep a project up and running in high-water situations. This article discusses the development of a removable HPU for a 96-in. TBM.

The TBM was built by Tenbusch Inc. The job called for an 8-ft tunnel in the soft blue rock found in the Dallas, Texas, area. The carrier pipe to be installed in the tunnel was 78-in. reinforced concrete pipe. The reason for the large diameter concrete pipe was to drain the new lower level of a highway.

The contractor was made aware of the fact that if a substantial rain event occurred during the tunnel construction, it would result in flooding of the tunnel and the equipment in the tunnel. Because of the area being drained, the water that would be pumped to head off the flooding would have to be pumped a good distance.

The contractor presented these challenges to the team at Tenbusch. The solution was an easily removable hydraulic power unit. 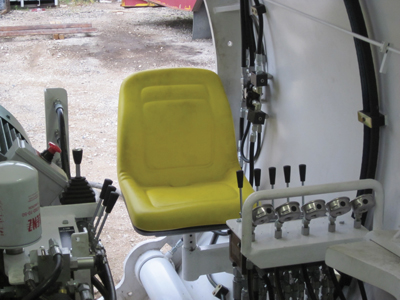 The picture above shows the operator location and controls

The lights mounted in the shield connected to the HPU with a standard plug arrangement. The hydraulic circuitry in the shield required eight quick disconnects that could be easily disconnected when needed. 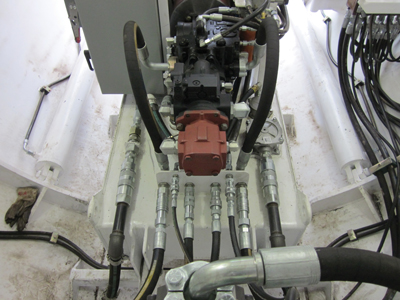 The location of the eight quick disconnects needed to quickly and efficiently disconnect the hydraulic circuitry for removal of the HPU.

There were other considerations. The TBM was expected to roll from time to time. To accommodate the roll, the pump suction lines were located on the right side of the reservoir to ensure that the pumps always had oil. The possibility of roll also necessitated a means of securing the HPU in a locked down position.

When it was time to install the HPU in the TBM for the first time, it became apparent that a special lifting aid would be needed. The HPU had pad eyes in the four corners and in order to lift it without interference between the cables and the components of the HPU, the special lift was designed and fabricated. 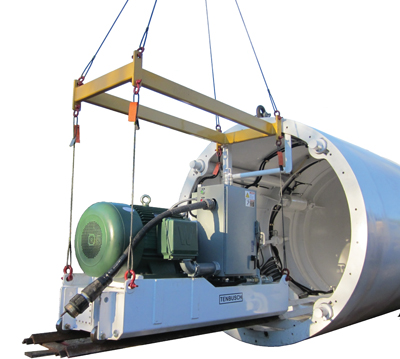 The photo above shows lifting of the HPU with the special spreader/lifting device. It was designed to assist in lifting the bulky unit from within the pit. 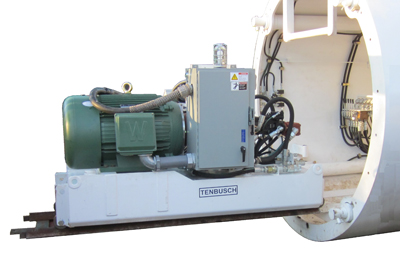 The right side of the HPU. This side was dedicated to the electrical components including the starter box.

This article was submitted by Tenbusch Inc., Lewisville, Texas. Tenbusch designs and manufactures heavy equipment for the underground construction and oilfield industries.