You are at:Home»News»Robbins EPB Breaks Through in Mexico City 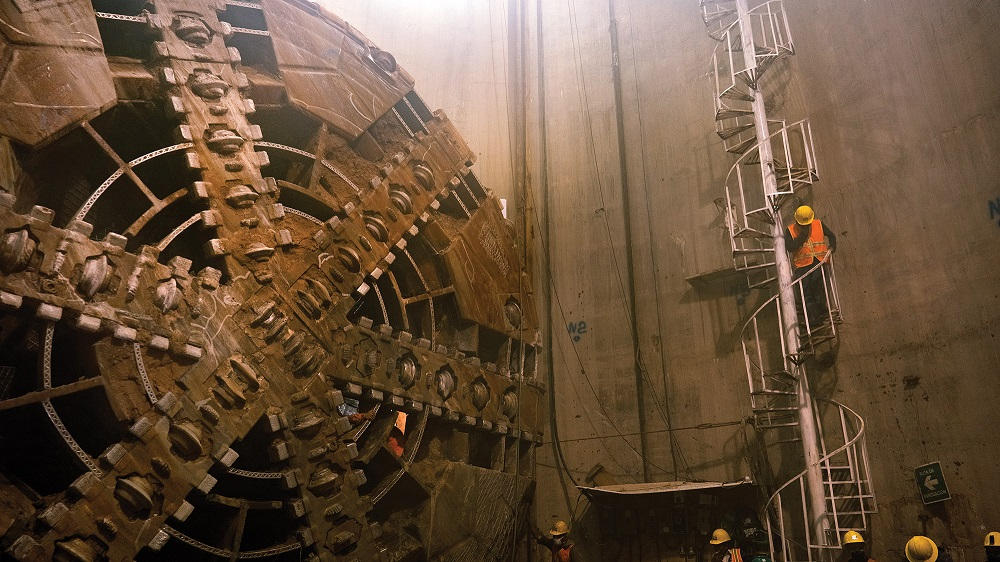 On Feb. 28, 2019, a ceremony was held to mark the breakthrough of a machine proven in both soft ground and hard rock. The 8.93 m (29.3 ft) diameter Robbins EPB and continuous conveyor system completed what is arguably one of the most difficult legs of the complex Emisor Oriente tunnel, an epic 62 km (39 mi) long conduit that will revamp wastewater treatment for more than 21.2 million people in Mexico City.

The 6 km (3.7 mi) long Lot 5, one of six lots at Emisor Oriente, required the Robbins machine to be launched from the deepest civil works shaft in Mexico, at 150 m (492 ft), and excavated mixed face conditions as well as abrasive basalt rock.

“I am proud of concluding the excavation successfully given that this is the section with the greatest depth on the project,” said José Adolfo Méndez Colorado, Superintendente de Maquinaria for contractor Ingenieros Civiles Asociados (ICA). “Robbins Field Service had an important contribution in satisfactorily concluding this section. The machine operation was of primary importance: Field Service personnel know how to operate the equipment accurately for favorable results. The speed with which they detect a problem is a favorable point to reduce downtime on the excavation.”

The complexity of the ground conditions, continued Méndez, required the correct concentration and selection of polymers, a large challenge in itself. Field Service assisted with other issues and with equipment operation: “There were some issues with the screw conveyor conveying mixed ground and also in the articulation system, which were overcome with Field Service experience. They also knew the correct operation of the continuous conveyor system, which kept us to expected performance.”

“We are very proud of this machine as it has worked in two very different worlds,” said Roberto Gonzalez, General Manager for Robbins Mexico. In 2011 the machine originally slated for Lot 5 was fast-tracked to bore a 3.9 km (2.4 mi) long section of Lot 1b—a critical part of the line that needed to become operational right away to prevent chronic seasonal flooding. “The EPB proved itself while using conveyors in the sticky clays of Mexico City with very high percentages of water content, up to 400%.” 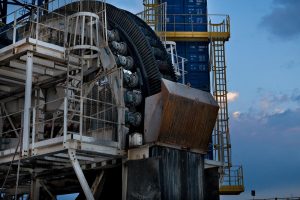 Robbins continuous conveyors were supplied behind all three EPBs and were an important part of maintaining good production rates.

The machine achieved rates of up to 592.5 m (1,944 ft) in one month—considered a record among the six EPBs (three of them Robbins) used on the project. After completing the bore in just 15 months, the machine was sent to the Lot 5 site, where modifications were made for a section of mixed ground and rock.

The machine was assembled in a 28 m (92 ft) long assembly chamber at the bottom of the launch shaft and commissioned in August 2014, requiring all back-up gantries to remain at the surface. Two months later in October 2014, after advancing 150 m (492 ft), the machine and its back-up gantries were completely assembled in the tunnel. One month later, the continuous conveyor system was installed and running. “The assembly of the EPB at Lot 5 has the record of the deepest assembly of a TBM in Mexico. It required great coordination of ICA engineers, high capacity cranes for the assembly and human resources in order to keep to the ten-week schedule for assembly,” said Gonzalez.

The Túnel Emisor Oriente (TEO) is the answer to more than 100 years of sinking in Mexico City as the result of drained lake beds and general lowering of the water table. The city’s buildings, main streets and other structures have sunk more than 12 m (39 ft) in that time, and much of the area is vulnerable to flooding. At the same time the area’s gravity-fed wastewater lines have lost their slope and are severely under capacity.

Once tunneling is complete, the resulting TEO will expand capacity, adding 150 m3/sec (5,297 ft3/sec) to the Valley of Mexico system, as well as alleviating the risk of flooding in critical areas. It will also convey wastewater to the country’s largest wastewater treatment plant. The massive tunnel includes 24 shafts, ranging from 23 m to 150 m (75 to 492 ft) in depth, plus an exit portal at the treatment plant in the Municipality of Atotonilco, in the state of Hidalgo.