You are at:Home»News»Robbins TBM breaks through nearly One Year Early in Nepal 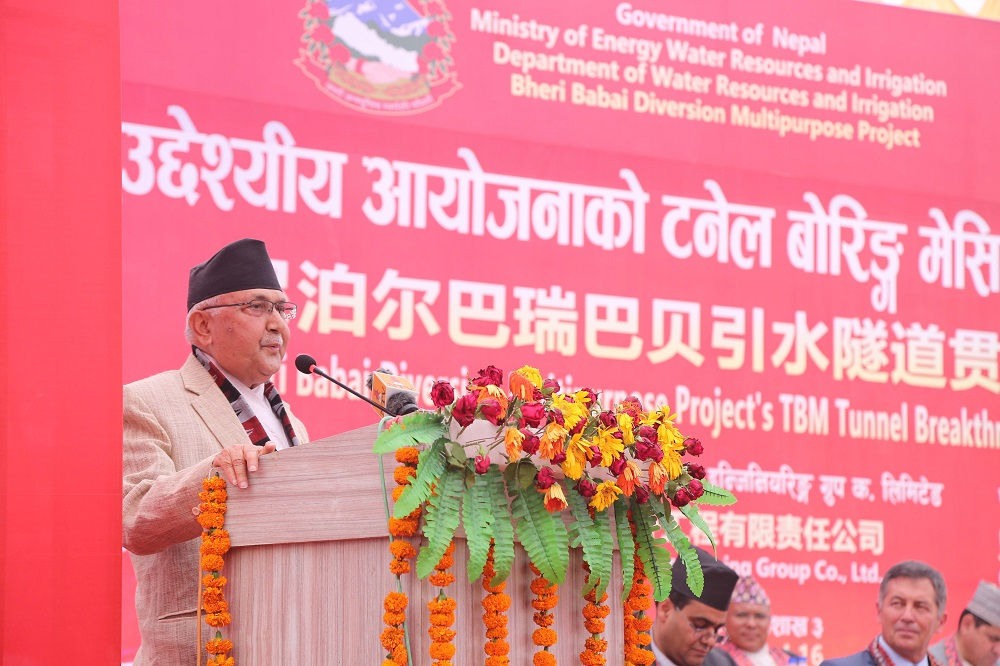 The break through ceremony featured a speech by the Prime Minister of Nepal KP Sharma Oli, where he praised the project and its success for the future of TBM projects in the country.

In April 2019, a Double Shield TBM from The Robbins Company defied the notoriously difficult geology of the Himalayas to break through about one year ahead of the overall project schedule, and seven months ahead of the TBM tunneling schedule.

The large and well-attended ceremony featured a speech by the Prime Minister of Nepal KP Sharma Oli, where he praised the project and its success for the future of TBM projects in the country. “It is not just that new technology has entered Nepal; it is a matter of great gain. The government has plans to execute various other multipurpose projects such as the Sunkoshi-Marin Diversion Project.”

The machine’s completion of the tunnel in just 17 months came nearly a year ahead of the DOI’s deadline for completing the tunnel of March 28, 2020, with the contractor’s schedule being more aggressive. “The breakthrough ceremony was great. We’re proud that we finally did it and were ahead of the overall schedule by almost one year,” said Hu Tianran, Project Manager for COVEC. 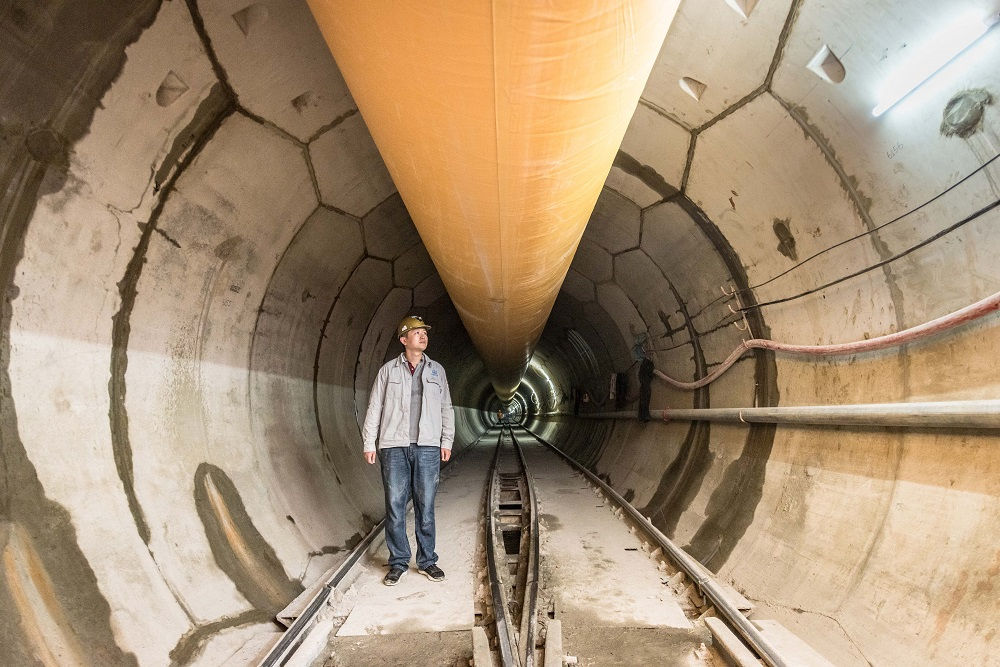 When the BBDMP was fast-tracked as one of the country’s “National Pride Projects” feasibility studies showed that drill-and-blast excavation of the tunnel could take as long as 12 years. The DOI needed a faster option, and they found it in TBMs. They began working with local Robbins representatives MOSH Tunnelling to bring what would be the first Nepalese TBM ever into the country.

The process for the DOI to acquire funding for the project and select a contractor through international competitive bidding took seven years, spanning from 2007 to 2015, when project commencement officially began. “We are proud to have introduced TBM technology successfully,” said Prajwal Man Shrestha, Robbins Representative in Nepal with MOSH Tunnelling. “Despite roadblocks and resistance along the way, we eventually introduced this technology, which broke all tunneling records in Nepal. The country has received international attention and contractors and developers from around the world are now considering Nepal for future TBM projects.”

The tunnel is located in the Siwalik Range, part of the Southern Himalayan Mountains, where geology consists of mainly sandstone, mudstone and conglomerate. “Using the TBM method instead of the conventional drill-and-blast method was the key factor for the success of this project. It has set a good example for the implementation of a large number of similar tunnels in Nepal’s water/energy/transportation projects in the future. There are promising prospects in the application of TBM technology in Nepal in my point of view,” said Hu.

To ensure the best TBM performance and to prevent downtime, machine maintenance occurred daily at a fixed time. Geological engineers analyzed the ground conditions twice daily to adjust the tunneling parameters if needed. The careful plan of excavation worked: The knowledgeable COVEC team traversed a risky fault zone, the Bheri Thrust at the 5.8 km (3.6 mi) mark, with no problems, and overcame a stuck TBM shield at another point with a bypass tunnel constructed in just five days. To cope with the conditions, the Robbins machine was designed with Difficult Ground Solutions (DGS), a suite of features including enhanced probe drilling and forepoling capabilities, as well as a stepped machine shield and smooth cutterhead design to avoid becoming stuck in collapsing ground. 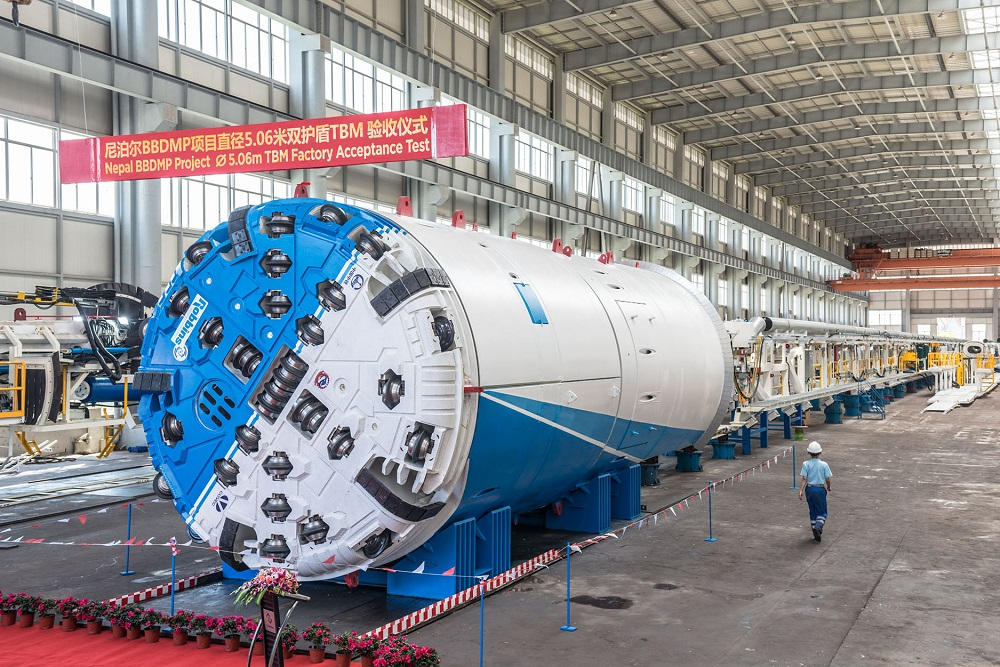 The secret to the machine’s rapid excavation is good planning, says Hu: “As the contractor and the equipment supplier jointly carried out in-depth research and detailed design in the preliminary stage, the TBM was matched to the various conditions of the project. Together with the advantages in hard rock construction that The Robbins Company has, we made an excellent performance of the TBM on this project.”

Once the BBDMP is operational, it will irrigate 51,000 hectares of land in the southern region of Nepal, and provide 48 MW annual generating capacity. It will divert 42 cubic meters (1,500 cubic feet) of water per second from Bheri River to Babai River under a head of 150 m (490 ft) using a 15 m (49 ft) tall dam, providing year-round irrigation in the surrounding Banke and Bardia districts. The estimated annual benefit in Nepalese Rupees is $2.9 billion for irrigation, and $4.3 billion for hydropower, making a total of NPR $7.2 billion (approximately USD $64 million) in benefits once the project becomes active.