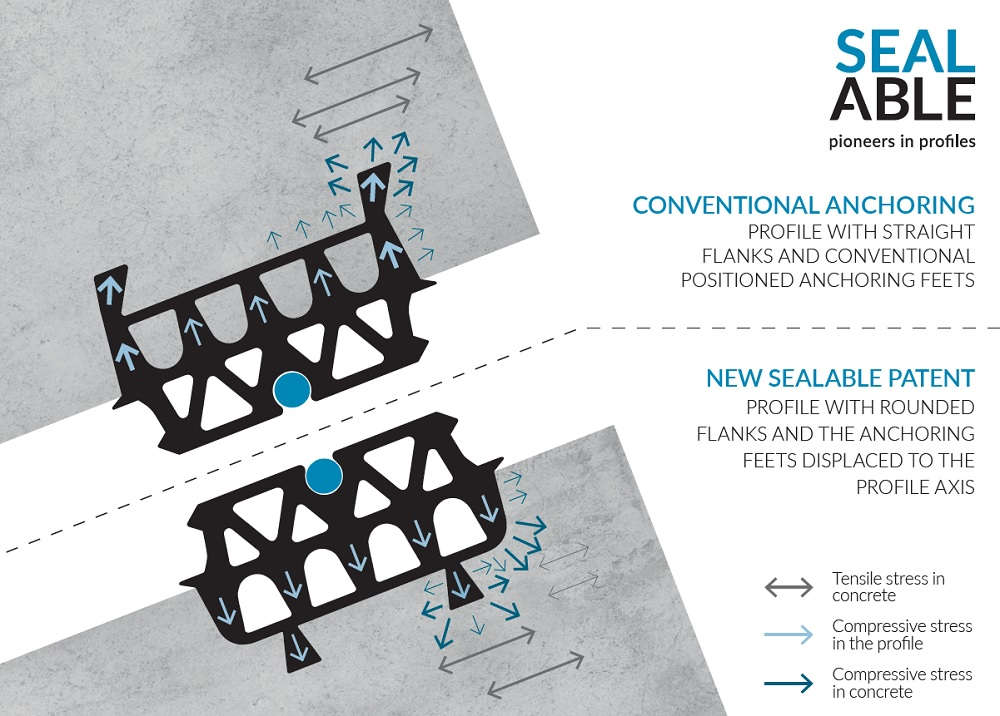 It is generally known that the design of segments tends to become thinner and thinner due to cost, handling and environmental aspects. Consequently, the contact area between segment ring to segment ring is also decreasing. This in turn means that the space available for the gasket is also becoming smaller. The gasket is pushed further and further to the outside edge of the segments. If sufficient concrete cover is not possible with the gasket very close to the edge, spalling of the concrete can occur during gasket compression, prompting water to find its way below the gasket and ultimately causing leakage. In response, SEALABLE is making an innovative and valuable contribution with its new patent.

What’s New?
Since spalling occurs largely as an extension of the anchoring foot position, it was important to shift this force and redirect it further from the outer edge into the concrete via the inwardly placed feet away from the edge of the gasket.

In order to achieve an even better distribution, SEALABLE redesigned the gasket shape as well on the flank. It is no longer straight, no longer angular, but: rounded. The tensile and compressive stresses in the concrete are shifted inwards, through the combination of embedded anchoring feet and rounded flanks, away from the outer edge of the segment.

This solution offers the advantage that the gasket can be replaced more easily if damaged. On the one hand, the cutting process is simplified for smaller groove bases by simultaneously removing the anchoring feet, and on the other hand, possible breakouts in the concrete that occasionally occur during replacement can be covered completely and offer no direct lateral attack for leakage under the gasket.

The patent is applied to anchored profiles with a groove base width of ≥ 33 mm. The first reference project is the Swinemünde Road Tunnel, where the M80382 profile (44 mm groove width) is used.

SEALABLE has been involved in more than 750 projects worldwide and 70 in North America. SEALABLE’s history began more than 200 years ago with the production of fire hoses. Through various stages and ownership, starting with PHOENIX AG, then ContiTech AG, later PHOENIX Dichtungstechnik GmbH and finally DÄTWYLER Sealing Technologies Deutschland GmbH, the organization based in Waltershausen, Germany, developed into an internationally operating company. Through a management buy-out in May 2020, we are now known as SEALABLE Solutions GmbH. With Matthias Klug and Matthias Orth as managing partners, the management team with many years of experience will adapt the structures and strategy to the needs of its market and customer segments with even greater focus.