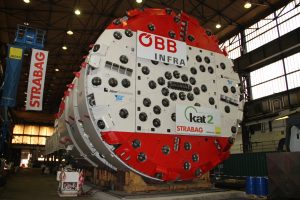 In December 2012, the final functionality tests were carried out for the first tunnel boring machine in the south line of the construction lot, KAT2, of the Koralm tunnel; in January, it was put into operation. The second TBM will begin tunneling in the north tube in March 2013. The two machines will be deployed for the main section (approximately 18 km in length) of the 32.9-km long Koralm tunnel. This tunnel is part of the new major high-speed train route between Graz and Klagenfurt in Austria.

Both Aker Wirth telescopic shield machines have a diameter of 9.93 m. Access to the underground construction work areas was a particular challenge for this project. The main components of the machine were transported to the assembly cavern in the mine via a 60 m deep shaft and subsequently reassembled there. With this project, Aker Wirth can draw on more than 40 years of experience in hard-rock tunneling. The challenges involved in the underground assembly were successfully mastered thanks to the combined efforts of the customer’s specialist personnel, the ARGE KAT2 (consisting of the companies Strabag AG und Jäger Bau) and experienced Aker Wirth employees.

With the Koralm tunnel, the ÖBB (Austrian railway system) is constructing a new high-speed train route between Graz and Klagenfurt. This will considerably reduce travel durations in the future and will also create new capacity regarding freight transport. This 130-km long key link is part of the Baltic-Adriatic Axis, which runs from Helsinki and Danzig to Northern Italy via Austria. The Koralm tunnel, with two parallel single-track tunnel tubes and a length of nearly 33 km, is the core of this railway line and will be one of the longest traffic tunnels in the world.