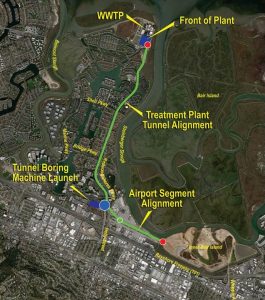 Silicon Valley Clean Water (SVCW) announced June 6 the selection of a name for its TBM that will support the agency’s $495 million infrastructure program. The program includes rehabilitating 3.3 miles of the agency’s raw wastewater conveyance piping system, involving installation of a new gravity pipeline. Other projects in the program include three new or rehabilitated pump stations, and a new preliminary treatment facility at the wastewater treatment plant.

The tunneling machine, called “Salus”, after the Roman goddess of safety and well-being, will bore 2.4 miles under the Redwood Shores Parkway right-of-way in Redwood City, to make way for a new wastewater conveyance pipeline.

Rick Einsiedl, a 20-year resident of the Redwood Shores neighborhood in Redwood City, proposed the winning name following a naming contest launched by SVCW, which provides wastewater service to more than 220,000 residents and businesses serving Belmont, San Carlos, Redwood City and the West Bay Sanitary District. A three-member judge panel selected the name for the TBM from 34 entries.

“In a mining tradition that dates back centuries, it is considered good luck to give tunneling machines a name before they start work,” said Teresa Herrera, manager of SVCW. “SVCW appreciates the community’s enthusiasm and creativity during the naming contest. We look forward to welcoming Salus to Redwood City in July and for the tunneling work to commence.”

In Einsiedl’s contest submission, he wrote “Salus (Latin: salus, ‘safety,’ ‘salvation,’ ‘welfare’) was a Roman goddess. She was the goddess of safety and well-being (welfare, health and prosperity) of both the individual and the state. As a local project that befits the people this name seems fitting for the purpose, as well as a nod to the Romans who are credited with inventing modern plumbing and sanitary management.”

Built by Herrenknecht in Schwanau, Germany, the $18.2 million TBM will be arriving from Germany in July and is an alternative to more disruptive construction options. Sixteen ft in diameter and 650 ft long with all the support elements, it will arrive disassembled and the components will be reassembled underground before beginning two years of work constructing the wastewater conveyance pipeline.

Salus will first construct a 1-mile segment of tunnel to connect the new gravity pipeline with a new force main installed on Inner Bair Island. Then the TBM will install a second section of tunnel starting from a launching shaft located north of the San Carlos airport, and extending the tunnel to SVCW’s treatment plant.