Formed in 1975, Silicon Valley Clean Water (SVCW) provides wastewater transmission, treatment and effluent disposal services for more than 220,000 people and businesses in the San Francisco Bay area, including the cities of Belmont, Redwood City and San Carlos, as well as the West Bay Sanitary District.

The SVCW Gravity Pipeline project comprises 17,560 ft of tunnel and was awarded to the joint venture team of Barnard Construction and Bessac Construction using the progressive design build (PDB) contracting method. PDB involves selecting the design-builder at an early stage, based on qualifications, to develop the initial design and construction plan, before moving into the final design and construction phase. After the preliminary phase, the contractor and owner agree to a price before starting the second phase.

The use of PDB is intended to achieve faster project completion compared to conventional design-bid-build delivery, while promoting a collaborative relationship between the owner and the builder during design and through to construction.

“Having the contractor involved at the design phase with the ability to have collaborative discussions is a significant advantage of progressive design-build,” said Kim Hackett, SVCW Authority Engineer. “It allowed us to evaluate alternatives and understand the true cost implications because we were working with the builders directly.”

Similar to conventional design-build, PDB taps into the contractor’s experience and allows innovation in the final design. In PDB, however, the contractor is brought in at an earlier stage, allowing the owner to be involved in decisions that may affect cost and risk, as well as on the finished facility and its impact on operations and maintenance staff in the future.

As SVCW’s infrastructure began to reach the point where rehabilitation and replacement were needed, staff began looking at upgrade options. Replacement of the 54-in. RCP forcemain was a key consideration. Open-cut replacement would have been disruptive to the residents and businesses in the area, and, based on public input, the decision was made to use tunneling for the pipeline replacement.

Due to the complexity of the ground conditions, SVCW embarked upon an extensive geotechnical exploration of the proposed tunnel alignment, conducting borings every 250 ft along the 3.5-mile route. SVCW provided the geotechnical data report to prospective bidders to help develop their proposals.
The initial pool of six bidders was shortlisted to three teams, which were invited to submit RFPs. Over the course of three months, SVCW evaluated the proposals and conducted one-on-one interviews with the bidding teams.

SVCW selected the Barnard-Bessac team along with its designer, Arup, as the design-builder in October 2017 based on best value. SVCW and Barnard-Bessac then set to work on advancing the design from 10 percent to 60 percent in Phase 1, during which time key considerations were hashed out in a collaborative setting. Design elements such as the final alignment, shaft construction techniques, muck removal and single-pass vs. double-pass lining were agreed upon that provided the best value while helping SVCW to achieve its goal of providing a 100-year design life for the new facilities.

“Because the tunnel was so deep and long, we wanted to make sure that we didn’t have to come back in later and disrupt the community with maintenance activities,” said Hackett. “The 100-year design life impacted almost every decision made during the design phase.”

Following completion of Phase 1, the owner had the option of retaining the PDB contractor for Phase 2, which includes final design and construction, or paying for ownership of the 60 percent design and pursuing another contracting team. SVCW elected to retain Barnard-Bessac for Phase 2.

The SVCW Gravity Pipeline is split into two drives of 5,260 and 12,300 lf. The tunnel is 13.5 ft ID, 16.2 ft OD, bored by a new Herrenknecht EPB TBM, dubbed “Salus.” The depth reaches 75 ft at its lowest point. There is one temporary launching shaft, 58 ft ID made of slurry wall, and two permanent shafts as inlets.
Ground conditions include firm and compacted clay with occasional silty sand lenses (in connection to the San Francisco Bay). The double-pass lining includes a steel-fiber reinforced concrete segmental lining installed by the TBM, followed by 10- and 11-ft ID fiberglass pipe installed after tunnel excavation.
The deeper layer of Bay Mud was chosen for the tunnel horizon to avoid an overlaying layer of Young Bay Mud that lacks strength and is prone to settlement. While digging the tunnel deeper increases construction and operational costs, it minimizes impact to the surface as well as near-surface facilities.

Much of SVCW’s initial work prior to soliciting bids revolved around the ground exploration program and the tunnel alignment. The tunnel is in the vicinity of the San Carlos Airport and the Bair Island National Wildlife Refuge, so identifying the alignment allowed the owner to secure needed permits for tunnel construction, although prospective bidders could have provided alignment alternatives if they chose.

Tunneling for the project was chosen by BBJV to begin from the Airport Access Shaft for the two respective drives. Key teaming subcontractors such as Malcolm Drilling (shaft slurry wall contractor) and Drill Tech Drilling & Shoring (Drill Tech) were utilized to assist in preparing the shaft site for efficient tunneling operations. Drill Tech was subcontracted to perform decline conveyor tunnel and TBM starter tunnel operations. The conveyor tunnel involved design-build engineering to jack/install a 9-ft diameter steel casing, 180-ft long, at an 18% decline from existing grade to 40 ft below grade connection in the shaft for future muck conveyance. Drill Tech designed the custom pipe jacking frame, and implemented this approach successfully and delivered a product that was perfectly on line and grade, which was no easy feat going through the Young Bay Mud. The two starter tunnels for the TBM drives were conventionally mined using SEM methods by Drill Tech. Each involved drilled pipe canopies and shotcrete/lattice girder lined tunnels at 42 ft in length, 20 ft in diameter, that were sequentially mined in top heading and bench methods.

Tunneling on the first drive began in July 2019 and holed through ahead of schedule on March 25, 2020, as the fallout from the pandemic began to take hold across the globe. While tunneling was deemed essential infrastructure and exempt from shelter-in-place orders, the project team implemented measures like wearing masks and trying to accommodate social distancing as best as possible. While the mask mandate has been recently lifted in California, COVID-19 mitigation measures are still in place on the jobsite.

The first tunnel segment is approximately 1 mile long and will be lined with 10-ft ID FRP pipe. While the smaller diameter liner pipe limits storage capacity, the ability of the smaller pipe to be nested inside the 11-ft liner pipe for the second tunnel segment provided significant cost savings for international shipment from Indonesia, an idea that resulted from the collaboration of the owner and builder during the design phase.

In June 2020, Barnard-Bessac began the second and final tunnel drive toward the wastewater treatment plant, a distance of about 2.5 miles, culminating at a jet grout block at the exit shaft before final break through. Prior to breakthrough, the shaft lining was excavated/demolished for TBM entry by Drill Tech utilizing a large roadheader to carefully grind out the fiberglass rebar reinforced slurry walls. Prior to the wall demolition, Drill Tech also performed pressure drilling/grouting through the shaft lining with cementitious and chemical grouts to further mitigate potential water and material inflows ahead of the TBM arriving at the shaft. Upon the demolition scope completion, the shaft was flooded with a mix of soil and water to mimic conditions the TBM had been mining through.

Concurrent with the tunneling on the second segment, crews began installation of the 10-ft FRP pipe in Segment 1 and work on the San Carlos drop shaft midway through segment 1 TBM drive. Work at this shaft proved to be very challenging and BBJV subcontracted Drill Tech to install secant piles for an elliptical shaft for future adit operations to tie into the TBM tunnel. Drill Tech utilized a custom low overhead casing drill to install the secant piles and a telescoping clam bucket excavator to dig the shaft to comply with project requirements of “non-manned” excavation in the area of historic contaminated ground near the airport and existing sewage pump station. Following Drill Tech shaft operations BBJV plans to jack a steel casing from the base of the shaft into the existing TBM tunnel to make the drop shaft connection to the Segment 1 drive. Segment 2 holed through in June 2021, and crews can now turn their attention to lining the second segment with 11-ft FRP pipe. Substantial completion for the entire tunnel project is expected by July 2022.

The use of PDB contracting is uncommon in the tunneling industry – in fact, it is believed to be the first use of PDB in the United States – but SVCW felt the model would work well for its project due to its complexity and schedule.

Herrera said that among the keys to successfully implementing the PDB contract were physically co-locating with the PDB contractor, as well as fulfilling their obligations throughout the project. “We felt it was important for us to meet our milestone dates to instill confidence in the contractor that we are going to follow through on what we say.”

According to Olivier Robert of Bessac, the PDB model helps to integrate the value engineering process into the design, as well as providing a way to discuss risk sharing and mitigation through the development of the project.

“One of the biggest advantages of progressive design-build is that we are providing updates on the design, schedule and price on a regular basis,” Robert said. “Working in that way, we can come up with the best design for the best price. On a typical project you evaluate the risk and the likelihood, and put a cost to that risk in your proposal vs. working with the owner to mitigate risks. It also provided the opportunity to explore cost saving options for the owner.”

Part of the process involved developing allowance items in the contract, according to Jack Sucilsky of Barnard Construction. For example, Barnard-Bessac included a baseline number of free-air interventions into their proposal, but also included rates for hyperbaric or compressed-air interventions should they become necessary.

“Through this process we were able to establish ground rules as partners, through back-and-forth negotiations, as well as establish a mechanism for dealing with the possibility that excess free-air interventions or hyperbaric or compressed-air interventions were needed,” Sucilsky said.

Another key, according to Michael Jaeger of Tanner Pacific, the construction manager for the owner, was making sure good information about the ground conditions was available from the start of the project. “We performed an extensive geotechnical program with soil borings or cone penetrometer testing every 250 ft, so we had a really good understanding of the soil profile and conditions, and all of that information was given to the bidders to incorporate into their proposals. That gave the owner the ability to look at a number of different options and select what might work best for them. After all, they intend to build this system and use it for the next 100 years.”

In conclusion, Herrera commented: “Progressive design-build allowed us an opportunity to establish a collaborative environment where we could make decisions on the project with the best minds around the table.” 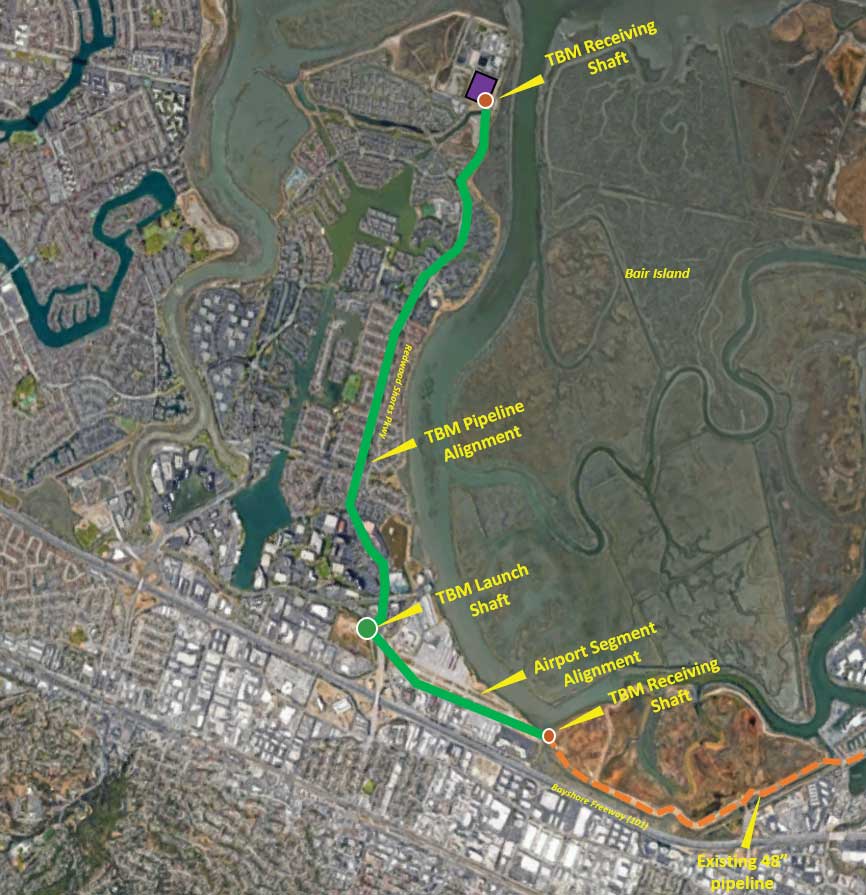