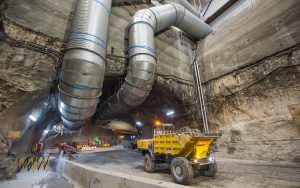 The application of the AT – Pipe Umbrella System provided by DSI Underground has helped to overcome challenging site and ground conditions in the course of the Pitt Street Station development for Sydney Metro.

During the construction of a connection tunnel in the station area, a pipe umbrella was installed underneath a busy road. The ground consisted of mixed loam for approximately two-thirds of the tunnel, with the remaining third of weathered sandstone. Unusually, each pipe umbrella pipe also had to be installed on a 19° downward decline. As a result of the mixed ground conditions and angle of installation, a high-quality drilling system such as the AT – Starter Unit with an arc-shaped button drill bit was required.

DSI Underground, the leading global supplier of products and systems for underground mining and tunneling, worked in cooperation with drilling equipment specialist Robodrill to install the AT – Pipe Umbrella System consisting of 60 individual pipes with a length of 18 meters each.

The AT – Pipe Umbrella System from DSI Underground is a pre-support measure used to increase the stability of weak ground. It increases the stability in the working area by transferring loads in the longitudinal direction and decreasing excavation induced deformations.

By using this type of connection, the time taken to install the AT – Pipe Umbrella System in the Pitt Street Station has been dramatically reduced, the site construction team was impressed by simple and easy handling.

During the project, DSI Underground provided on-site technical support at the Pitt Street site for the first week of the project, while Robodrill staff oversaw installation for the remainder of the project. Commenting on the project, Wolfgang Dolsak, Global Product Manager Forepoling at DSI Underground, said: “Together with Robodrill, we selected the AT – Pipe Umbrella System with its ground-breaking Squeezed Connection Technology to ensure an easy, safe, and fast installation. Following a brief introduction phase, the trained crew was able to safely install each pipe umbrella drill string in less than 90 minutes and keep downtime to a total minimum – a truly great installation performance.”