You are at:Home»News»International News»TBM Ready to Begin Sydney Harbor Crossing 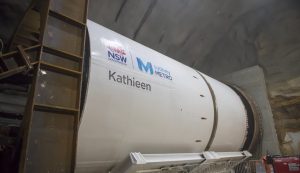 Tunnel Boring Machine (TBM) Kathleen has passed its final inspection and is now ready to launch from Barangaroo next month to dig the historic rail crossing deep under Sydney Harbor.

The 975 tonne tunnel boring machine was assembled deep under Barangaroo and will soon start digging the first of twin 1-km tunnels, 40 m below the Harbor at its deepest.

Kathleen will then build the second tunnel under Sydney Harbor after that, the whole TBM will be retrieved at Blues Point and taken away by barge. The machine is expected to tunnel through clay, silt and sediment and will use state-of-the-art tunneling technology to safely make its way under the harbor.

This specialized TBM is named after Kathleen Butler, who played a vital role in the construction of the Sydney Harbor Bridge as the technical advisor to legendary engineer John JJC Bradfield.

TBM Kathleen will join the four borers currently digging from Marrickville and Chatswood toward the harbor’s edge.