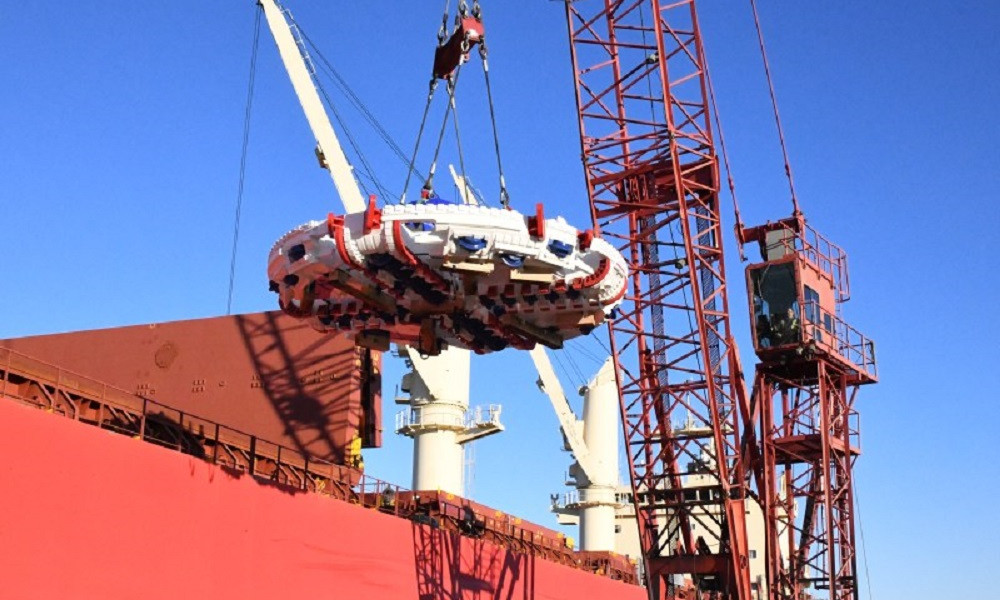 After a long voyage from Germany, tunnel boring machines that will be used on the Scarborough Subway Extension and the Eglinton Crosstown West Extension have arrived on Canadian soil. And soon, they’ll be digging into that northern earth.

All three tunnel boring machines (TBMs) were manufactured in Schwanau, Germany, before beginning their trek to North America.

The TBMs for the two projects took very similar paths to arrive on Canadian shores. When we last saw the machine that will dig the 7.8 km Scarborough Subway Extension, it was being loaded onto a massive cargo ship, called Jumbo Vision, in Westdorpe in the Netherlands.

Jumbo Vision left Dutch shores on Nov. 26, travelled across the Atlantic Ocean, into the St. Lawrence Seaway, and eventually down to Lake Ontario, before docking at the port of Oshawa.

Meanwhile, the two TBMs that will dig the 6.5-km tunnels between Renforth Drive and Scarlett Road for the Eglinton Crosstown West Extension left Antwerp on Nov. 20, before taking a similar path across the Atlantic Ocean, down the St. Lawrence Seaway, before arriving at the port of Hamilton.

“Projects like the Eglinton Crosstown West Extension and the Scarborough Subway Extension will not only benefit the communities where they are being built, but the region as a whole,” said Phil Verster, Metrolinx President and CEO.

“We’re happy to see these incredible machines arrive through local ports in Hamilton and Oshawa as part of their journeys to their respective launch sites.”

Staff from the Hamilton-Oshawa Port Authority (HOPA Ports) say they were excited to see the ships and the machines arrive at their ports and to play a role in expanding much-needed transit in the region.

“As an integrated port network, we look to create better connections for businesses and industrial users moving cargo throughout the Greater Golden Horseshoe, just like Metrolinx does for rail passengers,” said Ian Hamilton, President and CEO of HOPA Ports.

“We’re thrilled to see goods move through the Ports of Hamilton and Oshawa, which will in turn help people move more efficiently.”

Crews at the ports have already started unloading the shipping containers and other parts, like the cutterheads. This is the part found at the front of the machine that has different types of tools to cut through the ground as it spins.

The pieces for the Scarborough Subway Extension will be transported to the launch shaft site in at Sheppard Avenue and McCowan Road in Scarborough later this month and into the new year, while the cutterheads for the Eglinton Crosstown West Extension are expected to make their way to the tunnel launch site at Renforth Drive as early as next week.

For the latest project information about the Scarborough Subway Extension, visit metrolinx.com/scarboroughsubway or follow the project on Twitter @ScarbSubwayExt.

For the latest project information about the Eglinton Crosstown West Extension, visit metrolinx.com/eglintonwest or follow the project on Twitter @EglintonWestEXT.