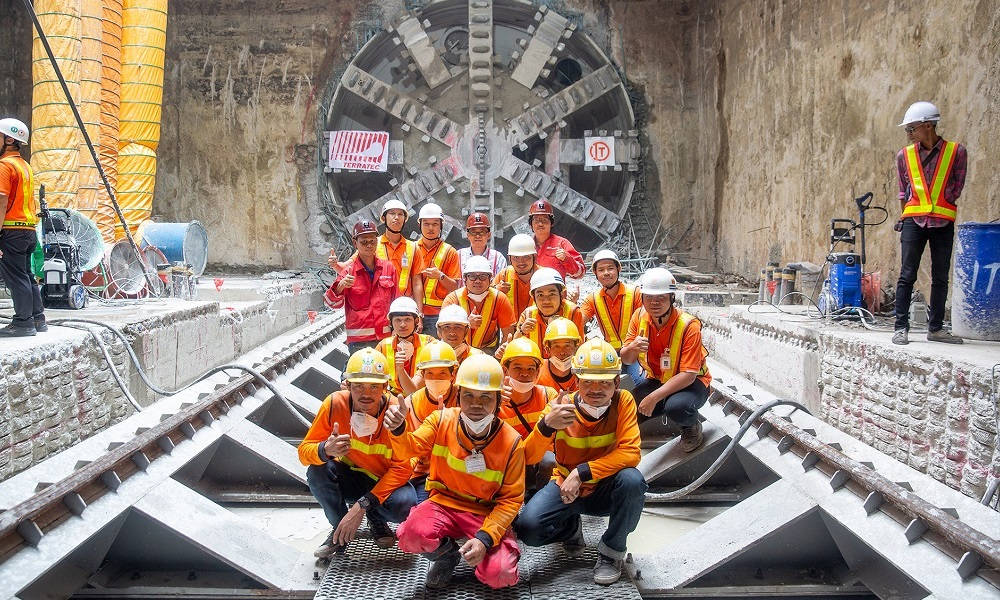 Recently, TERRATEC joined workers and officials in celebrating the breakthrough of the 6.39-m diameter S70 EPB machine by contractor Italian-Thai Development PCL (ITD) on one of three underground civil works contracts for the first 23-km long (East Section) phase of the Mass Rapid Transit Authority of Thailand’s (MRTA) Orange Line Project. The Westbound tunnel breakthrough on Contract E3 took place a full month ahead of schedule putting the project on a good footing for the upcoming Eastbound tunnel drive.

Contract E3, which was awarded to ITD in May 2017, totals over 6 km of TBM driven tunnel and three underground stations, extending from Hua Mak to Khlong Ban Ma. The S70 machine began mining westwards from the Khlong Ban Ma station box on Jan. 12, 2019, and quickly got up to speed following its initial drive. By late-March, the TBM was achieving progress rates of up to 18 rings per day and had already undertaken its first intermediate breakthrough. July 2019 marked the TBM’s best month of progress, achieving a total advance of 663.4 m and a best day of 40.6 m.

The TERRATEC S70 TBM was designed to tackle the variable soft ground geology of the city – which ranges from soft and medium to stiff and very stiff clays, with lenses of dense sand and the potential for high pressure groundwater inflows – as well as the need to mine through numerous diaphragm wall shafts and, potentially, concrete piles.

“Due to extensive project planning we were well prepared for the 3.3-km long drive and any challenges had pretty much been solved on paper before the TBM commenced.” says Bunjerd Emnuch, TERRATEC’s Tunnel Manager. “The only remaining challenge was obstruction cutting. The TBM had to cut through 10 diaphragm wall panels during break ins and break outs with only two cutterhead interventions.”

In order to handle these challenging conditions, the TBM’s soft ground cutterhead features a spoke style and the addition of back-loading knife bits to assist break-in and break-out of the shafts. In addition, the machine is fitted with an active bentonite face support injection system and double gated screw, to ensure face stability and mitigate settlement during excavation in areas of flowing sands and high groundwater pressure.

As the machine progresses along the alignment, it has been installing a precast concrete segmental lining consisting of five x 1,200 mm wide Universal style segments plus key, with an internal diameter of 5.7 m. These are being produced by ITD at the same factory used for segment manufacture during its MRT Blue Line underground works contract five years ago, which also employed a TERRATEC TBM.

“We have worked closely with TERRATEC since 2012, when we won our MRT Blue Line extension contract,” says Prakin Arunotong, Senior Vice President of ITD’s MRT Business Unit. “TERRATEC has a very similar working style to our own and because of this we consider our partnership with them as more of an ‘Alliance’ than that of the traditional contractor-TBM manufacturer relationship.”

The S70 TBM is now being prepared for Contract E3’s 3.3-km long Eastbound tunnel drive and is currently expected to relaunch next month.

Bangkok’s new Orange Line will eventually total about 35.4 km with 26.2 km aligned underground with 23 underground stations and another 9 km and seven stations on elevated structures. When complete, in 2023, the Orange Line will provide a vital transportation link from Bangkok’s city center to districts in the east, reducing traffic congestion and paving the way for improved accessibility, economic growth and new residential and commercial opportunities along the alignment.