You are at:Home»Featured Stories»Texas Mettle: TBM and Team are Making Progress and Overcoming Challenges at Mill Creek

On April 24, 2020, the largest hard rock TBM ever to bore in the United States began to operate. The 11.6 m (38.1 ft) diameter Robbins Main Beam TBM is well on its way at the Mill Creek Drainage Relief Tunnel in Dallas, Texas. The contractor, a joint venture of Southland/Mole (SMJV), has persevered on the project during pandemic conditions as the critical tunnel was deemed essential for the city.

The Mill Creek Drainage Relief Tunnel is an important project, as the tunnel will provide 100-year flood protection for east and southeast Dallas, areas affected in recent years by severe storms. The tunnel will protect 2,200 commercial and residential properties, including Baylor Medical Center. The current drainage system in these areas was constructed 50 to 70 years ago, and only provides two to five years of flood protection.

Crews are operating 24 hours a day in two 12-hour shifts. “We’ve been working the whole time, but of course the pandemic affects things. All of the support people, suppliers and others have to be working to keep this project moving,” explained Evan Brinkerhoff, Robbins Field Service Site Manager.

The crew is making safety a priority during pandemic conditions. Everyone at the jobsite is required to wear a face mask and gloves as part of regulations, to the extent possible. “We have been adapting at the site. We’re putting safety first, and implementing mandated processes. We are checking temperatures daily, doing our best to maintain social distance, and changing the mindset of crews to use best practices. We’re progressing and pushing forward. In March and April some suppliers were not as quick to deliver, but the supplier situation has since improved. I expect everybody worldwide is probably seeing the same issues,” said Nick Jencopale, Project Manager for Southland Holdings. 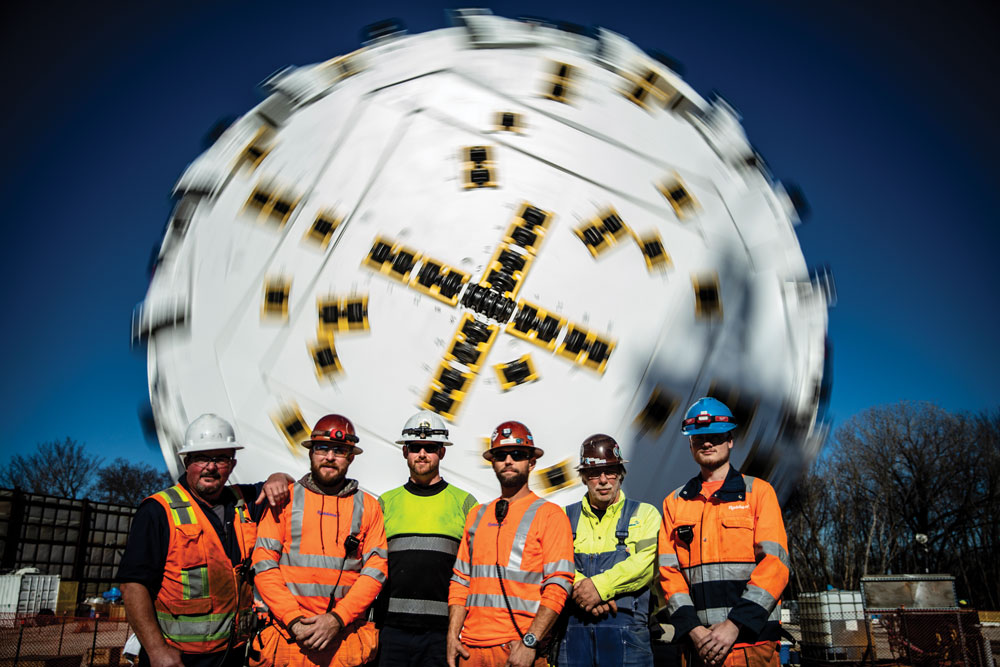 In December 2019, the unique Robbins machine and conveyor system were unveiled above ground prior to assembly below ground.

Launch and Conversion of a Unique TBM

In December 2019, the unique machine and conveyor system were unveiled above ground prior to assembly below ground. “We had the shaft and start tunnel excavation completed at the time of the ceremony—it’s a 14 m (48 ft) diameter, 37 m (120 ft) deep shaft. When assembly on the surface started, we began excavation of the 12 m (40 ft) horseshoe starter tunnel. The TBM is 70 m (230 ft) long, and the starter tunnel is 76 m (250 ft) long. Once everything was assembled and tested on the surface, we dissembled and sent it down the shaft utilizing a 650 U.S. ton crane to avoid complete disassembly. We sent the cutterhead support, forward and rear main beam sections, and cutterhead down the shaft and assembled. Utilizing a jacking system embedded into the invert, the team was able to slide it forward. We then proceeded to install the remaining gantries until the machine was to the face of the starter tunnel,” said Jencopale.

The unique machine features an adaptable design that will enable it to change size partway through the bore, to a more compact 9.9 m (32.5 ft). The dual-diameter aspect is a first-of-its-kind conversion process and will take place underground about 2.8 km (1.8 miles) into the bore. The two diameters are needed as the upstream section of the tunnel is designed with a circular cross section and peak flow rate of 42 m3/sec (15,000 ft3/sec), while the downstream 2.8 km (1.8 miles) has a higher peak flow of 565 m3/sec (20,000 ft3/sec) and was initially designed as a horseshoe cross section. Using the TBM for the entire tunnel is less time consuming and costly.

The Robbins TBM, named “Big Tex” with permission of the State Fair of Texas, has been designed with a specialized cutterhead including removable spacers and adjustable bucket lips to convert to a smaller diameter. The TBM will first complete its 11.6 m (38.1 ft) diameter section of the alignment, then be converted in a specific changeover area, which is expected to take six to eight weeks.

“The changeover area is at a lateral tunnel location. There are five drop shafts and lateral tunnels along the alignment connecting to the main tunnel. We will mine to a required station near Lateral Tunnel A, approximately 2,700 m (9,000 ft) into the bore, install the necessary support, and back up the machine 75 to 100 ft to the Lateral Tunnel A opening. This will allow personnel and equipment to access and begin the conversion process through the lateral tunnel, and pull parts out through that shaft,” explained Jencopale of the process.

An 11.6 m (38.1 ft) diameter Robbins Main Beam TBM is well on its way at the Mill Creek Drainage Relief Tunnel in Dallas, Texas.

The TBM is currently about 580 m (1,900 ft) into tunnel excavation through Austin Chalk between 12 to 30 MPa (1,800 to 4,400 psi) UCS at depths from 31 to 46 m (100 to 150 ft) below the city. “It’s a relatively good material to excavate by TBM, and it’s consistent with some fault zones but nothing too concerning. Historically speaking it’s a good formation for tunneling as it’s a softer rock and not abrasive. We had a slow start working through the bugs on the TBM, but over 1-2 months, we’ve been able to achieve about 12 m (40 ft) per shift consistently. We do have to install wire mesh and rock bolts as part of the initial support system, and the team is getting more efficient with that process,” said Jencopale.

The route is potentially gassy, so probe drilling is mandatory throughout the project. Crews are utilizing ground support including eight 4.2 m (14 ft) long rock bolts every 1.5 m (5 ft) with wire mesh and channel straps as needed. The finished tunnel will be lined with a 380 mm (15 in.) thick cast-in-place concrete lining.
“The TBM has been running well. We had a couple of more timely issues after the launch that seem to be resolved, and now we have things going in the right direction as we are gaining momentum with consistent excavation. We are tracking parts and trying to keep the right spare parts inventory on site. Overall, the machine has been running well and consistently as of late,” said Jencopale. To date the best 12-hour shift advance was 19.2 m (63 ft), which he expects to be surpassed in the near future. 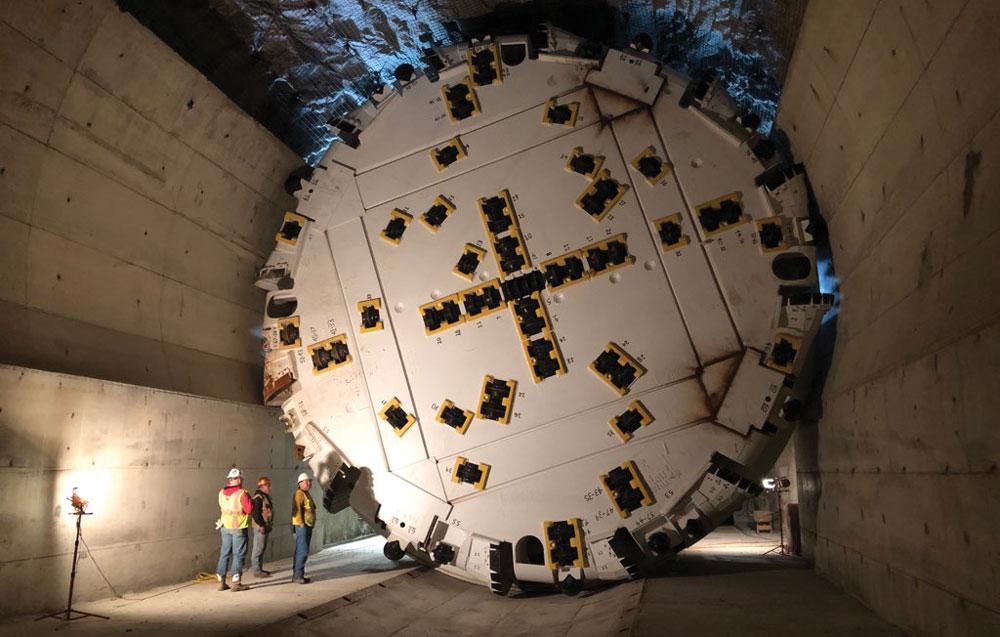 The Robbins TBM, named “Big Tex” with permission of the State Fair of Texas, has been designed with a specialized cutterhead including removable spacers and adjustable bucket lips to convert to a smaller diameter.

While the excavation thus far is going well, challenges are both ongoing and upcoming. “We’ve had non-measurable cutter wear, but our biggest challenge is trying to keep the material super dry—one drop of water and it will be super sticky. We can keep it dry, but this creates a lot of dust. We are constantly making adjustments to our ventilation system as the dust is really problematic,” said Brinkerhoff.

“In terms of excavation, one challenge is hauling the material off site. We are hauling 65 yards for every foot of tunnel excavated. The material is piling up pretty quick, but we can only haul 12 hours per day at our current location due to contractual restrictions. We are getting efficient at loading trucks, hauling out, and tracking the trucks,” said Jencopale. Because of the restrictions, the contractor has decided on a new conveyor and mucking operation to optimize efficiency. 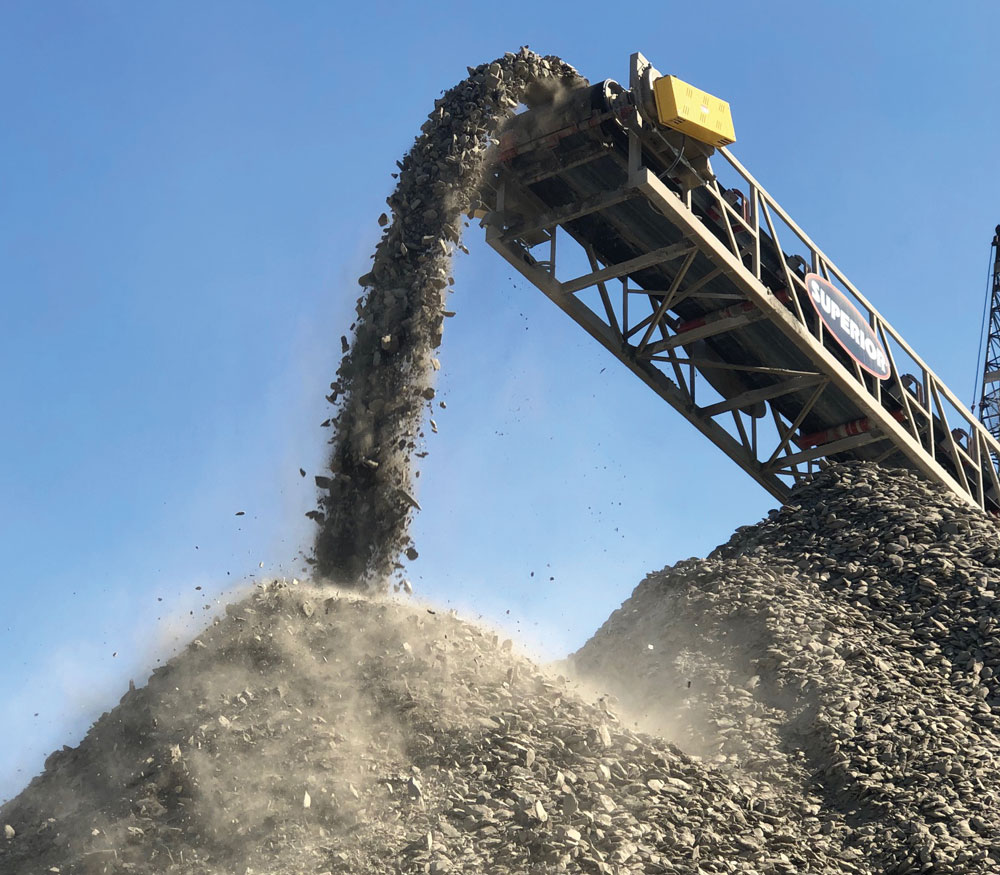 A Robbins continuous conveyor system removes muck behind the TBM as it bores 24 hours per day in two 12-hour shifts.

The size conversion of the TBM is perhaps the biggest event upcoming that Jencopale and his team are carefully planning for. “We are working on a plan with steps to take to make the conversion happen. One of the challenges is trying to forecast what steps need to happen when. We’re working on a timeline so we don’t miss any steps, and we identify all the pieces that need to be changed, modified, or replaced in order to simplify the process where possible.” 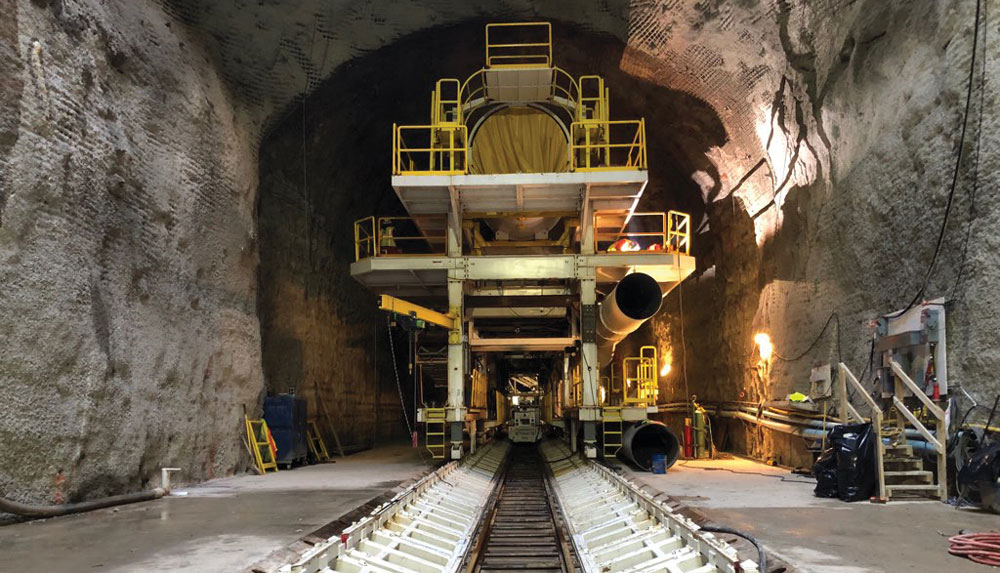 The project is scheduled to be completed in 2023, and while Jencopale is planning the excavation in detail, Robbins crew members are there to help and see the project through any obstacles. “Robbins Field Service has been great to work with over the past year. The Robbins individuals onsite have provided the expertise to identify potential issues that we might encounter with the TBM, and ways to modify our plans to make things easier. In the field, it’s not always as simple as the plan on paper. They are great at saying ‘Hey, I think we’ve got a weak link here and I have an idea to overcome these issues.’”