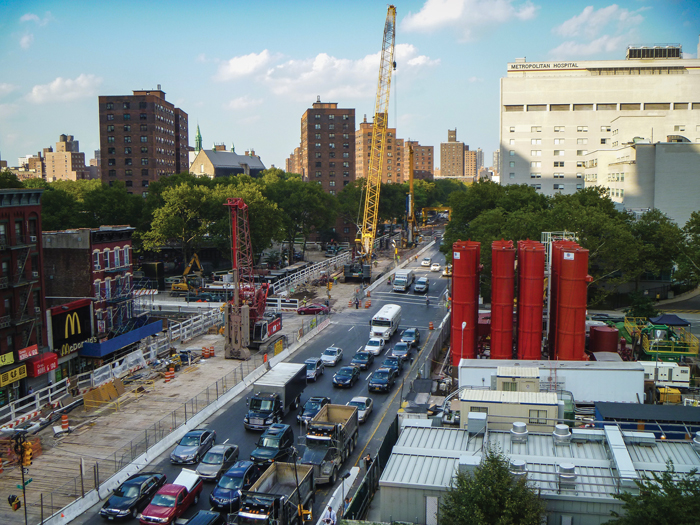 The Second Avenue Subway project is particularly challenging because it is located in one of the densest urban environments in the United States – the Upper East Side of Manhattan.

The Second Avenue Subway is a project long-envisioned by New York City planners. Currently, the densely populated East Side is served by just one subway line – the Lexington Avenue line – which is among the busiest in the vast New York City subway network.

First conceived in the 1920s, work on the line actually began in the 1970s before the city’s fiscal crisis halted construction. The project resurfaced in the 2000s, and work is currently under way in Phase 1 of the four-phase plan.

Phase 1 runs from E. 105th Street to 63rd Street, where it connects with the Broadway line to provide service from the Upper East Side to midtown and downtown. The project consists of several construction contracts, including mining the running tunnels and construction of stations at 96th Street, 86th Street and 72nd Street. The existing 63rd Street Station will be reconfigured to accommodate the new Second Avenue line. When put into service in 2016, Phase 1 is expected to carry more than 200,000 riders each weekday.

A key component of the scheme is the construction of the 96th Street Station box, which is adjacent to the launch box from which TBM tunnels were driven south to 63rd Street. The northern end of the station box abuts to existing tunnels that were constructed in the 1970s and early 1980s before the construction was halted due to the city’s financial difficulties. The project (C-26005) was awarded in May 2009 to a joint venture of E.E. Cruz/Tully Construction for $303 million. Specialty contractor Nicholson Construction was hired to build the slurry (diaphragm) walls for the station box, as well as jet grouting for a subgrade strut, buttress wall, water cutoff, temporary support of excavation, connections around installed walls and existing underground structures, and underpinning of a fragile building; low headroom micropiles and jet grouting within an existing building; and compaction grouting for fragile building stabilization. 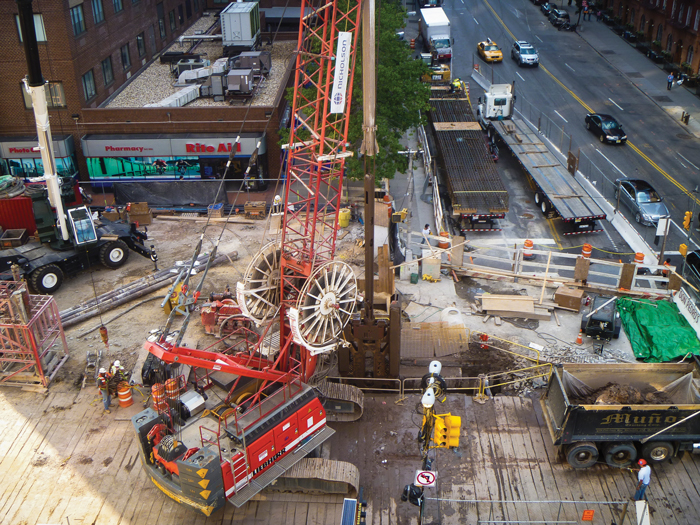 Building the Box
To build the station box, plans called for the construction of slurry wall panels along the footprint of the box. Second Avenue generally runs north-south, so slurry walls were placed along the eastern and western sides of the street. The ground in this area is near a rock-soil interface. The underlying rock is about 15 ft below the ground surface near the TBM launch point around 92nd Street, but drops quickly, disappearing below invert around 93rd Street.

The slurry walls were built in soft ground that included urban fill, clays, silts and sands.  “The urban fill consisted of anything and everything from decent backfill to bricks to shoe leathers from historic manufacturers,” said Aaron Evans, project manager for Nicholson. “Additionally, we encountered some timber piles. If the piles were located in the middle of the panel we could pull them out, but they could be problematic if they were located along the edge of the panels.”

Typical panels were 20 ft long, 3.5 ft wide and reached an average depth of about 90 ft. The deepest panels reached about 115 ft below the surface. Crews used Soletanche Bachy, Nicholson’s parent company, slurry wall excavation equipment mounted on Liebherr rigs and a Derrick slurry plant to construct the slurry walls. “One of the key aspects to building the walls is controlling the slurry,” Evans said. “Removing silt can be difficult because it is such a fine material, so you have to set up properly to make sure you can maintain the slurry.”

Urban Environment
The Second Avenue Subway project is particularly challenging because it is located in one of the densest urban environments in the United States – the Upper East Side of Manhattan that hosts more than 100,000 residents per square mile. Working within a small footprint, maintaining vehicular and pedestrian traffic, and sequencing work with active utilities required that careful thought was given to the construction activities well ahead of arriving on site

“The biggest challenge is the limited space, so planning and preparation are very important,” Evans said. “The work zone limitations affect your equipment choices, how you are going to approach the work and how you manage the spoils. Spoils management is especially important in jet grouting because with jet grouting you generate a lot of spoils quickly.”

Some of the buildings located along the alignment were also determined to be at risk of tunneling and related construction activities, and needed to be protected. Part of Nicholson’s project included jet grouting to underpin an at-risk building, as well as compaction grouting to reduce settlement from shallow excavations related to utility relocation work.

Challenges
In addition to the slurry wall construction, specialty geotechnical construction included two jet grout blocks for SOE over 115 ft deep spanning a 10- to 12-ft opening beneath a large utility ductbank. In this case, maintaining verticality was a challenge, so it was important to carefully monitor the deviation. In some cases, the contractor may drill an extra hole to ensure proper overlap of the columns. “Having that kind of a risk management approach is especially important when drilling at the depth and with the possible obstructions you may hit in the urban fill,” Evans said.

One particular issue required an unusual solution when connecting the slurry walls to the slurry wall constructed under the previous contract. During the excavation of the slurry wall panel immediately adjacent to an at-risk building, the rig encountered a concrete overpour and an end stop which it could not bore through with a conventional grab. After weighing options, the contractor, the owner and its consultant agreed that the most appropriate solution was to send divers into the 3.5-ft thick slurry panel and cut out the obstruction by hand.

The contractor fabricated a steel pipe with a window cut out that would serve to protect the divers while submerged. A team of divers worked in the blind, 50 ft below the surface using arc cutters to remove the obstructions. They were able to complete the dive work in a single day and allow the project to continue without further disruption.

Conclusion
The monumental Second Avenue Subway project has been envisioned since the 1920s and is finally becoming a reality. Building the subway in one of the most dense urban areas in the country and in proximity to existing buildings and utilities – all while keeping traffic flowing – can be quite challenging. But by working together, project team members are able to keep the project on track toward a successful completion.

“On a large project like this, everyone has to be prepared to communicate with each other,” Evans said. “There are always challenges and obstacles that arise, as well as the unknowns and inherent risks associated with underground construction, so all parties have to be prepared to react quickly to issues and have the mindset to work together.”