You are at:Home»News»Trenchless Projects in the Borough of Queens Minimizes Disruption 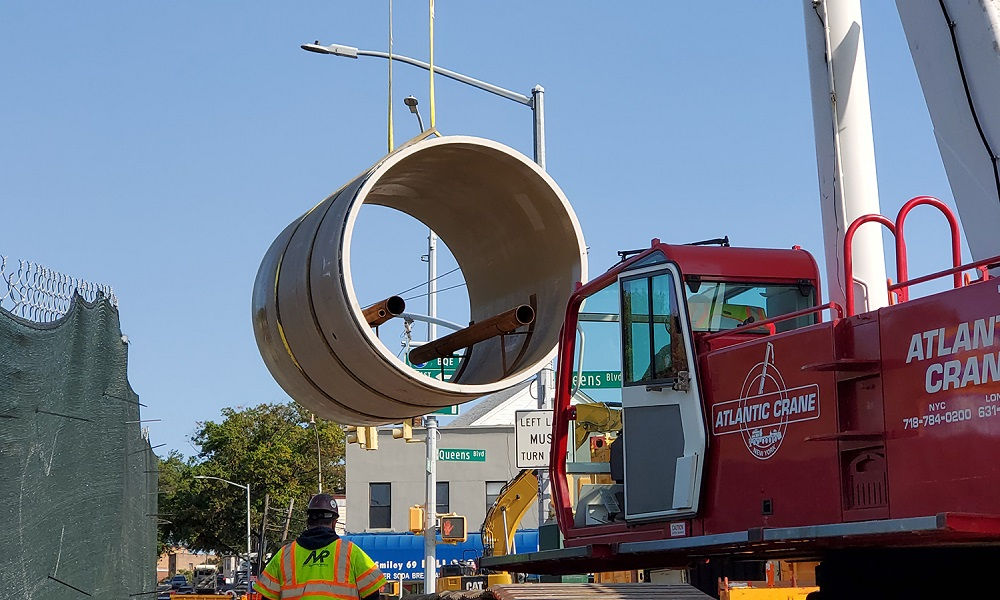 Maintaining the extensive sewer system throughout the five boroughs of New York City is a full-time endeavor. Public works construction repairs create work zones with significant concerns for both the general public and construction workers. Traffic disruptions in major cities, like New York City, are frequently met by the public with anger, disgust and frustration. In Queens, there are two recent projects where this was of particular concern. Originally designed and bid as open-cut installations, these projects addressed flood mitigation and sewer improvements.

To maintain public safety and convenience as well as essential worker safety, Northeast Remsco Construction, of Wall Township, N.J., chose to value engineer these crossing projects to trenchless technologies including microtunneling and sliplining.

During the Summer of 2020, one of New York City’s major capital improvement projects required Northeast Remsco to install an 85-in. diameter storm sewer below Queens Blvd. at 69th St. This project location is where Queens Blvd. is eight lanes wide and includes three pedestrian medians and two bike lanes – the widest and busiest street requiring open-cut crossings – colloquially referred to as the “Boulevard of Death.” Due to the change to microtunneling technology, motorists and pedestrians remained unaware of the massive 85-in. pipe being installed 30 ft below them.

Hobas pipe was chosen for this project due to the lightweight sections that are easy to handle and maneuver in the tight streets and under the LIRR overpass. The easy-to-assemble ends simplified the installation procedure for field personnel. NYC approved this installation for the same safety reasons, but realized the benefit of an extended service life and low maintenance costs.

Northeast Remsco bore the tunnel with a laser guided hydraulic tunnel boring machine (TBM) followed by 250 ft of 10-ft sections of 85-in. diameter CCFRPM jacking pipe advanced by a jacking frame. The use of trenchless construction, which eliminated the need for extensive excavation and follow-up street reconstruction, accomplished this phase in one week, rather than the two plus months expected by open-cut.

A different project, in NYC’s extensive sewer and water rehabilitation program took Northeast Remsco to JFK International Airport in southern Queens. For this project, to reinforce a deteriorating sewer in the airport’s cargo area, the City learned that trenchless sliplining would be much more economical and far less disruptive to street traffic and airport operations than open-cut replacement.

Northeast Remsco utilized a hydraulic jacking frame to slipline 42-in. CCFRPM pipe within the deteriorating 48-in. concrete sewer line in a single 1,300-ft push under Nassau Expressway to a connecting chamber near South Conduit Ave. The segmental pipe proved easy to install and able to handle the line’s approximate 10 million gallons per day high capacity flow. The pipe was chosen as the sliplining material due to its long life, corrosion resistance, easy assembly and overall low life-cycle costs. While sliplining an existing pipe reduces its inner diameter, Hobas pipe’s smooth interior surface allows capacity flow to remain at the same levels or even increase.