You are at:Home»News»Tunnel Boring Marks Milestone for Broadway Subway Project 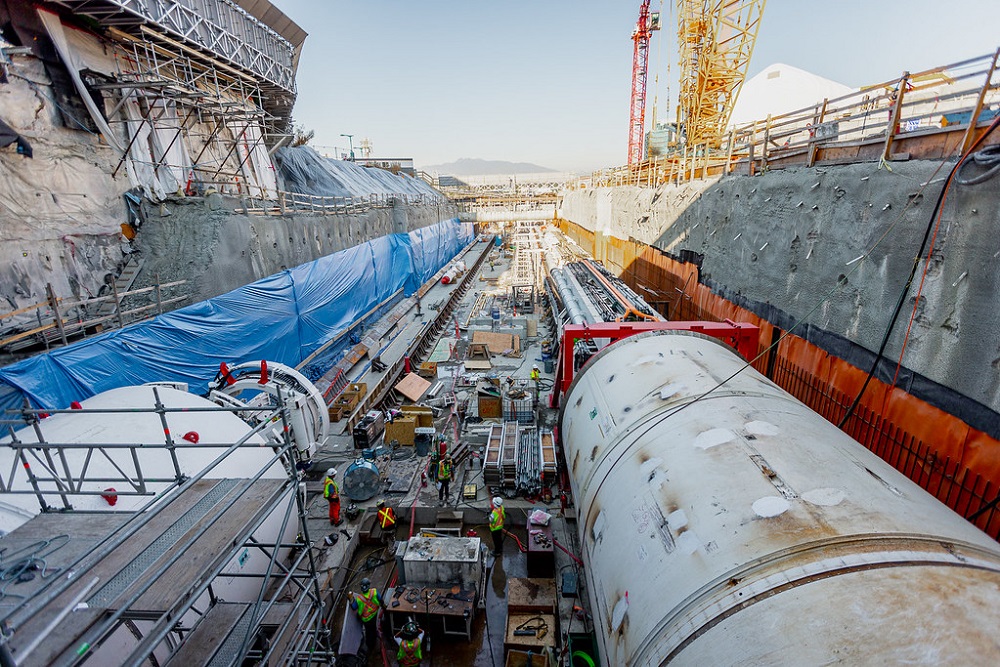 The Broadway Subway Project has reached a critical phase of construction with the start of tunnel excavation to connect six new underground stations on the 5.7-km extension of the Millennium Line in British Columbia.

The expanded line will transform the way people travel and live along the Broadway corridor and throughout Metro Vancouver and will provide faster, more convenient and more affordable travel options for workers and families.

“Investments in public transit infrastructure enhance Canadian families’ quality of life, providing affordable means of moving around their communities and getting to work more comfortably and back home faster,” said Joyce Murray, Member of Parliament for Vancouver Quadra and Minister of Fisheries, Oceans and the Canadian Coast Guard. “Our government is pleased to work with partners to expand the Broadway Line westward and create important opportunities for new communities, inclusive housing, and local businesses to flourish.”

The TBMs, each 6 m in diameter, weigh about 1 million kilograms apiece. They will be launched separately from the Great Northern Way-Emily Carr Station and tunnel 5 km to reach their destination at Cypress Street, near the future Arbutus Station.

“This is an exciting milestone for a critical infrastructure project that will transform the way people travel and live in and around the Broadway corridor,” said Rob Fleming, B.C. Minister of Transportation and Infrastructure. “The Broadway Subway will provide affordable and efficient transit connections throughout the Lower Mainland, and it’s also going to create new opportunities for affordable housing, community amenities and commercial services along the route.”

Each TBM is expected to take about a year to carve out the subway’s inbound and outbound tunnels. The TBMs have been given the names Elsie and Phyllis, after two influential British Columbian women, Elizabeth (Elsie) MacGill and Phyllis Munday. Elsie is about to start tunnelling. Phyllis is being assembled and is expected to begin operating this winter.

“The Broadway corridor is an incredibly important economic region in Vancouver and a vital route for commuters. Our government continues to make progress building this important piece of infrastructure for the benefit of people in the region,” said George Heyman, B.C. Minister of Environment and Climate Change Strategy. “The Broadway project will provide fast, affordable and sustainable transit service for people, and will mean fewer cars on the road, supporting our commitment to reducing climate pollution and building a cleaner economy for everyone. It also opens up huge potential for transit-oriented development of new and much-needed affordable rentals and housing.”

Taleeb Noormohamed, Member of Parliament for Vancouver Granville, said: “Our government has made historic investments in public transit across the country. Today’s milestone is just one example of our commitment to growing our country’s economy, increasing the resiliency of communities in the Lower Mainland and improving the lives of all Canadians.”

In preparation for the TBMs, tunnel liner rings, manufactured in Nanaimo, were transported to the construction site as crews built the concrete base slab and assembled the conveyor system to transport the excavated material out of the tunnel. At the same time, work is progressing on the elevated guideway and station locations along the line, including relocating utilities, building traffic decks and excavation.

“The Broadway Subway will be a game changer for commuters on one of the busiest corridors in Metro Vancouver,” said Kevin Quinn, CEO, TransLink. “This major milestone brings us one step closer to opening a vital zero-emission rapid transit connection that will move approximately 150,000 people per day, reduce congestion and lower greenhouse gas emissions.”

Once tunnel boring finishes, crews will complete construction of the underground stations, and install the train tracks and supporting systems. The final steps include testing and commissioning the new line.

The project will result in faster travel, better access and fewer cars on the road in this heavily used corridor. Once open, the trip from VCC-Clark to Arbutus Station will take 11 minutes, saving the average transit commuter almost 30 minutes a day and relieving congestion along Broadway.

The project will also support new transit-oriented developments, which create efficient, livable communities and maximize the opportunities provided by the investment government is making in public transit.